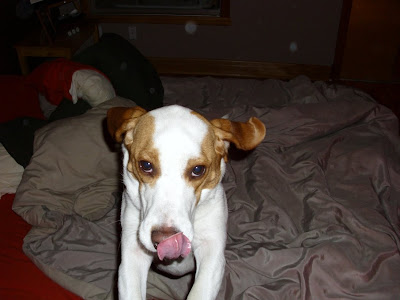 You can't plan a shot like this, but once in a while you get lucky. Georgie gets quite excited in the morning "begging" me to take him out for our morning walk. He knows we don't go out until I shower and dress, but he whines and whimpers nonetheless until I actually do those things. 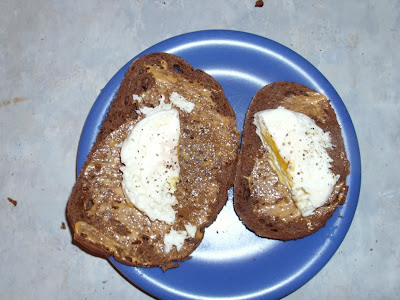 It was a workout day so I added an egg to my usual toast and cheez whiz breakfast. I always give the last bite to Georgie because I'm so well trained that way. 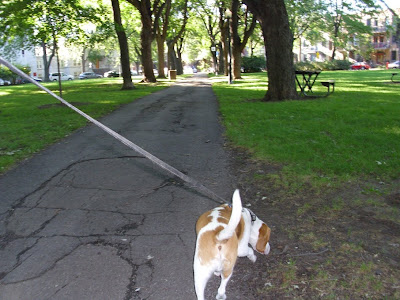 He finally gets to go on his long walk. Our circuit takes 25 minutes to complete, longer if we stop for him to sniff and play with friends. He cracked me up though because he thought a knot on one of the big trees was a squirrel and attacked it. Eyesight is not his keenest sense. 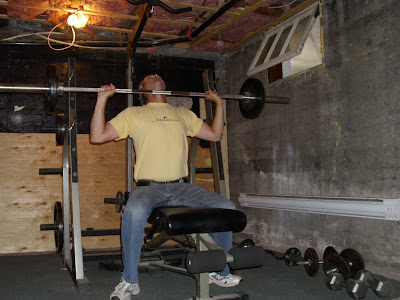 Then it was down into the dungeon to do my workout. During my two week workathon I didn't work out and I lost some strength. It will be a couple more before I get back to where I was. Three weeks off means atrophying will occur. 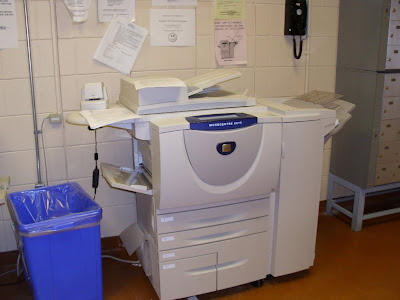 Then I got in the car, crossed the St Lawrence river to the South Shore where the college is to make all of my copies for this session. She made me 3700 copies (I've got 60 students so about 60 copies per) and never jammed once! And she was the one I wanted to KILL last semester. (In French it's a she.) She must have a good doctor. 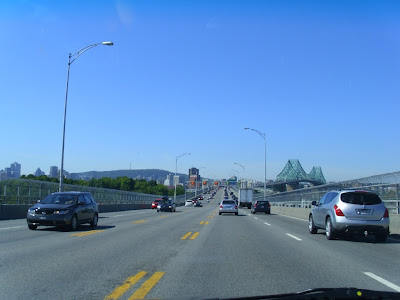 Back over the bridge to the city. It was a gorgeous day which is why I decided to do my photoshoot then since today was predicted to be gray and gloomy, which it is. It was probably the nicest remaining day of the summer. I spent a good hour sunning on our patio with the Saturday paper, which up here is the big one of the week. 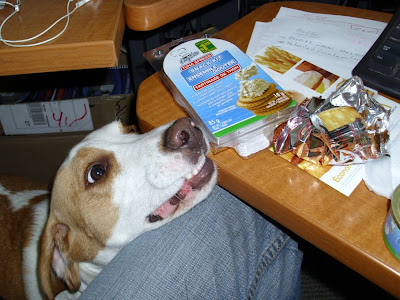 I had a light lunch because I'm dieting and because we had a dinner party to go to in the evening. Georgie's manners are sometimes lacking. I know that's my fault, but he's so darn cute I can't get mad at him. 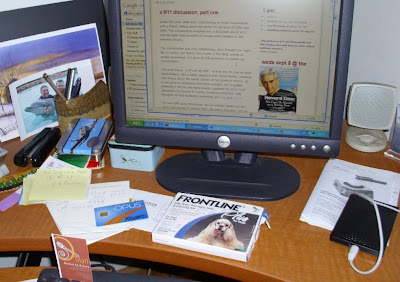 Then I spent some time on the computer. Got really interested in reading about 9/11 mostly because I'm so over the "let's play victim" thing we Americans do every year. Honestly it's like we take ourselves so dang seriously but we don't give a darn about the "terrorism" we inflict abroad. 140,000 Iraqi civilians killed as well as 4700 of our servicemen to invade and seize a sovereign country for NO REASON. But we are the victims? I was hurt and angered that day as well, but after having informed myself over the years I've learned that something like that was inevitable due to our arrogant trouncing around on the planet. We let Oklahoma City and Columbine go pretty quickly, can we let this one too? I'm guessing not. It's okay if you don't agree with me, I know I'm in the wee minority on the topic. 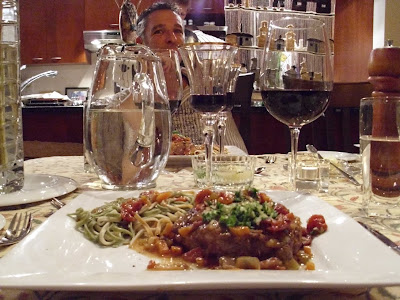 My new friend Rita invited us to dinner and she treated us to a lovely evening with fabulous food. Here's my portion of Osso Bucco which was so tender, juicy and flavorful, it was easily the best I've ever had. Didn't this shot come out neat, too? 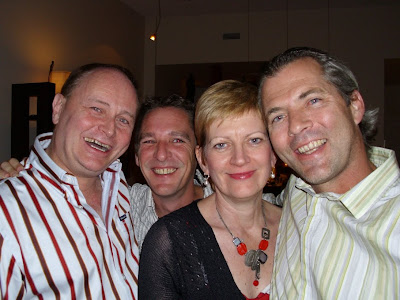 We had lots of boozy goodness too. A martini, then champagne, chianti, brolio, and porto. We took public transport to get there and grabbed a taxi to get home. It was a great night and I'd love to do it again sometime. 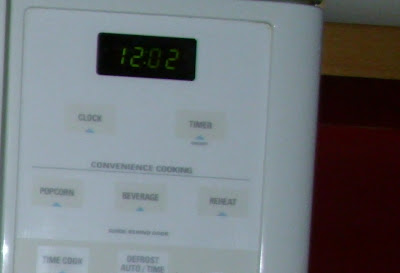 We got home after midnight! This is quite the feat for me since I'm usually sound asleep well before 10. I even stayed up and watched the rest of SNL, a repeat from 4 or 5 years ago. I didn't laugh once and I thought, "Why did they pick this lame episode to rerun." My inner curmudgeon is hatching I believe. 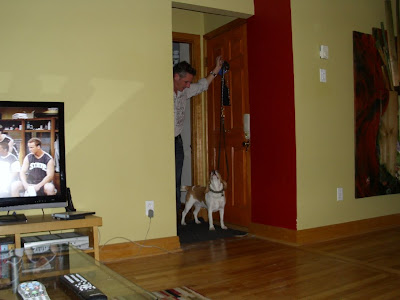 Serge had nightly walk duty. I had done it alone the night before so payback was he had to do it alone. Normally we do it together, a little family walk together every night. We'll get back to that routine today.

There you have it, my day in pictures. To see what other peeps around the world take pictures of on their day, visit Chad's blog.
Posted by tornwordo at 11:26 AM

I love these. The bridge shot is nice....so are Georgie's ears in motion.

working out. you're making me feel very lazy. i haven't done this in forever haha.

I'm with you on 9/11. We are blind to the terror that we have visited on others. With arrogant, self-important people it is often said that "no one is indispensable". I think history proves that it is also true of nations. We had better learn that lesson - and quickly.

You're not alone about the 9/11rhertoric. It disgusts me.

Ahem - the reason the copier gave you no problems is because it is in fact a Xerox product. They definitely know how to make copiers and high speed printers.

Georgie is getting nice and spoiled I see. He is cute but the cuteness wears after a bit.

I do something similar with Angie the cat. She likes cheeses and Serrano ham as well as my tomato sauce, milk and that's about it so far. But she's very polite about it.

Unlike prior feline residents, she won't reach out and try to grab food from you. She just sits next to you and waits.

If you're in a minority, it's at least a fairly large one. I'd been saying for some time before 9/11 that the really surprising thing was that we hadn't had more domestic terrorist attacks. The problem, of course, is that Americans tend to live in a bubble. Plus ça change....

Great shots! I'm happy the copier worked for you!

I agree with you about the whole Sept. 11th thing.

I too have had it up to HERE with the faux rah-rah patriotism and flag waving. it's over, it's done, now let's stop trying to be the world's policemen and clean up our own terror house. let's see, where should we start...rev. terry jones, the KKK, the tea party people, sarah palin...

I actually posted on Saturday about how I will feel sorry for those who died or were injured (or lost someone), but I also want to recognise that for many people, it was and STILL IS a birthday or anniversary, and if we constantly live in the past, their day will forever be tainted by the actions of a few.

I think the problem is in how we labelled the event - 9/11. Hiroshima and Pearl Harbour are still remembered for the devastation that occurred, but I bet not many could tell you the date without looking it up. The problem is that by labelling it 9/11, we forever tie the events to the date - making it hard to move on.

Anyhoo - love Georgie and we got lots of photos here, so I'm happy. Such a cute pup.

The picture of Georgie begging at your lap is priceless. I really enjoy your twelves.

It's not every day a person wakes up to witness 3000 people being murdered on live television. The significance of Sept. 11 should not be forgotten or even shelved, but neither should it be exploited and I see more and more exploitation happening each year. Can't we just remember it in silence and with great reverence?

It sickened me this year to see all the protests against the mosque being built near Ground Zero. Totally ignoring the muslims who died while working in the twin towers. At least there was a counter protest, but if 9/11 becomes an excuse for bigots to promote hatred against muslims in America, then it has lost its significance as a memorial to civilian loss

...still think you should take Georgie out 1st, then come back in and do your human duties which seem to get you on with your day....'US' doggies are always holding our pee/doodoo...enough ;-)))

Indi has me so well trained that the very instant after I put her food down in the morning, I run into the living room and put on my shoes and socks before she finishes eating because if she sees me doing it, she whines non-stop until I walk her. Hello, sometimes I just want a cup of coffee first!

Seeing the box of Frontline on the desk has me wondering... do you use this year-round or do you take a break in the winter? I do the latter as it saves the $17 bucks a month from Dec - Mar.

I heard one fellow say that Americans have never treated anyone badly and couldn't understand the violence of 9/11. Oh really? I think the Native American Indians would disagree along with the slaves brought over from Africa. Now, there are still many areas of the country where Gays are persecuted for being different.
The pictures are nice the one with Georgie licking his nose is so precious! Ted

And I too am perpetually surprised at how quickly I lose tone and strength from workouts. So unfair.

Love the Georgie pics as always. :)

Agreed about 9/11. 'Twas horrible, but just as horrible as what others deal with daily. I couldn't comment on it this year - healthy respect for the dead, but live in the present.

What a funny and cute dog your Georgie is :-). Nice pic and thanks for sharing :-).

Have a nice day and greetings from Germany.

Your puppy is cute!

My favorite shot this month is the dinner table.. it's such a complex shot - it has everything in it. :)

It's always nice to check in on your 12 of 12 photos and to see how a fellow expat is doing in his country of escape. I too like the one of the dinner table and as usual any picture with the dog in it is a winner. Anyway, thanks for sharing and i look forward to next months photos.

I am "in a book" so I was late reading this. Always love your posts. Hugs to Georgie and Serge and of course to you.