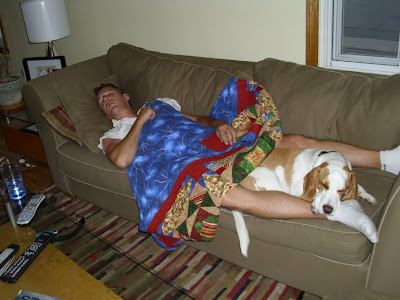 The sleeping beauties with the fabulous quilt. It really is time for a new sofa set though. This one is 9 years old now. Ten is about the limit for fabric sofas don't you think? And what about leather? Anybody out there can assuage my fear that leather is not as comfortable as fabric? I get the upsides of leather, durability, ease of cleaning, pretty to look at, but the downsides concern me. Sweat inducing, slippery, taunting Georgie as though it were a giant chew toy. And let's not forget the price, though ostensibly it lasts longer so maybe it ends up being cheaper in the long run. If you've got the leather furniture, weigh in won't you?

There is sometimes a bright light in the eastern sky at night and Serge has been insisting that it is the international space station. My disbelief really rankled him so he sent me this link to prove it. It's true! It's usually only there for a few minutes but it's quite bright. It's really strange when it disappears behind Earth's shadow, one moment it's shining brightly in the sky like Venus and the next it twinkles out of sight. 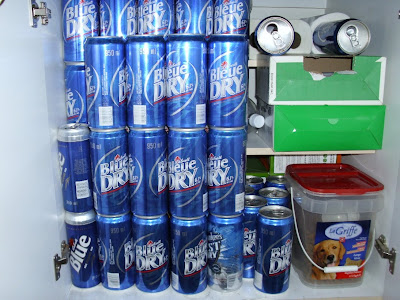 I called Serge out on this. Usually he keeps the recycling of "deposit" vessels separate from the other recyclables so he can give it to a certain homeless guy around here. When I saw this, I called him out on his laziness. You know what he said? "It's for my solar panel I'm making." I have no idea what is going on in that head of his, but I'm curious. He says it's for winter time. I'll let you know if anything ever comes to fruition.

You'll get a kick out of this. Remember how I've been doing a weekend contract for the last month? No? Well I have been and it's over now. Anyway, we were doing a class last weekend just one student and I and at the break I had to use the bathroom. Now we were in a skyscraper downtown with nobody in it. For the month we had never seen anyone in the building except us. As I was heading to the restroom, I did what I do at home which is pull out the equipment on the way so that once arrived at the toilet, the waste can fly. Imagine my horror as I walked into the bathroom with my dick in my hand outside of my unzipped pants as I meet face to face another person. I'm not sure the other person even noticed (God I hope not) as we met in that he's-just-coming-out-the-door-as-I'm-going-in kind of way. Me? I was mortified. I have got to be more attentive to my behaviour outside the house.

I've got a class this morning and then three days off! Hope y'all have a great labor day weekend.
Posted by tornwordo at 7:29 AM

I like them both, but the leather is firmer and I like that. It's a soft leather and the cats have been great at not clawing it at all. It cleans up nicely.

I've never found a cloth sofa I've been fond of.

Your mom is going to love that photo! Spouse might have a fit, even though his modesty is preserved while he gets to show off his legs...

Most importantly, where is Serge going to sleep if you get a new couch????

I love leather. (Make of it what you will.) And I used to sell it. Leather is skin: it breathes; it doesn't make you sticky. FAKE leather is made of plastic and it will.

You want to insist on two things, top grain and good springing*, because good leather lasts forever. Also, a closed finish will not absorb liquids. You can tell by running your fingernail across a tight portion: if it leaves a scratch, it has an open finish, which is extremely high-maintenance.

A lot of furniture today is made too large. Sit in it to be certain it will fit you properly. Will you be watching TV? If the seat is too deep you will be looking at the ceiling. I highly recommend Hancock & Moore, a ten on a scale of ten. Let us know what you get!

Definitely go for leather! We were hesitant at first because of the care, the dog, the heat etc.
But rest assured the advantages outweigh all of the above. Care: easy. Dog: no prob with a light throw under her. Heat: actually it stays cool all year, even in this heat.....no slipping or sliding!
AND, it keeps it's shape much better than fabric sofas that are used a lot.
There! Convinced?
Yes indeedy do....watch where you are using public facilities! lol
Jim

I had a leather sofa year ago. I liked it but it looked dated after a while so it had to go. Look for a classic design so it will stay in style. I didn’t have any pets so I would be cautious about dog claws and leather.

I have a cheaper set of leather loveseats and a chair that I got at the Brick. I will never have another set like it as long as I have pets. It didn't really have a scratch on it until I got a cat. Not that he claws at it or anything, but when he runs across it, wham. And then the dog punishes us when we leave him for too long and jumps up to sleep on the furniture. He's a digger. My stuff is scuffed up terribly now. I had a cloth sectional set that we had for almost 15 years and one of Derwood's co-workers now uses it. It had a good solid back on it and some foam cusions that were a dream to sleep on (and it didn't look frapped out if Derwood slept on it!)

So funny about your dick!

We have a leather couch and it's good for pet wear and tear, but it is slippery = sometimes uncomfortable.

Not a fan of leather for sleeping/lounging on. Also, unless you go high end, leather to me looks cheap. My parents have a gorgeous leather sofa but we mainly sit/relax on the fabric ones which get recovered/recycled every ten years or so. The leather one is going on 40, but again, it's not highly used and is classic.

Leather is not comfy and pleather is even worse, so stick with fabric.

On the other issue, I didn't know you're a flasher! ;)

Given that I have a serious case of the pee shy, I will never be caught whipping it out in a public washroom. It's pretty much stall or nothing for me.

pix or it didn't happen (the flashing story)!

have a great weekend, all 3 of you!

I have so many things I want to comment on for this post :) but I will stick to the question about the sofa. I say go for the leather but make sure it is top grain bcs they feel wonderful and last forever. The one we got 15 years ago and use every day is still in excellent shape and I would not be surprised to see it still around in another 15. And choose one with classic or simple lines so it never dates.

Happy weekend to you guys too!

Oh, and I just LOVE that quilt.

We have a leather sofa that is weathering quite nicely. It was kind of distressed by design to begin with. Leather can be comfortable depending on the type of cushioning. Our has those tacks all throughout it that create little mounds of cushioning all through out. It's very firm, so I don't consider it very comfortable.

Surprisingly, the dogs don't chew on it (just everything else). They have an aversion to leather it seems.

Maybe compromise, and try Toad Hall furniture. We have a Toad Hall sofa that is leather all over, except for the seat cushions and backing cushions. We use that mostly. The other sofa at this point is mostly to look at, unless we have guests over and need extra seating.

Good luck in your search.

Leather is my choice...thought it would be too slippery but, nope, it's just right. You can turn easily without getting your clothes all twisted. Really a well designed leather coach/sofa/whatever is a good choice. Don't get sucked into the cleaner solution to save the leather for 1000's of years to come. Not worth it.

Is the person in the first picture giving birth to a giant dog?
In the pulling it out story, weren't you afraid of cameras? The security guard may have got an eyeful.

I can't imagine unzipping my pants or lifting up my skirt before being safely installed in the bathroom. How much time do you need to save?

Would've loved to have seen your face at that moment though.

Blue Dry. I gotta look for this! Can't wait to see the solar panel, lol