The opposite of a snob 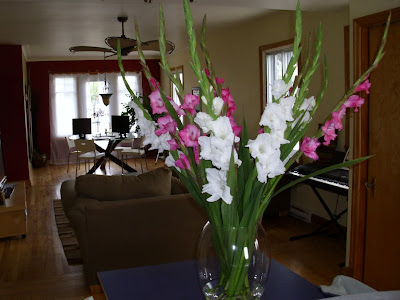 The glads I got from the market opened up nicely this time. The trick I now know is to keep cutting a bit off the bottom to get the flowers to all open up. One of the bits I cut off fell on the floor and Georgie pounced on it, chewed it into a million bits and ate some. It's times like those I hope his instincts are good and he won't eat poison. (Yes I know about chocolate.) 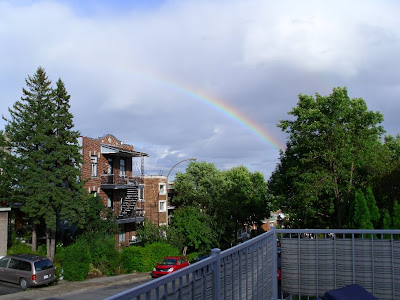 That was a little sky gift yesterday. The diet I'm on is going well. Five pounds in 3 weeks. At first I was hungry all the time but after a while it's like the hunger stops throwing tantrums and calms down. Or I got used to the feeling. It really reminds me of quitting smoking. You have this urge, this desire seemingly coming from every cell in your body and you tell it NO! Now I'm working on associating this "pain" with the gain of losing weight. I never eat enough to actually be full, and pooping (you knew I had to go here) is not the same at all. I get the urge during coffee as usual but then a tablespoon of something spatters out and that's it. All done. You know what I'm really craving? A big satisfying dump, but I guess my bod is absorbing everything these days. 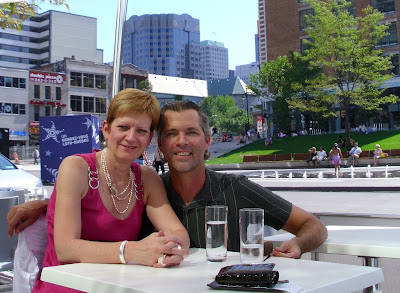 Here's me last weekend with Rita on our last day together. (She said she didn't mind me posting this.) We spent 40 hours together and the time just flew by. I'd say this is the second time I've hit it off as well as someone I've taught. The first became a friend but then eventually moved to France. What's really weird? We did the Meyers-Briggs personality test and she is the first person I've ever come across who scored exactly as I do. INTJ. Not that I test everyone, but I have done it many times and this is just a rare combo. It made sense though as we were very similar in many respects. Then yesterday I got a note from Maurice whose friend had had dinner with Rita and heard about me and told him. Small world eh? 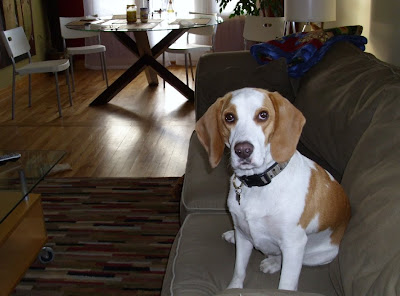 We can't let a post go by without a picture of our favorite pooch, can we? Couldn't figure out what was interesting him so much. Maybe it was anticipation of the pizza yesterday. The boys convinced me to have pizza delivered, a diet busting decision, but after three weeks of being good, I figured what the hell. I had two and a half slices. I only put a tiny bit of mayonnaise on it (a quebecois thing that really does improve the dish) but I didn't put any Cheez Whiz on it like Dan did. I'm sorry but Cheez Whiz is for breakfast. I can't believe I really eat that stuff, but I do and I like it. What's the opposite of a snob? Cause that's what I think I am.

One last thing. Today marks 10 years since I moved to Canada. On this day in 2000 we landed with Sara, two big suitcases of clothes, a box of important papers and a computer. It's hard to believe we now have a furnished house overflowing with things and a garage crammed full of shit. Our net worth has quadrupled since that day, something that never would have happened had we stayed in Socal (I don't think). Thanks universe, thanks Quebec! Here's to another decade in this great country.
Posted by tornwordo at 7:22 AM

Awww, pizza isn't a diet buster. It's a happy reward for hard work. Mayo on it? I'm skeptical, but I'll try it next time, just once.

Congrats on your diet and decade.

Mayo on pizza? Nein. I do dip fries in mayo though (I hear it a Montreal thing, but I've been doing it for eons).

And you've met another INTJ. You're looking at him. Or his comment, anyway.

I am dieting too, and working out a lot. I've got a HS reunion in October!

As bad as mayo is, health-wise, I love it. I don't think it'd be good on pizza though.

You have been in Canada as long as I've been in Atlanta. Pride is coming up, you and Serge ought to make the trip!

I can't imagine anyone NOT getting along with you, poop posts notwithstanding.

Congratulations for the ten years and for being grateful for what you have. So many use anniversaries to bemoan what they don't have. You're a lucky guy and you know it.

Good luck with the dieting...I'll have to think along those lines, after 7 weeks in Europe...now back to school and reality, tomorrow.
Congrats on the 10 years in Canada!
Art

They used to say there were six degrees of separation, but that was before social networking on the internet. The world is getting tiny.

I am always surprised that someone from California would end up living here in Montreal, for some reason. Perhaps it has something to do with the great weather down there, but then again, there's more to life than just weather. Anyhoo, we are very happy to have you here with us. Happy tenth!

I still remember your phone message that you were leaving.

Oh the tears on my end. I know you are happier now, but still, selfishly, I wish you were closer.

And I love Mayo too, but can't imagine it on pizza. Now, ranch dressing? That's another thing entirely.

Mayo and cheez whiz on pizza? Hmm, that is/are new ones!

Congrats on your diet success and anniversary - both impressive feats!

Now, wait, I tell Mason that HE'S the favorite pooch. (Even though I'd probably tell Georgie the same thing...shh, don't tell them....)

Your mention of Glads reminded me of some of my old pics from our former house:

Like Mark mentioned above, with social networking and blogs before that, the whole six degrees of separation thing seems to have been greatly reduced. Some of us know more people than we would otherwise, or at least know of more people.

I love dipping my fries in mayo, but never heard about putting it on pizza. I'm intrigued, although I'm not sure I'm intrigued enough to actually try it.

Ten years already... Wow! I think it's fair to say that your gratitude about being here is matched by our gratitude of having you here. :)

Congrats on your decade! Canada may be the land of opportunity these days, eh?

I shall try the mayo on pizza, just to see if I like it.

I was on a diet for about a year (on and off). I found that adding wheat bran to things was a great filler and assisted in the other end as well. I put it in oatmeal/porridge, as a breading for skinless chicken and everywhere (I even used it in salad dressing). It adds body and a depth of flavor.

congratulations on your decade-iversary! isn't the accumulation of stuff surprising? we've been going through our 20+ years together for the past 2 years, slowly pruning down what we don't need. i even got rid of my wedding bouquet. i figure if i haven't seen it or let along thought of it for over 20 years it's time it found a new home. it is probably the play thing of some happy flower loving child somewhere.

mayo on pizza does sound odd. sour cream, on the other hand, is awesome on pizza. cheez whiz sounds atrocious though. that's like adding salt to a salt lick.

Wouldn't the opposite of a snob be a whore? You're a cheeze whiz whore...hahah! Makes sense to me!

I wonder what I am on the Meyers-Briggs test? I should take it.

ISTP - had to do the whole Step II for my current graduate course. Our instructor for the spring workshop, in describing the types, said, "TJs are the ones who rule the world." So I suppose that makes you an oligarch.

my ex was an INTJ; I am an ESFP (extra special friendly person, or so my friends tell me...)

Glads are my favorite flower. That is a beautiful arrangement.

Congrats on your five pounds. I recently lost 15 pounds through starting to run on the treadmill (something I swore i would NEVER do) and watching portion sizes. I actually sort of like that feeling of fighting that urge to eat a bag of potato chips or a chocolate bar (or two).

The idea of mayo on pizza kinds makes me gag. Just sayin'...

Here in the land of great pizza, putting mayo or Cheez Whiz on pizza is probably grounds for involuntary committal to an institution. In fact, NOBODY here will admit to eating Cheez Whiz. Maybe because Wisconsin is just a short drive away...

The opposite of a snob usually lives in a trailer park, and often responds to such names as Bubba, Skeeter, or Lurlene.

This INFP cannot grasp the concept of mayo on pizza.

You're right about the cravings easing up with time. It takes me about 3 weeks to get over the sugar cravings but I'm there now and loving the freedom from the candy racks near the cashier in the grocery store.

Wow, maybe your blog self-selects for INTJ masterminds (altho I sometimes stray into INTP architect when the spirit moves me), I haven't found these archetypes to be useful in my like, EVER, but I hope the rest of you have.

Are you getting plenty of fluids (preferably water) in your new diet? If so, consider adding a bulk laxative like Metamucial or Benefiber.

congrats on the anniversary and the weight. a tip for the glads, if you pinch the tops off, bend them like you would fresh asparagus until they snap, the few at the top will come off, but it will be easier for the water to get to the top and they'll bloom all the way to the top