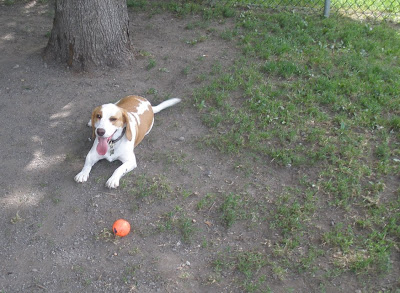 It takes a lot to get him to this point. A good hour of running around and playing "chase me" with the ball he found in the park. We've been going every day because for the next six weeks I'm going to be balls to the wall busy with work. I make about a fourth of my annual income in this late Sept to beginning of Nov window so he'll just have to understand. I had a terrible dream last night that he had escaped and when I found him at the dog pound, they had already agreed to sell him to someone else since they only hold the dogs for 48 hours. (not true IRL) Then I had to say goodbye to him as the new owner was there picking him up and calling him "Snoopy". When I woke up, I was relieved to find him snuggled up against me in bed. I rarely have nightmares, but I think that qualifies.

We've been watching a lot of movies lately as well. Mostly art house flicks and lesser known titles. Much of the time we understand why the movie didn't become a blockbuster - there are a lot of lame flicks made, especially in the "gay" title section. But one movie really did it to me. Serge refused to watch it because he doens't watch "dog" movies. It was called Kachi. Have you seen it? I cried more than in Marley and Me but not it the same way. In M&M it was a sad, sad cry, while in Kachi, it was a cry of love for the loyalty of that dog. I really loved the film and that it was a true story made it even better.

We've had our computers for five years now and Serge ordered a new one for himself which he has been busy squaring away. Once he's done with that, I'll inherit his (it has more memory and a bigger hard drive) and mine will go to MIL I believe. One thing we discovered with the printer is that for five years every time we have a print job a window will pop up on my computer asking for a confirmation of the print job. It doesn't matter from which machine the print job is submitted, you still have to accept on my machine. Well, after five years we finally noticed the little box to check "do not show this window again". Five years of lamity people, it's got to be a record.

The last little tidbit I've got to share with you is something I learned this week. Your brain knows if you have real sugar in your mouth or fake sugar. When you are chewing something in your mouth, your brain is already giving instructions to the body based on what you're tasting. Regardless of whether or not you actually swallow, balls have already been gotten rolling in the body. For example, they had runners gargle with sugar water and sugar substitute water and then spit it out. The real sugar runners performed better because the brain anticipated the new energy source being ingested. So the brain knows even though, and especially with the new kinds of sugar substitutes, we can't tell with our conscious brain that it's not real sugar. Cool huh?
Posted by tornwordo at 7:13 AM

Oh the lame things I do on my computer out of sheer laziness. Every time I start up my mac it wants me to register my printer to the HP site. Been declining that now for 6 months.

I would be sad too if someone took our Hugo away from us. Nightmare of the worst kind.

The Georgie/Snoopy dream DOES qualify as a nightmare!!!

I cannot watch dog-centric movies. I don't care to see animals in danger, potential of danger or with death. Dog movies rarely end well for the dog - and when they do, it turns out usually to be cheesy. ...and I still had to sit through the potential danger.

I know have to leave work and go spend the day with Clyde.

What a neat fact about the sugar. My body never has to worry about the fake stuff. I give it lots of the real thing.

Could it be that you're suffering from a form of separation anxiety about leaving Georgie at home during the day?

I've heard of Kachi but still haven't been brave enough to see it.
I dreamed I stepped out into the yard and it was heaped with junk and garbage. Too many Hoarders episodes lately.
The sugar thing is right. That's why so many people who drink diet soda are fat.

Scary dream alright!
Will check out that movie too. See you in November! lol

The sugar substitute thing is interesting. I always have a post-lunch drowsiness period. I wonder if I gargled with some sugar water with my lunch whether that would cure the drowsies.

That's cool about the sugar. Apparently, a similar thing happens with fear: your body senses a dangerous situation and has already dispatched a fear-response biochemical cascade in your body before the brain is even "aware" that it should be frightened. You feel before you know.

Posts like these are why I keep coming back here. :-)

Do you mean Hachi? The french film about a professor and his dog? It looks of high interest.

I recommend Quill, even for those who don't like dog movies since it chronicles the birth, training and life of a seeing eye dog. Japan, who is very up on blind and raises money for seeing eye dog homes as each is only trained for one person. It did win several awards.

yeah- i think you mean hachi-
it was a true story about a dog and owner in japan- if you go to shibuya station today theres a statue of a dog there. used to pass by every day on the way to school/work while i was abroad.

Our son told us this past week that he took his new dog (who looks very much like Georgie with dark coloring) to a dog park. As he was leaving and was in the "intermediate zone" some clueless elderly woman opened the outer gate and let his dog escape. Luckily some other folks nearby helped my son catch his dog. (The woman, btw, did nothing to help.)

I am selfishly redirecting you and Georgie to my blog today, because my friend Brian needs your support about adopting a puppy that needs a loving home. Please visit and leave your comments of support for him at: http://www.madtexter.com/2010/09/pause-for-paws.html

I am selfishly redirecting you and Georgie to my blog today, because my friend Brian needs your support about adopting a puppy that needs a loving home. Please visit and leave your comments of support for him at: http://www.madtexter.com/2010/09/pause-for-paws.html

I hate scary dreams like that. I'll stay away from the other movie because M&M just about did me in, I can't take that stuff.

I have nightmares too..my legs twitch and I whimper. My dads comfort me and I wake up.