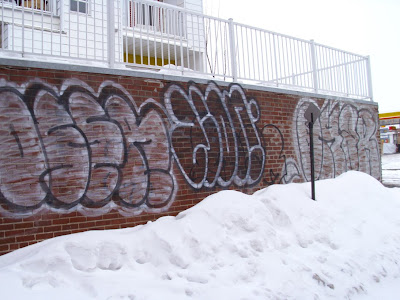 So we haven't addressed the graffiti problem because it's so cold and inclement all the time so someone came along and added a tag to the wall. This must have infuriated the original taggers because then they came back and essentially filled the wall in with their logo. Is it wrong to fantasize about catching them in the act and dowsing them with gasoline and tossing a lit match onto them? I think it is wrong, but fantasizing harms no one. Sometimes I really loathe my species.

There's a groupon deal up here for a half price hot air balloon excursion. Serge wants me to book it but there are so many other expenses coming up. Not to mention the thousand dollar electricity bill we just received. It's for two months and covers the two units downstairs as well as our unit but it's the priciest bill we've had to date. Been cold up here. I sure bitch about the price of things a lot, but that's what happens when you're poor all the time. We're only rich on paper, believe me.

That may be changing though. With the new opportunities at the college coming my way, I'm hoping that my work becomes a bit more steady and predictable. Fingers crossed. 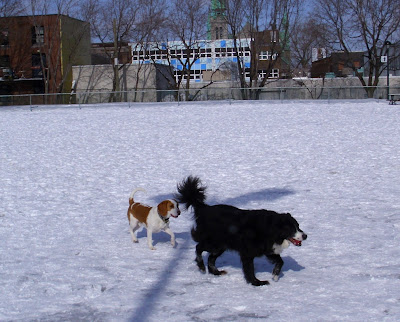 Synchronized walking. This was over at the doggie park yesterday. There was only one other dog when we arrived, I guess people were dissuaded by the cold, despite the bright sun. It was so funny a couple weeks ago. I didn't have my camera then but someone had built a big snow dog next to a snow man. Well by the time I saw them, the snow man had been toppled but the snow dog remained a lone sentinel in the park. The funny part was that the bottom half of it was yellow from the litany of dogs pissing on it. I keep hoping someone will build another so I can get a picture of it.

I need to start writing down my blog ideas. They always come to me when I'm writing implement challenged, like in the shower or while driving. Then poof, the idea evaporates before I get to a pen and paper. The ideas are probably dull anyway, like the rest of today's post. 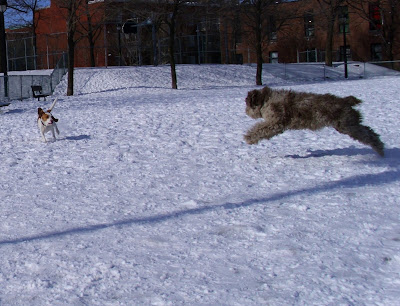 After the black dog left, we were alone for a bit and I tossed snow balls for Georgie. Then this guy arrived. He wasn't interested much in Georgie, but then when I was fixing to go, I displayed the leash and Georgie started running toward me. I wanted to get another pic of him running but then the other dog took notice and decided to try to pounce on him. There's no way I could have gotten this shot by planning, nope, this was all serendipity. And I love it.
Posted by tornwordo at 7:36 AM

Great shot! That dog wanted to play! It's winter here again in Nova Scotia. But guess what? Only 21 days to spring!!!

Ugh, those taggers ought to be shot. Have you thought about putting a camera out there to catch them?

Synchronized walked - ha. It almost looks as though Georgie is going in for a butt sniff too.

That last dog in the park looks huge.

That is a great shot - of both dogs actually. I'm beginning to think that blogging daily is diluting what little I have to say in the first place. I envy your style.

I love the Georgie pictures and I kind of like the art work on your wall also. But I can see why you would not want it there. Too bad it can't be auctioned in a pricey art store. You might get enough to pay that big bill.

You do know that wireless web cams with motion sensing are getting cheaper and cheaper. Hook it up to a computer and let it record. Turn video over to police, problem solved.

Have I told you to watch Exit Through the Gift Shop? It's darned amusing. If Jay likes your tags I think he should watch it too. I really love it. Caya and Noah do too.

Will the cops fo anything if you get footage? Also, go for the balloon. We only live once!

I don’t think it’s wrong to fantasize about setting the taggers on fire. I would take it a step further by tying them up and spraying them with paint before setting them on fire. I hate taggers.

I know that the one and only time we had tagging in our neighborhood, the police were there that very day demanding that it be removed...."required to be removed within 24 hours" in order to not incite additional gangs to return to tagging. Maybe if it snows more, it'll just cover it up.

Since it is still winter, why not fantasize about pouring a large bucket of icy water on the taggers? Preferably water with an unremovable dye or something evil-smelling in it. . . .

Seriously, security cameras and motion-activated floodlights might be a wise investment.

Love the Georgie action photos . . .but it sounds like you're getting a little bored. A hot-air balloon ride could be just the cure!

"I need to start writing down my blog ideas. They always come to me when I'm writing implement challenged, like in the shower or while driving. Then poof, the idea evaporates before I get to a pen and paper." Understatement of the year.

I believe the balloon above Georgie's head should read Holy crap!

In theory, I think graffiti can be an important political tool. Still, I don't like looking at it.

I have not had a blog idea in such a very long time.

That IS an amazing show.

So, if you can't beat them...what about leaving out some cans of spray paint in a better range of colors?