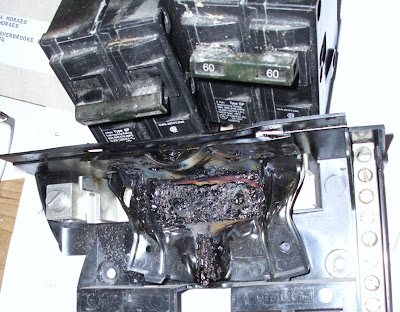 We can play ink blobs. What do you see in the lower center portion of the photo?

This is a fried box that once housed those two double breakers there. In case you missed it on FB, Sunday evening just as the Superbowl got going, the tenant from downstairs came up and said his electricity was out. We called for an emergency electrician, actually we called several and they all quoted similar amounts, basically $325 plus parts for an after hours call. Anyway, this box leads to another box with a breaker and that breaker was loose and replacing it seemed to fix the problem. Unfortunately, that breaker (a double hundred amp) was a sign of the trouble in the other. This we found out this morning when the tenant came up again with the news of another outage. After all is said and done, we're out $900. That's a week in Cuba dangit!

I was trying to remember if we had any electrical woes before and so I searched the blog. I ended up getting sucked in reading Feb 06 and saw how different my writing style was. How much better it was. That's because I was trying harder. At that time, I blogged every day religiously. Of course Sara was alive then and I got to cryin over her in one of the posts. Serge mocked me. "You have a dog!" he said in that stop-that kind of way.

Did you ever say "adoy" when someone did something stupid? I did. And after that came duh and doy. I still say duh to this day. You?

Last night Georgie went outside and was all hyper prancing around in the snow. I started throwing snowballs and he was crazily diving in and digging, frantically looking for the ball. Then he started doing this thing he does where he runs up to you and you try to grab him and he fake growls and darts back, then repeat until the hyperactive impulse reaches a zenith and he goes tearing off uncontrollably around the patio. The whole thing was so cute that I ran out there in my socks and bathrobe and played with him stomping around in the two feet of snow. It made me feel kid-like. I'm smiling as I type. Here's another time during the day of him chasing snowballs.

Posted by tornwordo at 4:51 PM

I'm telling you, electricity scares the hell out of me! Yikes.
He really made fun of you for crying? Oh boy. Looking back at prior year's posts can really remind us of where we came from....and how far we've come, or need to go.

Honestly, when I mentally tally all the home repairs, upgrades and BS, I find I'd be further ahead financially had I rented.

I have to learn everything the hard way.

Well, I am glad you are all right and you didn't have a fire. And Georgie is still the cutest dog on the internets (Except for Bailey and Miles of course) Such fun to see him play. Thanks.

Electrial stuff scares the shit out of me. But on the bright side (if there can be one), that fried breaker indicates that it did what it was supposed to do, no? It's the fact it's costing you a mint that's annoying.

I can get lost for hours if I go back and read some of my old blog entries. There are over 1,200 entries in there dating back December 2002, so it's easy to get lost. Sometimes I wince when I read some of the old stuff; other times, I think to myself, "Hey! That was really well written." And it's fun being brought right back to the mindset I was in when I wrote a particular entry, although there are some entries for which I draw a blank and would never have remembered it had I not written it.

You are lucky that didn't start a fire!

Even more fun is when the dog catches the snowball. If Georgie ever does that, the look on his face will be priceless!

As for Serge...maybe it'd help if he thought of it this way: Dogs are individuals, just like people. Each is different and unique. If something happened to you (Gods forbid!), Serge might someday find another husband. But that man could never take your place in Serge's heart. Same with the dogs. Georgie can't take Sara's place in your heart. Besides, he's got his own spot there already.

Ouch for that breaker bill but at least it did what it was supposed to do, i.e., prevent an electrical fire.

I wish I was around reading your blog in real time in 2006. I only started reading circa 2008 and it's true that your writing style has changed a bit but your personality always comes through, which is a good thing. Reading you so often brings a smile to my face :)

Good thing you took care of that breaker, even if you are out $900, it could have been a lot worse.

Georgie with the snowball is too cute.

Anon is dead on, Serge should not be making fun of you crying and missing Sara.

Oh, and I play with Hugo much in the same way, the darting...makes me feel like a kid too. I love that my doggie likes to play!

I still tear-up over Tovah being gone. Georgie is way cute w/the snow.

I know nothing about electrical boxes.....that's why I married someone who does.

You guys need to make friends with an electrician, a plumber and a mechanic. Seriously. It will save you big bucks! LOL!

I still say Duh. And Der. And Doi. It's like I'm stunted.

I read my old stuff too and am immediately transported back in time. It's why I can't give up the blogging.

The electricity in my rental house scares the crap out of me. I'm no expert, but it looks like it has been cobbled together since 1939. Glad I don't own. Sorry that you had to pay for all of that.

I get caught in old posts, too. But it's like I'm reading someone else's life sometimes so I don't allow myself to do it much anymore.

Like Rox, I say Duh and Der all the time too. Must be our simimlar ages.

Georgie is adorable in the snow. But all those snowballs are just gonna make him have to go outside more so it's a cute/vicious cycle. But from a reader's side, mostly cute :)

My erratic posting helps my more-erratic memory. Going back brings it all back. I wish I'd started sooner.

Georgie is just the cutest thing ever. He is so lucky to have found you, because your love for him (like Sara) is so apparent.

I need to play. Georgie has the right attitude. Run...just because.

I love the fried man sculpture.

I am always afraid if I screw around with electricity I will be electrocuted...not a fun thought.