Well it's our turn to get pummeled by snow. I knew it when I looked at that scary satellite picture this morning. They were calling for 2-4 inches but I wasn't buying it. I took public transportation to work because I didn't want to risk having to drive home after a foot of snow fell. So glad I did that because a big dump of snow is what we got. Can't complain though, we usually have far more big snow dump events. I might have actually braved the storm this morning if I had had the van. I feel safer in the van for some reason. 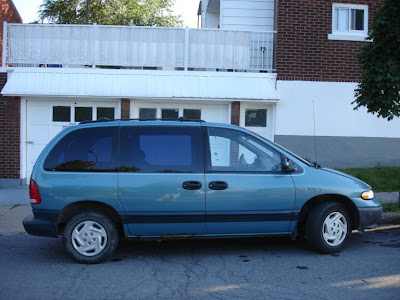 Trouble is, the van was stolen Monday night. I didn't even notice it until I got home from work Tuesday afternoon. I noticed the van wasn't parked there so I figured Serge had gone out someplace. I entered the code to unlock the front door but it wasn't locked. "Uh, hello?" I asked and Serge replied, "Hello," from his office chair. "Where did you put the van? Did you put it in the garage?" I asked. Serge said that it was parked on the corner. "Uh, no it isn't," I replied. After running through all the possibilities including contacting the city to see if it had been towed for some reason, the only possible explanation became theft. So the police came and made a report and basically told us not to hold our breath. At first I felt like I was punched in the stomach but after a couple stiff drinks, we started enumerating the upside. No maintenance costs, no digging it out of the snow, no repairs. And it really was a beater, we had already decided we wouldn't make any major repairs on it and the transmission was doing that telltale clunk when it shifted so I don't think it had that much life left. 1996 is pretty old for a car up here and 230,000km is pretty high mileage too. Farewell to the van. 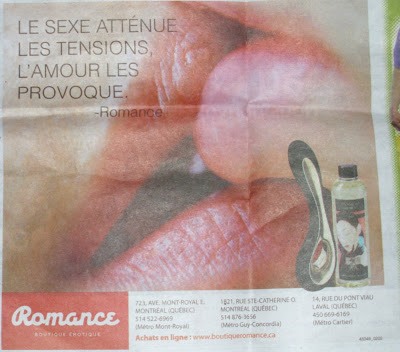 Finally today, I have this ad I took out of the paper this morning. It's for your basic sex shop but I just couldn't (and still can't) figure out what the thing next to the lube bottle is. Any ideas? It kind of looks like a spoon with a hole in it. You can click on it to enlarge. Wednesday down, two days til the weekend. See you then!
Posted by tornwordo at 4:46 PM

Sorry about the van. And I'm afraid I'm no help regarding the ad. WTF?

Sorry about the van.

We didn't get nearly the dump we were expecting, but in anticipation I spent Tuesday night with good friends who live closer to my work and whom I don't see nearly often enough. They're in the process of planning a move up your way this spring or summer, though looking for properties a bit outside the city.

Can you go onto their website and find it?

Looks like th top of a roosters head!!! Not a very tantalizing ad.
Bye bye van...

I know that sinking feeling you get when you realize your vehicle's been stolen. I've felt it twice. We got most of one car back (switched wheels and empty trunk and dash) and never saw the other again. I'd had it six months.

Sorry to hear about the theft but I applaud your ability to find the bright side so quickly. I hope the transmission fell out for the theives the very next day.

Sorry about the van.

Sorry about the van, but I never pictured the two of you riding around in a mommy-van. Then again, it did have dark, tinted windows in back...not that you two innocents would be DOING anything back there ;-) !

BTW, we got 20.something inches here in the Big Windy. How much did you get?

Who steals a 15 year old van? If I was going to risk grand theft auto I would steal a 2011 Cadillac CTS coupe. Are you sure it's not in the impound lot? Ted

Too bad about the van... Or yay(?). I got kinda mixed messages about it in this post.

As for the object, I don't know its purpose, I a bet it is bluetooth enabled.

I agree with Patricia! Hopefully the bastards got five miles away from nowhere and the tranny fell out. Losers.

So sorry to hear about the van... Hopefully they're stuck in some snowdrift somewhere.