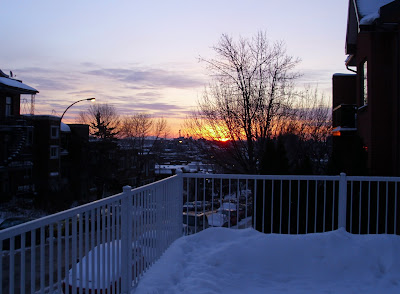 We haven't had a sunrise around the blog for awhile. The sun, after having risen for months behind the building on the right is now marching steadily to the left so we have sunrise season for a while. Eventually it will rise from behind the building on the left. Before I moved up here, I never really noticed how much the sun's trajectory changed. It's not quite as pronounced in Southern California. The longer days make my heart swell. I imagine it does the same to you. 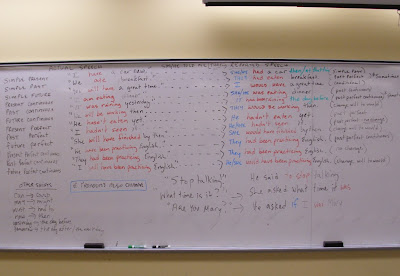 Today I wrote all that on the board. I may just copy it and distribute it next time. My arms hurt after doing that. Still, it's probably the most strenuous part of my job. I almost brought Georgie to class for the day. There was a dog all last week at the physical therapy place next door so I figure it wouldn't be a problem. Unfortunately, I had allergic students or rather students with allergies to dogs so that nixed that. Don't understand that gobbledygook on the board? It's all about how when we report what someone has said, we change the verb tense. "I'm having a party this weekend." becomes He said he was having a party that weekend. You automatically do this without thinking but in a second language you have to pay attention to the time shifts. 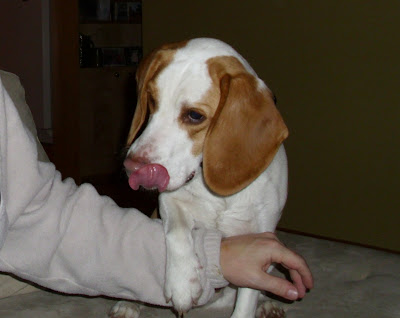 We can't have a post without a Georgie pic now can we? He sure does have a lengthy tongue. I wonder what evolutionary advantage this gave them. Did you know a crocodile can't stick out its tongue? True, though truly useless information too. Here's something else I learned today. The US debt is now at 96% of GDP. Canada's debt is now at 41% of GDP. The top corporate tax rate in the US (federal + state) is 40% but is only 25% in Canada. All sorts of interesting comparisons in the article here. See y'all on the weekend or "at" the weekend for you Brits.
Posted by tornwordo at 4:13 PM

Yeah, I think about the subtly and nuance of the English language sometimes. Imagine having to master all those verb conjugations as a second language!

Interesting facts on taxes, too. Some are surprised to learn we have super high corporate tax rates. And yes, our debt is now as big as our aggregate economy.

My handwriting would be illegible before I got halfway through all that!

Georgie is cute, but I feel his frustration. Serge should practice his magician act using something other than the doggy treats!

Gators also have a gular fold that allows them to grab and swallow things underwater without also sucking water down into their respiratory tracts. Makes it harder for veterinarians who do surgery on them to pass an endotracheal tube for anesthesia.

I miss the sun so much by this time of the year that I stand in the window and bask in it whenever it comes out, as it did this past week. Best mood booster ever.

Your handwriting is still pretty good in this age of keyboard tapping. Mine has disintegrated to a level that matches a word verification scrawl (which was flucifel today).

Ah, reminds of my french class days. And yes, you being gay, you ARE Mary

I know that mastery of grammar is a requirement of your job, but I'm always comforted to find other people for whom an exposition such as the one on the board is not total gibberish.

I've been LOVING the extended days! I had to work late one day this week and was pleasantly surprised to notice that there was still some light in the sky even though it was after 5:30.

Trajectory. I'm on my way to google that.

Pretty happy to be Canadian. Except for the constant windchill...haha!

The sun is actually up now when I wake up, it's so welcome! February is the worst month.

I haven't written on the board in a long, long time. Call me lazy, but it so much easier to use the ol' powerpoint. Toss up some key terms, a map or two, and I call it a day.

At least maybe Georgie's long tongue helps swipe away some of the drool before it hits?

That's a lot of white board writing. Type it up and pass it out next time - though when the inspiration strikes I can see the need.

Interesting compares on US vs. Canada.

Yes, I love the sunrise in the morning! Awake now before 7 thanks to the sun.
Yikes, those figures are surprising , but I know nothing about this stuff anyway....still alarming.

Your sunrise pics always remind me of Cooper. Too good to be true, but I miss Cooper still.

I didn't go look at your numbers but I want to say if there is to be "fiscal responsibility" and "austerity" in the US it needs to hit ALL citizens. It certainly hasn't been equally hard on the top wage earners or non wage earners. Tax cuts make the situation worse. /rant