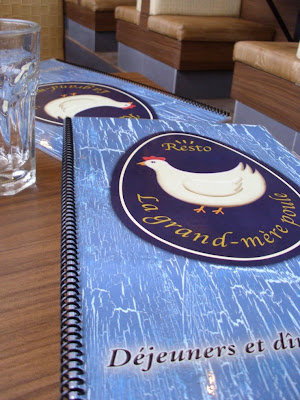 It's such a rarity for us anymore. Going out to breakfast. It used to be such a weekend ritual, but now it seems easier (and faster and cheaper) to just make breakfast at home. I had bought one of those groupon type deals so our $23 breakfast only cost 12 bucks. And I got to have chili and cheese with my eggs. That may come to haunt me this morning. 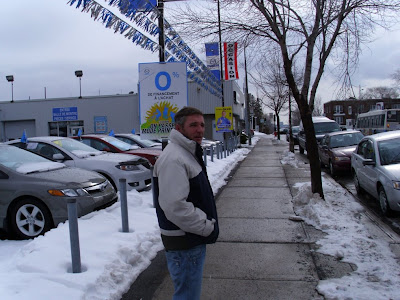 When we got back from the restaurant, we had to park a couple blocks away because they were doing snow removal operations next to our place (the building on the right in the background). About half of the snow melted with the rains we got on Thursday and Friday. I am so done with it as you know but it's snowing again outside my window as I type. 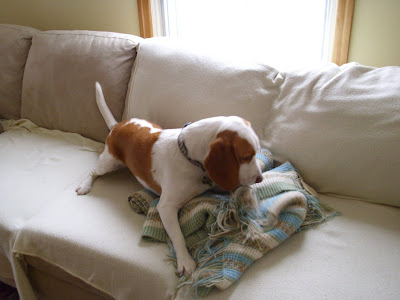 Georgie was all frisky when we got back, darting this way and that and attacking the blanket. Serge said, "Hey be careful with your grandma's blanket!" But I like USING the blanket, after all that's what it was made for right? Georgie just play bites anyway. 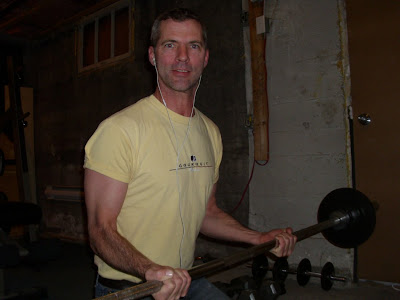 It was Saturday, so it was workout day. I guess I'm curling 70 pounds if LBB is right and the olympic bar is 45 pounds. No longer is it about body building though, now it's all about maintaining. After all, I'm arguably middle aged now. 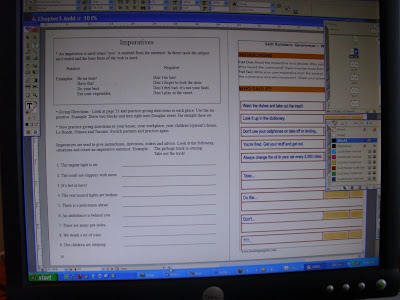 The rest of the day was devoted to the project. Creating the ESL course for truckers. Some of it I create, and some of it I pinch from the internet or grammar books. (with citations naturally) The process is long, somewhat tedious, but also fun for the creative bits. Serge helped me a lot with cleaning up images, screen shots and scans. I'm going to have to compensate him for that. 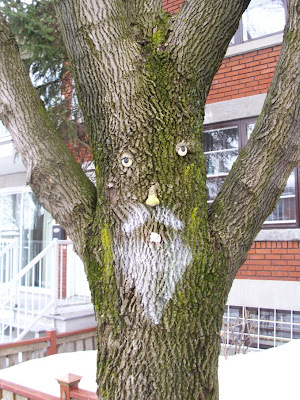 On Georgie's afternoon stroll, we passed by this tree. I had never noticed that someone had adorned it with facial attributes. This is pretty much how I see all trees though. As living sentient beings, the only difference is that they aren't ambulatory. Funny though that I only noticed when I was looking for something to photograph. 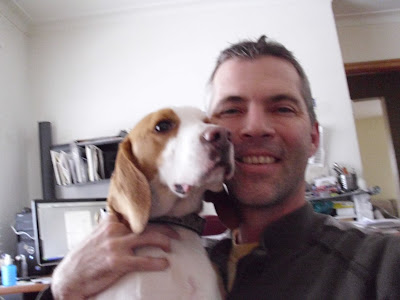 Back to work at the computer and Georgie wanted to hang out on my lap. I let him for a little while but then my lap hurt so he had to get down. He's such a sweetheart, except when he consumes turds. 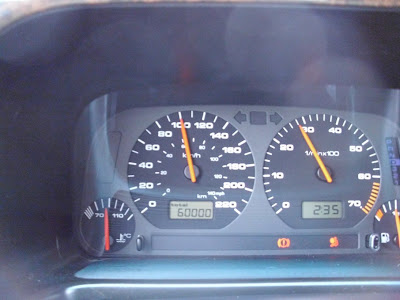 The market flyer showed a special on filet mignon. Half price. So Serge ran over to stock up and noticed the odometer. 60000 kilometers (about 37000 miles). Even though it's a 99 model, it's still in great shape. 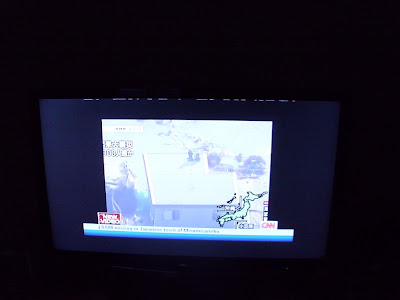 Of course all day we had the news on in the background. I keep thinking about the missing trains and what I imagine was the ocean's tongue lapping them into the sea. The horror. 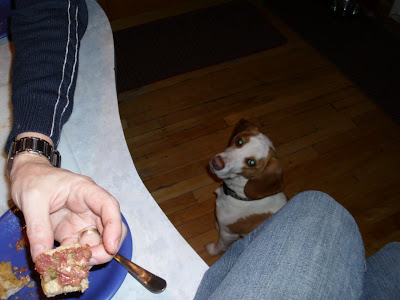 Dan came over and we made an impromptu supper of steak tartare. So delicious with fresh filet mignon. Georgie was quite interested too. I let him lick the serving scooper I used. 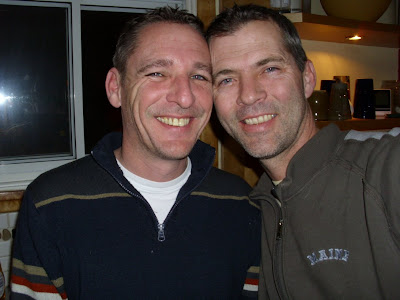 Post martini picture time. It's rare I get a genuine smile out of Serge. We are looking our years though, sigh. Nothing to do but embrace it I suppose. 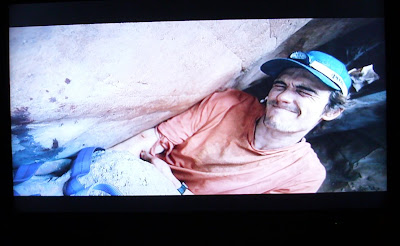 To finish the evening, we rented a movie. You can probably guess what it was from the picture. Surely I'm breaking numerous laws by posting the picture, but whatever. It was actually a really good film. I think they really captured the headspace of the person who lived this horrific event. I highly recommend it.

That's it for March's 12 of 12. To see what others have chronicled on the 12th of March, you can visit this link.

Sorry I didn't pop in midweek. The work is never ending and some days I don't even get to the computer. I'm so drained when I get home I just plop down on the sofa for a couple hours before bed. Wash, rinse and repeat. Maybe I'll get it together better this week.
Posted by tornwordo at 8:09 AM

I love that you have Ent in your 'hood.

You boys are looking grrrreat! (As Tony the Tiger would say...)

Your snow situation looks better than ours right now. I fear spring will never actually come. Ok, fear might be a strong word. I DREAD one more day of winter. Yeah, that sums it up.

There's nothing wrong with 'looking your years'. You guys look great. It's the folks who try to hide their age who are pathetic.

The weather is playing with us here in Nova Scotia.....today was like spring.....in the garden actually!
Cute shots of Georgie and of course you two!!!
Jim

hun-nee, we are all "looking our years"; some of us just do it better than others (like you and serge). embrace it, love it, celebrate it!

Embrace "it" and embrace each other. I hope you will discover as I did that it gets better, deeper and richer as you go through the years.

Chili and cheese with eggs sounds worth whatever trouble it could bring later.

What a great pic of you two. I think you guys look fantastic!

Great post. Nice insight into your day. Reminds me to do a similar post one of these days (I always say that). You're looking good for middle-aged!

I want to see the movie. I saw a special where (my) Tom Brokaw went back with the man and they went down to where the guy had been trapped. It was intense to see the man go up to the blood-stained rock and realize what he'd endured.

Oh my! Your biceps are gorgeous. As is the rest of you. What the hell, you're aging well. And Georgie and Serge are lovely too.

Welcome to the regular working world. Somehow, the time change has made it easier to get things done after work.

Ain't gonna lie... that be one cute pooch you guys got there!

Love the Georgie photos as always, that's a great one of you and him :D And what a lovely photo of you and Serge, smiling. You don't "look your years" to me, and I'm sure many others who read this would agree. Oh - nearly forgot, I loved the tree photo too!

Sorry I’m so late commenting – not sure where the time went! My own 12 was up late, but close to the 12th. The comments are way late though!