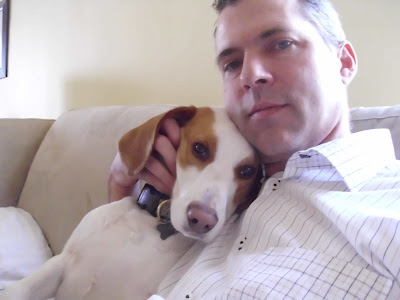 About the only pictures I'm going to get are ones around the house like this. That is until I buy a new camera. It's so irritating though. The camera is fine, it's just the on/off button that doesn't seem to want to work. I want to try everything before tossing it into the garbage. Incidentally, I took this picture with my left hand. Actually I took many, but Georgie is actually looking at the camera in this one. So cute.

Spring is trying to work it's way into our climate but old man winter is blocking the door. They're calling for more snow for the weekend. I won't have to shovel though. That's because I'll be out at a five star hotel with my English immersion group. Even though it's quasi-working, I'm really looking forward to getting away, dining sumptuously and having fun with my students. 18 out of 22 are my students anyway, so it should be a ball.

I don't think there's going to be internet, so I'm sensing a bit of a hiatus around here. Maybe it's time to close up shop too. This is closing in on 6 years and I feel like I just say the same thing over and over. On the other hand, I love the fact that it's here and I use it all the time to research when something happened. For instance, how long I've had the camera, or how long since we bought the tv and video recorder. When I want to know such things, the search box on the blog works great. Unless I land on a picture of Sara and then I get all blubbery. I love Georgie, but nothing can replace the bond I had with Sara. So special. Anyway, I'll try to pop back in next week sometime. Don't worry, you're not missing anything, I'm just a workin. Have a great week!
Posted by tornwordo at 6:32 AM

I'm not ready for you close down shop. But I totally get it if you do. I would miss you and Serge. I'd totally miss Georgie.

That is such a great pic of the two of you.

Sounds more like you need either more entertaining students or a little vacation.

Great pic of you and Georgie. Hope the new phone takes even better pictures.

I'd miss you! If you close this down, you'd have to post more on FB, k?

I don't know. I want you to stay. The fact that you are together and let us into your lives is a very positive thing. Besides I love Georgie also.

Don't do it! Close down shop, that is. Once in a while rather than no more is better. It's with that notion in mind that I don't plan on closing my blog soon even though my postings have become infrequent and possibly more boring than years ago.

I'm the exact same way with mine. I feel it's so dull and boring every time I post, but I love it for the diary of it all. (The diarrhea of it all?)

I love the buttons on that shirt! It's a great picture of the two of you!

The picture is hot! Hawt! And there's no way I'm letting you close down. Revamp. Rework. Rethink. Redo. Relax. But don't close down.

Why doesn't anybody ever send my students and me to a five star resort? Or, if that is too much, they could just send me.

Torn, I know how you feel but your legion of loyal fans would be lost. Sure some of us don't comment every day (I'm bad, I know) but I for one love dropping by and knowing you'll share some random fact or adorable pic of Georgie and/or the hubby...or talk about poop.

Plus, who else gives us a peek at a loving gay couple and their pooch's daily life? You gotta stay...

the spring situation is exactly the same over here. just when i thought it was getting warmer, we had a day with snow, snow snow. enough already!

Aw, jeez. Don't close it down all together. Even occasional posts are nice :)

Oooh, I know where you're going! the place is great and i DOES have internet. The food is to die for, enjoy!

You and Georgie look great. That's a wonderful picture of the two of you.

Your love for Georgie in no way diminishes your love for Sara. But I guess you know that. Just thought I should mention it, since I know it can feel like a betrayal of the one we lost to love another fully. I also realize how hard it is to lose a special loved one, whether human or canine. I live in a sort of denial about such losses in my life. They're always there; in fact, it takes relatively little to find the pain below my surface. Things can push my emotional buttons that would have bounced off me in the past--human losses took me to this point, but they all hurt.

By the way, you may be able to get that on/off button fixed, rather than have to spring for a whole new camera.

You say not to worry then say you might close down. I am not on the face of books or what ever you youngins are into. My only contact with "my" people is here on the blogs. If I click on Sticky Crows and get the message: Blog Not Found!It will leave an empty place on my screen and an empty hole in my heart. Hugs, Ted

I also don't post comments very often, but I love reading your blog. I love your interesting take on living as an American in Canada. Plus I love your Georgie pics, your food pics and you're just, plain funny!

don't stop just slow down like middle aged people do!
i always think i will not love a dog like my last one...but Sonny and Cha Cha burrowed their way into my heart, so did Nathan actually.
xxd