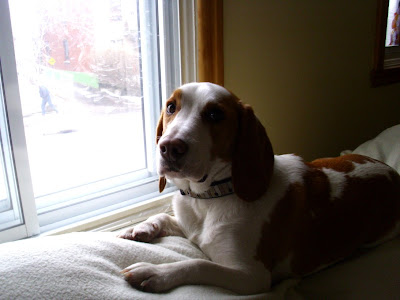 But this one was already in the can. His favorite perch atop the sofa back. Once in a while he "talks" to passersby. Usually big fluffy dogs will get him to howl too. Luckily there are few of them in our neighborhood. I went to get a picture of this howling, it's so funny how he tilts his head back to do it, and the camera wouldn't turn on. I changed the batteries and still it wouldn't turn on. A quick search on the internet and I find that it's a common issue with my camera, the on-off button is fickle and sometimes won't respond. A quick check on the warranty, and yep, it expired a few months ago. I'm not sure when I'll be reequipped for photography. Even Serge's camera, handed down to him from my mother, isn't working either.

Is Mercury retrograde or something because our digital recorder for the tv also stopped working. The cable company is coming out today (sometime between 7:30am and 8:00pm, don't you just love monopolies?) to look at it. That box was awfully expensive and if it's broken I figured out we have paid $33 a month just to have the friggin box! Talk about thievery.

Then yesterday morning when I went out to go to teach, I put the key into the lock, turned it to unlock the door and then the key refused to budge. The car was unlocked but I couldn't get the key out of the lock. I tried to remain calm, but I was panicking since it was my first lecture at the college. After a few minutes of dicking around with it, I got it out. We replaced the batteries on the automatic unlocker thingy, so I'm going to avoid putting the key in the door lock from now on.

The lecture went well, but it was hairy for me. The smart board was smarter than I and for a while I switched that off and went over to the good old stand by, chalk and chalkboard. I just love (sarcastic love) looking lame in front of students. Other that that it was fine. At one point, I didn't know the answer to a question, so I made it a teaching moment, "How do you find an answer to a question you're not sure of?" Wikipedia helped us out. It was cool at the end seeing them brainstorming possible topics. It was at that point I knew I had done alright as they were engaged and energized. Whew.
Posted by tornwordo at 8:40 AM

Sounds like you had the kind of day that requires a Martini at the end of it. I hope you indulged!

Fix the camera or get a new one.

You know I love Georgie pics.

Man, I'd love to sit in on a class of yours.

My English could use a little tuning up.

Yes, you must get another camera! We need our Georgie fix too you know!
Congrats on your first day!

Tell me about it. All of those tech toys don't seem to last very long before breaking down, for some reason.

Good for you turning the moment around in the classroom. Hope you are able to track down a decent deal on a new camera soon - not only for all the howling, but it'll be tulip season there before you know it!!

it's the law of electronics, they break in 3's.

Georgie is so friggin cute, I can't stand it.

have a good weekend

Hey friend! I'm blogging again. So I will start following you again. I'm so glad you are still here. I hope the Canadian weather is at least consistent. I will catch up.

We have a smartboard in my kindergarten class and it is also smarter than I.

Georgie is looking quite content there on his perch. Great pic.

Sounds as if you had a good day. Don't you just love electronics?

Nothing worse than dealing with the 1st day of anything but to have your car deal you a smacker just ain't fair. The DVR system we use allows us to just replace the recorder free of charge...of course nothing is free but when the guy came in and said...that's a common problem, I'll just install a new recorder...yeah for the $15 a month. Georgie I'm waiting for your own blog...you know it can be done!
wink wink!