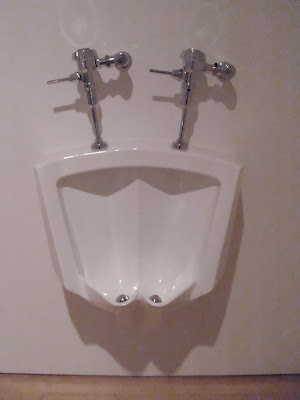 This is the kind of thing that passes for art these days. At least that's what I think considering it was in the Museum of Modern Art.  Of course Serge and I immediately wanted one for our bathroom. We had one when we lived in the loft and really liked it. Girls are turned off by them though we learned while living there.

Here is another piece of "art". We thought it looked like a chair that had been sat in by someone with dynamitized farts. Serge posed with that in mind. We spent a couple hours there and then we went over to meet the parents at their hotel. Mom joined us for a walk after lunch and we went down to City Hall, near our hotel. 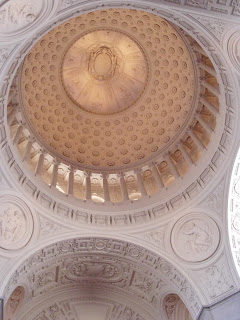 We walked around inside and oohed and aahed at the ornateness of it all. It's bigger than the capital building in Washington DC. After that we cooled our heels a bit and met for dinner later at a wonderful place called RN 74. The folks treated us to a fabulous dinner with some very nice wines from Burgundy. When inquiring about the wines on the list, the server said, "Hang on, I'll get the som for you." First time I've heard that one. Som, short for sommelier. 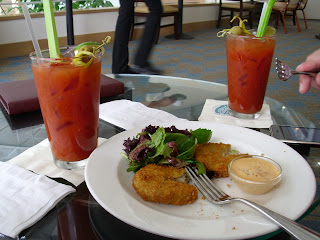 Yesterday, we used the last ticket in our Citypass book for the Academy of Sciences. This is a place with a planetarium, aquarium and natural history museum. It was crawling with children who pushed and shoved. Doting grandparents would never reprimand such behaviour from their little angels. The exhibits were interesting, but enjoyment was reduced by the rug rats. After that, we took the bus out to the Sutro baths ruins and had a bite and a bloody mary at the Cliff house. Nom. 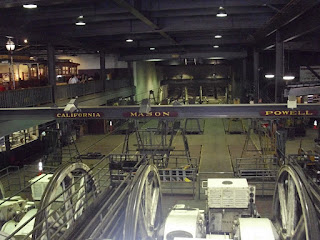 Then we took a ride over to the cable car museum and rode the cable cars as well. Three times this trip. It's free with the citypass so that was cool. There you see the engine room where all the cables from all the lines come through. It is really interesting technology, especially for the late 1800's when it was developed. It functions much as it did back then. 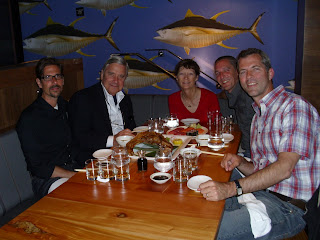 And then we met up again for a final dinner at Hecho, a japanese mexican fusion place from what I can gather and we enjoyed delicious sushi and that big thing in the middle there was a tuna collar. Yum.  We didn't get out to Fort Point or cross the Golden Gate. We didn't see Tales of the City. But all in all, we had a good time and did it up right. Now this morning we're off to Lake Tahoe to spend a week with the other side of the family. 24 people sharing a big house overlooking the lake. I'll pop in if there's internet. Later~
Posted by tornwordo at 12:31 PM

Beautiful stuff! I hope you have a great week in Lake Tahoe!

I'm so glad you're taking the time to post and keep us updated on your trip. I'm wanting to visit SF now!

Shouldn't the entry have been titled TTFN San Francisco?

Lake Tahoe is only 60 miles (east) from my location in The Woods. So you will get an idea of the Paradise that I wake up to every morning. Enjoy!

I always wondered why a home urinal never took off. They do use a fraction of the water...

Yay for a good trip!

I wonder how many little kids and/or persons on illegal pharmaceuticals have tried to use that urinal!

Glad you liked The Cliff House! Have fun in Tahoe.

Believe it or not, I've seen that double urinal before. I think it was blogged about it NYC. So either the artist is making more than one or it's on tour. A urinal on tour. Heh.

SF is definitely on my short list of cities to see. Everyone says how beautiful it is. Add a road trip down the Pacific Coast Highway—in a convertible, of course—for the perfect vacation.

i would give my left ovary (not that it'll do anyone any good since i'm too old now) for a urinal. my husband is 6'6", our son is 6'4". i hate having to wash the bathroom wall up to nearly my height (5'2") because of the splash back. women who don't like urinals lack foresight.

I just don't get modern art. A urinal and sh#t chair? Okay...to each his own.

You did it up right! The urinal, ew. What makes these stay any cleaner? I just don't see it. It seems like just a larger area to get gross and sprayed upon. Ew, I say again.

I love the cable car museum and the turning station! And now on to Tahoe... have a lovely 2nd half vaycay!