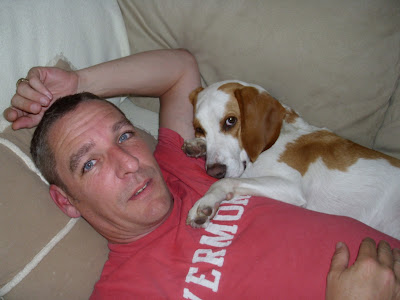 My two boys. I'm gonna miss one of them for the next two weeks because we're taking off for Northern California. Georgie will be staying downstairs with D, a rather long time renter in what is usually a short term studio apartment. He's had some trouble lately coming up with the rent but he's a good guy so win-win. We'll pay him to take care of Georgie and he'll have a little breathing room on the financial side. 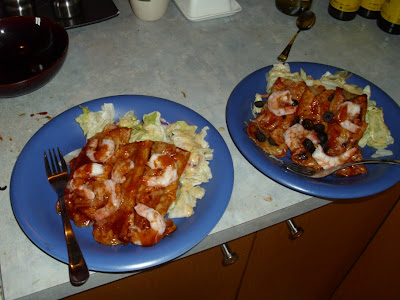 I made shrimp and cheese enchiladas the other day. Did you know cold cheese enchiladas are awesome for breakfast? Who knew? I'm looking forward to having some Mexican food in California, in fact, I predict it will be the first meal I consume there. Boy do we have a long list of activities planned in San Fran. Shows, tours, walks, restaurants, museums, you name it. I'm particularly excited about going to Frances, the first michelin starred restaurant I will ever have eaten at. 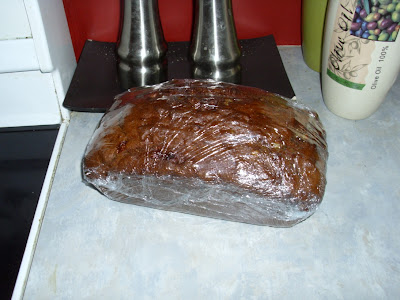 This is Frank's banana nut bread I made. It's still at my house though. See, yesterday Frank invited us to his place for a BBQ. It was the perfect day for it, hot and sunny. I made the bn bread and wrapped it up (still warm) and put it in a bag with our bathing suits, towels and some drinks. Then as we were heading out the door, I remembered that the address was written on a paper in the office. So Serge headed out with the dog and the bag (so I thought) while I looked for that paper. Found it and headed out the door. When I got in the car, Georgie was in the back seat and I didn't see the bag so I assumed he had put it in the trunk so Georgie wouldn't dig around in the bag. Did I ASK if he had put it in the trunk? No. So we get all the way over there and I say, "Can you open the trunk?" and he says, "What for?" Uh-oh. No bag. He thought I had grabbed it (though I obviously didn't when I got in the car, ahem.) Frank had everything for us anyway, save bathing trunks, so a pleasant time was had anyway. Thanks Frank! 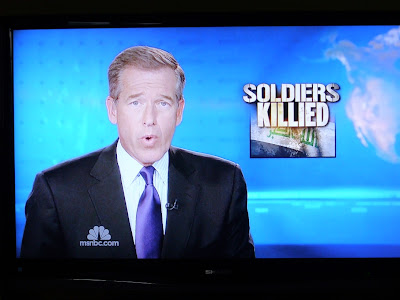 It's rare I catch an error on the national news. I know it's a serious topic, but I laughed out loud anyway. Last night after we went to Frank's BBQ, we headed over to the Jazz Festival, the coolest festival in town. Also prince William and Kate were in town though we didn't see them. It was mobbed downtown (our 15 minute drive over to Frank's took us 50 minutes to come back) but was much easier once we ditched the car and took the subway in. Then we capped off the evening with the fireworks competition display. It was the Czech Republic's night, and it was pretty good, the synchronization was perfect, and we were right up close to the show. Then we walked all the way home sipping from our little bottle of martinis I had prepped. Last stop, ICE CREAM. I don't know, vacation starts tomorrow, but yesterday was the perfect summer day in this city. I loved it!

So I probably won't be on here much for the next couple of weeks. I might try to pop in on Facebook if internet access happens. Later gaters!
Posted by tornwordo at 7:48 AM

I serendipitously saw those fireworks as we were driving into the city from the Eastern Townships where we had spent the day. We were on the south shore side by the river looking towards the city skyline and the glittery exposions right in front of us as we drove by was just magical. What a treat.

Bon voyage and have a great time in San Fran!

Poo, on the rare posts - which means rare Georgie shots.

I like that Geo is staying close to home and not in a kennel. I don't know why, I just do.

Have a good trip.

Why do I feel Georgie is very happy! ;)
Bonne vacances, Georges!

I thought you were already IN SF and I was thinking you were lucky to be missing all the Will and Kate hoopla.

have a great time---safe travels.

I'm sure you'll have a great time on your trip. Just remember to tuck a few presents for Georgie among the cases of California wine you'll be bringing back.

So, if you left the swimming trunks behind, and none were provided, am I guessing right that you went swimming naked? If so, are there photos?

Have a great trip!

Those echiladas look lovely. I miss Mexican food as I used to eat it quite a bit when we lived there. Have a safe trip. And you're right not to put your dog in kennels. Nice blog btw.

Oh man... wish Vegas was on your vacation list this summer! That's two summers in a row we've not gone!

That's the hardest part of traveling: leaving our canine kids behind.

Serge looks great. And so glad you have someone to watch cute Georgie while you guys are gone. Have a great trip!

I have never been to the Jazz Festival. I think that's going on my 'must do' list for next year. It really is a perfect summer day that you described.