What we did this morning 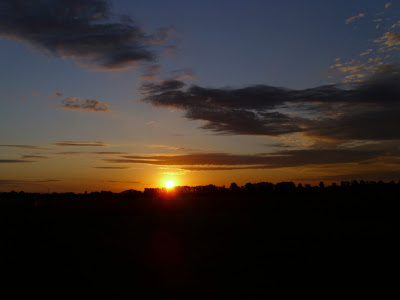 The alarm went off at 3:45. We had to be at the rendezvous point at 5am and it was a 45 minute drive from Montreal. Even though I was super tender and sweet waking Serge, he was a monster. It made me laugh. (which probably didn't help with his surliness) 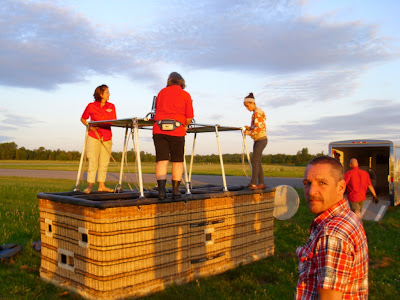 It was touted as the largest hot air balloon in North America. I have no idea if that's true (probably not) but with the pilot, we were 13 in that basket. All participants are asked to help with the setup and breakdown. It took about 30 minutes before we were ready to take off. 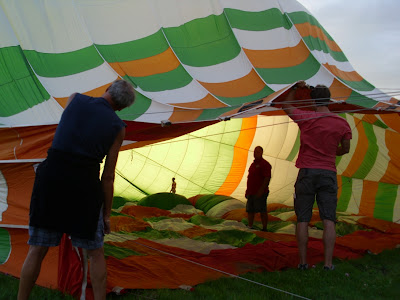 Our balloon really was huge. Look how small the girl looks in the background inside the balloon. The guy told us it held 315,000 cubic feet of hot air. (insert joke here) 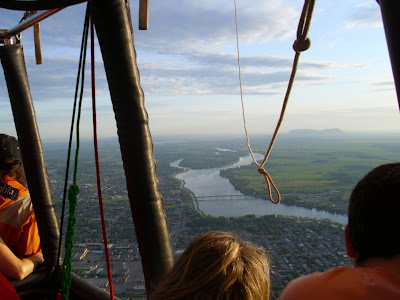 He took us real high at the beginning and then we stayed pretty low the rest of the time. He even grazed the cornfields a couple of times. The wind was carrying us at 47 kilometers per hour. 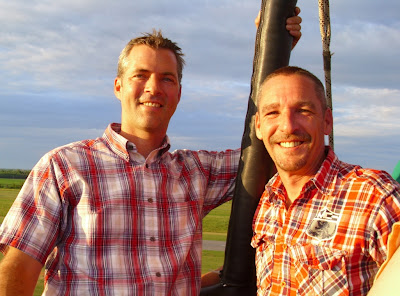 The nice passenger took this for us. I love the morning light. We saw deer frolicking (actually they were probably more like freaking out) below as we passed over vast fields and clumps of forest. There's very little wind though because you are part of the wind moving at the same speed as it is. 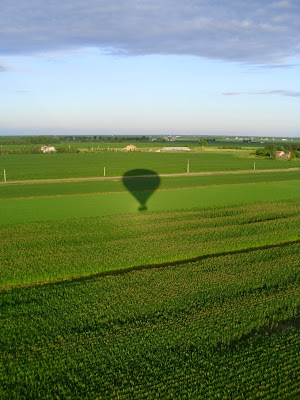 After about 45 minutes it was time to find a nice field to land in. We all took our crouched landing positions and the basket touched down and got drag-bounced another 20 yards or so before stopping. The nice farmer whose field we landed in let us look around his dairy farm while we sipped the complimentary champagne. I felt sorry for the cows in prison there. 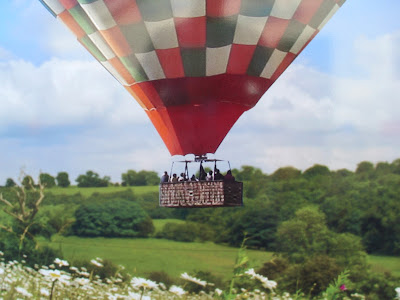 This shot is not really possible while you're riding. So I took a picture of the side of the truck that transported all the equipment. That IS the balloon we rode and the basket so we must have looked similar as we crossed the freeway.

And I took a little video while we were up there.

FINALLY you were able to do this! Very cool! But you shouldn't make fun of those of us who aren't morning persons, including (or especially?) Serge. ;-p

Now that looks like fun! What a great view!
Non-morning people of the world unite! lol

I've always wanted to do that but haven't managed it yet... maybe because I know it's such an early start. Although I think in some places they have sunset rides too. It looks great and your photos were excellent.

That's cool. I didn't know they made gondolas that large for balloons. I bet it was purdy up there.

Serge, you have my deepest sympathies. I am not a morning person either. How many gallons of distilled espresso from Tim Hortons did it take to get you even halfway human before that balloon ride? (And how were you able to dispose of the excess fluid up there?)

Torn, I take it His Canine Majesty is still not on speaking terms with you. Can't really blame him. When is your mom coming to visit and fix things by spoiling her granddog rotten?

Oh how beautiful! Glad to read this experience because I think I would be too terrified to ever do it myself.

It looks like so much fun! I'm bummed I don't have sound on my computer; I can't hear what's being said on the video :(

Looks like fun. However, if I were to go I would probably be too terrified to notice because all I would be thinking of is that a sphere of gas is the only thing keeping me up there.

You're so sweet to find Serge's monsterness sweet.

It's beautiful up there, but I don't think I could ever handle this. I'm pretty sure I'd toss my cookies.

I've always wanted to be brave enough to do that. Maybe someday. :)

Every time I see video of Serge, I think of the Tidal Bore video and I laugh. WTH eh?