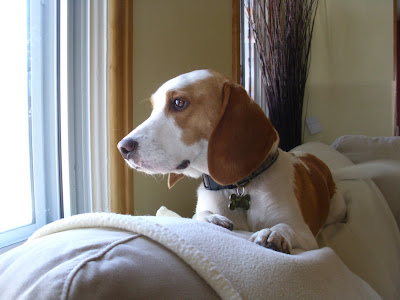 * There's our favorite pooch. Notice the blurry tail. That's cuz he wags it when you approach him. He's been pretty mellow lately due to the heat wave we had. He's much livelier in the colder months.

* Serge gave me a haircut after he boasted about having cut his own. He just number twoed himself (possible ew there) and it came out fine. For me, he number twoed the back and sides and left the top alone.

* When we got back from vacation, the tenant who was watching Georgie had bad news. Apparently his unemployment checks had been stopped and he has legal assistance in order to get them back. So he won't be able to pay rent for 4 to 6 months. Ugh. He has agreed to leave and we asked him to paint his apartment in lieu of rent. It doesn't cover all of what he owes, but after three years, we can give him a couple weeks free I reckon.

* It took us one day to find a new tenant 13 days before the apartment was to become vacant. It's an Australian couple here on work visas. Perfect.

* Ooh, ooh, ooh the big exciting news of the week is that we got approved for the "unmortgage" at ING. I was worried about the appraisal, but it came in higher than the city's estimate so we were golden. The loan to value ratio is low enough that we don't have to prove income either. The best part? Our monthly payment is going down by $350. Yippee! 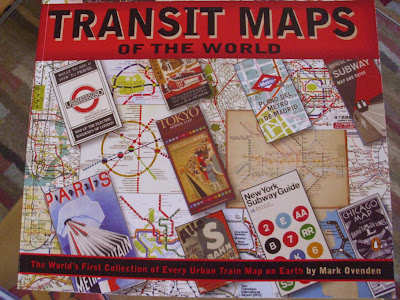 * This is my favorite thing that I purchased on vacation. You all know what a map geek I am, right? This book has all the subway systems in it from all over the world with a little history about each one. I love it.

* Serge and I have officially lived longer in this residence since we moved out of our parents' house as teenagers. Almost five years. The previous longest was 4 and a half years in Long Beach, California. 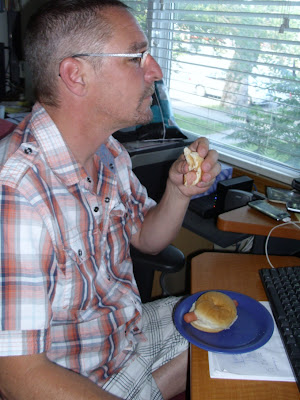 * I caught Serge being a bad boy. Hot dogs on hamburger buns. Would you believe this was his breakfast choice? Yeah me neither, that's why I grabbed the camera.

* When I dragged Serge out Sunday to shop for our friend's 50th birthday present, we passed by some young people downtown and the two guys were holding hands. This isn't out of the usual if you're in the gay part of the city, but this was in the touristy area. Loved it.

No, I didn't know you were a map geek. So am I, especially maps of subway systems.

Serge calls that breakfast? Then again, I'm not one to speak.

I'm also very sad about Jack Layton. And very pessimistic, too. I mean, what a transformation in only a few weeks! I know he's a fighter, but really? So sad...

I'm also very sad about Jack Layton. He is a lovely man and I am afraid to even think of what his absence at the helm of the NDP will mean for the Québec situation.

Still love your blog after all these years.

So sad about Jack!

And God bless Google Maps! I've waited so long for something like that to be invented.

From a map freak to another! ;)
Salut!

Okay, that book looks very cool. Perhaps a bit heavy to lug home, but very cool. Charlie boy is having a hard time whenever the temp goes above 80 (which in my house is often).
I've been here 8 years... a record for me. Middle of packing madness here... I have too much stuff.

I usually get 'numbered threed'! Two looks good though. And Serge did it himself? I'm impressed!

Jack has got to pull through this one! What a damn shame for this to happen to him.

Yay! Your regal beagle is back! And as handsome as ever. Wouldn't he have turned some heads in SF?

I'm sorry for your tenant -- it sounds like he was a good one -- but I'm glad the unit won't stay empty for long.

And then there's Serge. Mon Dieu, Serge, what are we going to do with you? All those dietary, culinary, and fashion sins, all in one photo! And looking more stoned than most Rastafarians ever get! Your gay card may get suspended for this, you know.

tell serge to cut each hot dog about 1/2 way through, like he was going to cut the wiener in to coins but not cutting through. then put it in the microwave. as it cooks it'll curl into a ring making the use of hamburger buns quite logical. :)

I also have lived at my current residence longer than any other place except the house where I grew up. Time sure is flying.

I am sad about Jack, too. I hope he makes a speedy recovery.

Indi is the same way about the tail wagging. Sometimes in a dark room, that's the easiest way to find her because I can hear her before I can see her.

When do we get to see the new 'do?

Hot here, too, and it's making our daily walks a little miserable. I'm ready for autumn!

Love maps! Growing up, my family spent 4-6 each summer traveling and camping throughout US and Canada, and my folks made sure my bros and I each had our own maps for each leg of the trip....total map geeks!

And thx for another sweet pic of Georgie---LOVE your doggie!!

All I have to say is "Serge, your weiner is hanging out!"

it is my weiner out of the hot dog burger but my leg from my pants...this pic is to much about my weiners.