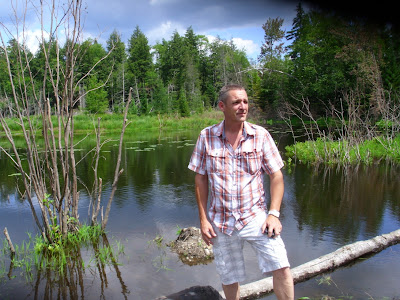 Serge felt all manly after having crossed the pond on that thin log without falling. He had his iphone in his hand ready to throw to me if he was going to go down. A beaver had built a dam there and blocked the hiking trail around the lake. When we arrived at the hotel Lac Carling, we checked into our big hotel room and were pretty happy with the grounds and facility. Then I dragged him on a hike after having coated my exposed flesh with insect repellant. 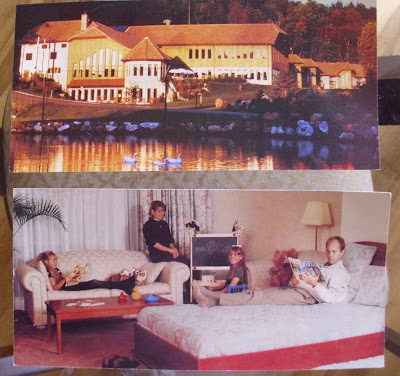 I didn't get a good shot of the exterior, so these shots of the free in-room postcards will have to do. The second one is hilarious, advertising their family suite. Did they find an old box from the 70's and decide to use them up? I don't know, but the couch was exactly the same material in our room. There were a lot of little run-down type problems but nothing terrible. I think the worst thing was that although they advertised paddleboats, canoes and kayaks, they were all broken or missing oars and things. Also, if you're not into golf, there's not much to do. I had the best massage I've ever had though, and I don't even like massages. 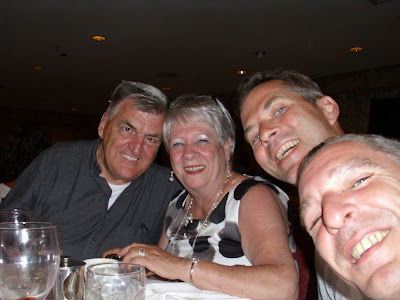 We went with my in-laws and dressed up for dinner each night. There was absolutely no music, not even piped in music while we were there. Weird. The food was decent but they seemed a little understaffed. I don't know maybe we were bored so we paid attention to all those details more. The place was busy though and I'm sure there were a lot of Groupon people like us there. But that's the thing, if you're going to attract people to your establishment, you've got to wow them to get them to come back and speak highly of you. 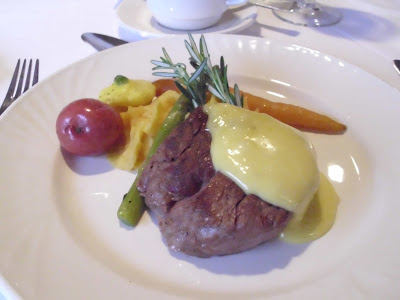 Filet mignon with bernaise. Had to pay extra to get that. Was it wow worthy? Meh. 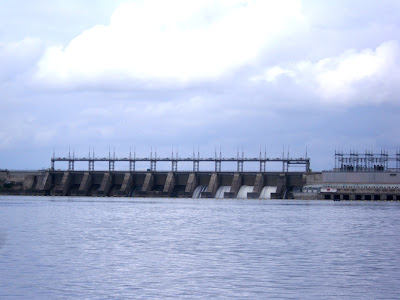 The second day, Serge and I went to the big dam spanning the Ottawa river and got a guided tour that was practically private. Only one other person was with us. It was so cool! We weren't allowed to take any cameras inside but the turbines were enormous and we got to go all the way into the belly of the beast. Those things generate a lot of heat. Best part? Free baby, free! Also, we learned that 90% of Quebec's energy is hydroelectric, 3 % wind, 7 % nuclear. They put up a map of North America and Quebec is so green compared to the states and other provinces. Sure there's a lot of environmental impacts from damming rivers, but the energy source is renewable and non-polluting. In addition, Quebec's grid is totally independent of the other systems, one of the benefits of having it "nationalized". Plus we pay the lowest electricity rates in North America. Sometimes government organizations CAN get it right. 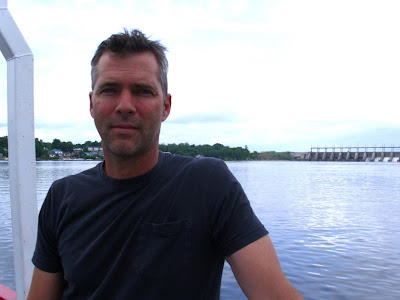 We decided to go home a different way and took a ferry across the river just below the dam. My turn to look manly (and old). It was a nice getaway and the price was right. We won't be doing any more traveling until October when we get to go back to Europe. Until then, it's home sweet home with the Georgiemeister. 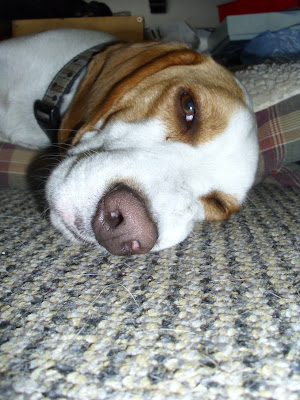 Posted by tornwordo at 3:21 PM

You don't look old. Ruggedly handsome and in charge.

Nova Scotia could learn a thing or two from La Belle Province as far as renewable energy goes! WOW, 90%....didn't know that one!
I'll tell ya what OLD is! lol

Aaw! That Georgie... what an handsome chap!

Not old -- just worldly-wise and a little tired. Georgie, on the other hand, looks absolutely zonked from his welcome cocktail and hour-long massage.

Now Serge is another matter. He's still obviously mad (as a hatter) about plaid. Too bad the shirt is too tight! (The pose is very manly, tho, and probably would have looked lots better if Serge had been wearing only sunscreen.)

And, not to get toooo personal, but. . .did Serge ever throw you his iPhone that weekend???

Maine is still trying to get its act together with regard to wind and tidal power, but we're moving that direction. I still think we should disconnect from the New England grid and connect to Canadia. It'll make it easier when we finally secede.

Great picture of Serge, but my eyes are still crossed from looking at his outfit.

There must be an obvious answer to this, but I wonder why cameras weren't allowed at the dam?

I laughed out loud at that Georgie pic. You get the best shots.

I think I trust hydroelectric power as much as solar power for a safe source of energy. The wind farms are hideous and they're discovering serious issues for people and animals who live within fives MILES of them.

It's a good photo of you, but you are really starting to look like your pop!

Whoa, the tan line on Serge's neck suggests he doesn't undo that top button very often. Love the manly look, tho. I would've been in the drink for sure.

I love how Georgie's eye is all smushed into the rug. He can look so comfortable, no matter what the pose.

OMG the damn iPhones. I could blog a whole post about them. Anyway.

Looks like y'all had a great time, in spite of the 70s hotel postcards. LOL!

Ok, too much about me having to throw my shirt away. I didn't want to spend more money on cellular devices because it is useless to spend more for getting one. Yes, it was a pleasant vacation that I will never repeat(Lake Carling). No, I was not MAD the sun is hitting my poor inpaired eyes my forhead shrink.

Does anyone knows who removed the man shoes in the postcard? That are on the poscard!

Do puppets are included on top of the flat screen TV that no one looks at?

Shoudn't the duck be in the bathtub with the kid?
and the parent looking at that new All you can do in Lake Carling magazine?

Last thing...palm tress in the room....there is not even an ice bucket, a man size ironing board, a decent iron, a none dripping toilet, a clean shower curtain, a room made before 4PM, a 4 start dining area with ok service but extremely slow...and so on.
Sorry...I was very desapointed.
Had to voice it!

After seeing so many food pics throughout the years, I've always wondered if you've ever had a bad meal. Seriously. Like ever?

This is just gorgeous !*love* it all as the messages, the pictures and the quality of the writing. Thanks !