Hey y'all, I'm just popping in before we go away again for the weekend. This time it's more local, a scant 90 minute drive into the woods to Hotel du Lac Carling. I loaded up on bug spray so I will be a walking deet torch. This is appropriate since I'm also a bug smorgasbord, I'll get 10 bites to your 1 so aslathering I will go. This is another of those Groupon type deals we scored. We got two nights hotel with five course dinner each night, breakfast two mornings, a welcome cocktail each plus a one hour massage each for $299. The reviews are good, so I'm excited.

Speaking of coupons, I learned a new trick when we were down in Boston. Birthday boys sister went out with us shopping for stuff and when we were in Best Buy, a lady came up to us while we were in line and handed us a 10 dollar off coupon that she couldn't use. Unfortunately, it wouldn't work because Apple products were excluded from the coupon's worth. So without batting an eye, Angela asks the clerk, "Well don't you have some other coupons lying around back there?" And the clerk started digging through the trash and found not one but two coupons, one of which actually worked. Digging through the trash people! It's going to be my new favorite line. Here's a pic of me and the genius coupon asker forer. I swear her shirt was purple but the photo says otherwise. 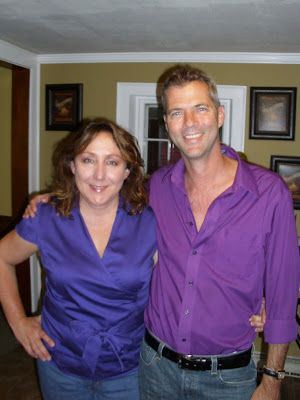 While in the Best Buy, I picked up (and was treated to for my bday) Katy Perry's latest disc Teenage Dream. It's become my new workout music. I have always loved pop music. Give me four chords and a rockin beat, a nice hook and a catchy bridge and I'm yours. A music snob I am not.

My eyesight is getting to the point where I'm going to have to actually go to the eye doctor. My reading distance has just about reached the limit of my arms but that's not the problem. The problem is that I get nauseous every time I read or focus on a game on my ipod touch. Apparently this is because of eye strain and it's only going to get worse and worse unless I do something. Crap. If it was just a headache I got, I'd probably tough it out, but nausea is my weakness. Maybe I should take a gravol (dramamine) before I read/play.


So I got a nice gift certificate from Daddy-o for my bird day and I used it to by a GPS from Amazon.ca. I was all excited to get it since we could use it for our trip to the country today. Well. The GPS had all 50 states from the USA loaded into it and that's it. It took a bit of insisting, but they finally are letting me send it back on their dime. Honestly, you're a Canadian company selling a GPS to Canadians and it won't work in Canada! Fail, fail, fail.
Posted by tornwordo at 7:56 AM

A good home remedy for bug bites that my sister swears by is to put some tobacco on the bite and then cover it with a bandaid. Have a great time.

Funny! Why is it that the 'bugs' pick on certain people and not others? Like me! and you! Do we stink better than the regular folk?

Have a great trip ....it looks to be a good place!
Every one is talking coupons lately...must take a look.

That's a pretty silly GPS to be available in Canada. They are mighty useful gadgets, however.

Can't you just update the maps of the GPS to include Canerdia? We call our GPS Mavis and she's a nagging bitch. She gets me out of the occasional jam though, so whatever.

Derwood is a mosquito magnet too. They bite him way more than they get me. He (and you) must be sweeter. HAHA!

Your getaway sounds great! Can't wait to read all about it.

GPS is great. It just calmly says "Recalculating." It never says "What in G*d" name were you thinking? I said RIGHT turn."

I'm not sure what to do w/this information. I'm flummoxed.

The photo indicates her shirt was violet (more blue) and yours was purple (more red). If hers was purple, what was yours -- hot pink???

And it's no wonder Georgie looked so cheerful and perky in the last post's photo. He must have heard he's getting a one-hour massage and a welcome cocktail this weekend! Lucky dog!

I generally avoid Best Buy because of their onerous treatment of their customers.

But it is interesting that the maps are U.S only. You might be able to buy updated maps online. But they usually cost as much as the GPS unit so you're better off just getting the Canadian version.

Have a good weekend!

i got my first pair of bi-focals at the tender age of 44. a couple of years before that my arms got too short and i had to have reading glasses. age is screws us all in the end (so to speak).

a good gps is garmin. you can get free map updates with it, unlike others that charge nearly the same cost of a new unit to update maps. our garmin kept us from being permanently lost in edmonton (they are doing major road fixing and alterations).

I await your review of the hotel -turns out our annual retreat will be there in November, so any pointers are welcome!

Get an iPhone and you will never need a GPS unit again.

I got my first glasses at 42, bifocals at 45. The progressive lenses are well worth the investment; I even got them on sunglasses. I understand that you can get them in contacts if that's what you prefer.

I avoided getting reading glasses for a couple of years and then when I broke down and bought some, I was mad at myself for waiting so long. I now have about five pairs of the things and love being able to read the tiny print on coupons and such without squinting and struggling.

I just got GPS a year and a half ago and felt like one of the last to jump on the bandwagon. I didn't think I'd get as much use out of it as I do but I love it now. Like Rox, my Magellan is officially "Madge."

Look who's rocking the purple shirt! And rocking it well, I might add!