The road to Montreal part 3

I went into the club that night jet-lagged and swirly-headed. I didn't feel like myself. I ordered a beer and surveyed the mostly white crowd with maybe a quarter Chinese. I was tired. I didn't think I would last long this night, but was happy I had found the place and knew I would be back during my six week stay. I was kind of zoning out, watching the dancers on the dance floor, sipping my beer when a very tall man named Shane appeared at my side.

"Hi, is this your first time in Hong Kong?....I'm Shane by the way," he said oozing confidence.

"You're shoes, and I've never seen you here and I really do know everyone here worth knowing. Come, meet my friends." Pulling on my arm.

I let him lead me over to his court of young men and he introduced me to them. I thought one of them was particularly cute, though I knew too that Shane was posturing as though he had claimed me. I played the new arrival, which was easy since true, and they told me all about life in Hong Kong, things to do, places to go.

We drank and danced and finally closed the bar and headed out for food. Our group ordered breakfast and we ate together and got ready to leave. It was about four am and we were standing on the sidewalk hailing taxis. Just as I was getting into my taxi, I made an impulsive move. "Come spend the night with me.... Just to sleep," I said to the cute one, Serge, who I had been secretly flirting with throughout the night. "I'm staying at the Ritz Carlton, and you can take the subway home in the morning." He hesitated a little too long, so I grabbed his arm and pulled him into the cab with me. We were off. I think Shane was very disappointed. 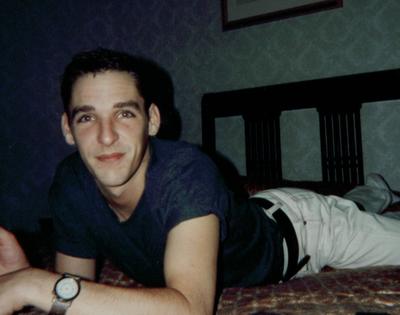 This is a picture of Serge that first night in the Ritz Carlton over twelve years ago. I am really glad I took a picture that night.

After room service and sex the next morning, we said our goodbyes and I got his phone number. I didn't think I needed to give mine since I was staying at the hotel. The following days were hectic as I began my life as a slave in the hotel. I met great people from around the world and who lived in Hong Kong working in the dining room of the hotel. Some ex-pats from Britain became my constant pals as we hid out in the British pub nearby on our afternoon breaks. (The employee cafeteria food was always Chinese food, so we went out to eat meat and potatoes. )

Serge kept drifting back into my thoughts, and I really wanted to see him again. Three days later, I tried him.

"Hey, it's Richard, remember me from the other night?"

"Good, I um, I was thinking about you, and so I called you."

"Maybe we can do something together?"

Serge was and is a francophone. At this time, his English skills were very rudimentary. We decided that I would visit his place on Saturday night after I got off work. I would have to catch the last train out, a forty minute ride to the suburbs. I arranged to get off early in order to catch it. I had directions, but they were unclear and used descriptions since neither of us could read Cantonese. "When you get off the train, go straight a couple minutes and look for the very tall building, there are trees and go up to the 19th floor." Needless to say, it was a real challenge finding his apartment in the pouring rain at night. Once again, I was on the verge of giving up, when I finally found his building, one of about 10 identical apartment skyscrapers surrounding a park and pool courtyard.

I arrived wet, and he quickly helped me into a robe, which I would wear for the next 24 hours. This was the weekend of falling in love.

Posted by tornwordo at 8:21 AM

This is getting good.

I've never heard the whole story before. Looking forward to the rest of it.

Have you seen Lost in Translation? it sounds a little like that... but more saucy ;-)

Ahhhhhhhhhh so you over here for sex reason ! =P

Hey it's the first time you mention your name. (I think).

How romantic. Can't wait for the next part!

"court of young men." I love that! How do you say faggle in cantonese? Every time I hear the name Serge I'm reminded of Edina's long lost son from AbFab.

OMG, what a fabulous pic. sigh, I love our Serge.

Sorry Guys, I consider this picture the worths of some of my many years....I have much better ones....but Rick will one day show "the ball" one.
Love you all

After all it is not...I still love my boyfriend all those years.

OMG, I am loving this story so far. How great that you met Serge this way. And what a wonderful thing that you took that picture! What a great memento of that night.