We had a great time on the cruise. By that I mean, we didn't have a bad time on the cruise. By that I also mean that it wasn't really relaxing. Because the three port days with all the getting on and getting off business, arranging to DO things at the ports, dressing up for the two formal nights aboard, and drinking and dancing late in the disco all led to a kind of stressful vacation. We played hard. But we slept little. Our livers are happy to be home. 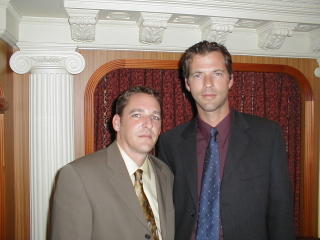 Last Thursday, we woke up in the harbor of Georgetown Grand Cayman. There were four cruise ships there that day unloading ten thousand passengers onto an island with a population of thirty thousand. The scene at the docks was insanity, with thousands of tourists clogging the streets wandering around figuring out what to do there. We were making lots of mooing sounds since we felt like cattle. 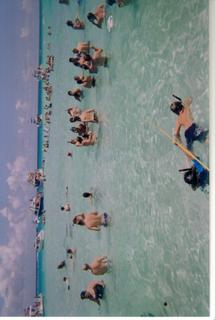 (I don't have time to fix this picture, but it is Stingray City)

We had heard good things about Stingray City and purchased a tour from a street vendor for a three hour visit by bus and boat. Doing it this way cost half what the ship wanted for the same tour. We were led to a bus that wouldn't have looked out of place in Tijuana. The driver told us a bit of history as we rattled and clunked down the highway to a small harbor where we were laded onto a small boat. Fifty or so passengers climbed aboard a boat designed for 20 and we head out to sea. On the way, iguanas darted in and out of the shadows and jungle growth. It was a choppy and windy trip out to the sandbar abutting a coral reef where fifty or so similar boats were giving the same tour.

We donned masks and snorkels and jumped in the three foot deep water. Almost instantly we understood why people were periodically shrieking. Large shadowy figures slithered through the water and then glided past, brushing up your legs and torso. It was the stingrays looking for food. We had been told that this is a unique place in the world where humans have come for many years to feed the rays and so the rays come back and "ask" for food every day. Probably heaven for them. These stingrays won't even sting you if you step on them because they are no longer afraid of us.

I fed them, held them, pet them and felt little zings of fear zip through me each time they passed.

In that water with all those people, there was no difference between rich and poor, black and white, language or culture. Every single person there was out of their element and bonding over the fact that we were standing there defenseless while monsters swarmed around us. The laughter was magical.

After the thirty minute stop with the rays, we went over to the reef for snorkeling. Our guide found a shark and started feeding it. I got out of the water. I have a thing about sharks - I'm scared of them. (Plus I had already snorkeled in Cozumel.)

After that, we headed back to the little harbor and reboarded the bus. We were half an hour behind schedule and I was getting nervous about missing our departure time. The bus driver, being late himself, drove like a NewYork cab driver and the bus careened and rattled down the main highway.

Two fiftyish blondes were at the side of the road waving at traffic and the bus driver stopped to offer them a lift to town. They came in back and sat next to us. They had been drinking at the beach all day but just "knew" someone would stop for them. (They were, however, standing on the wrong side of the road for the direction they wanted to go. But hey, drunk blondes.)

Suddenly traffic came to a standstill and the driver said, "Hang on, we're taking a shortcut!" Now the real ride began as we zipped down unpaved roads making everyone a bit nervous. I felt like I was in a cartoon.

In the ensuing ten minutes, we learned from the blonde women the location of their hometown - Tulsa, The size of their homes - mansions, The level of their education - "Y'all was smart to take this tour." 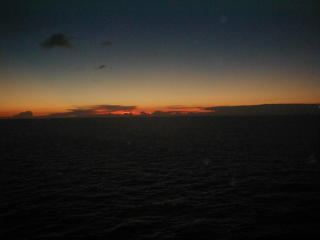 As we wound back to the port, we passed through some less ridiculously rich neighborhoods. The type A blonde said, "Y'all look, this is where the poor folks live, but they do a real good job of hidin' it here."

That was when my hair caught on fire. I probably would have gone off on her if I wasn't so paranoid about missing our ship. We got back with just 10 minutes to spare.

The sunset that night was awesome.
Posted by tornwordo at 5:57 AM

I had a similar cab ride in Tiajuana. I was in college and the group of us had to hold the doors shut as the driver sprinted through streets and highways littered with broken chunks of concrete and ignoring all traffic signs and lights.

Sounds like a great trip. I've learned to be ignorant of Oklahomans, I suggest you learn the skill as well and save your hair.

Welcome back! Glad the trip was a success (well, more or less). The pics make me jealous!

I was once driving a visiting American (potential) supplier from the south around Montreal. At one point I asked him "So, how do you like the city so far?". His response: It seems really great. But one question: Where do you keep all your black people?"

It's probably the only time I let my personal feelings superceed my professional responsibilities. I looked at him, said not a word, turned the truck around and took him back to his hotel.

Bet he was related to one of your Tulsa blondes.

The pictures are great, and it sounds like your liver had a good time. Don't worry, they are amazing in that they can repair themselves ::grin:: As for the Blondes, it simply points out that there are still so many ignorant people out there. Unfortuantely they play up their roles don't they?

Good to see you back.

Sounds like you had fun, but one thing you said would keep me from going on a cruise: unloading ten thousand passengers onto an island of thirty thousand. That just blows my mind and encourages me to go somewhere "off the beaten path".

And later? It's all about extremes... the good with the bad. And those ladies sounded bad.

I'm no longer a blonde.