I'm not making it up either

Spouse had a boo boo yesterday morning. He tried to avoid me knowing about the boo-boo but when I heard the shower go on at 7:30, I knew something was up. Normally, he doesn't shower until right before he has to go to work. It crossed my mind that perhaps he needed to go in early for something, so I went to the bathroom to ask him. When I opened the bathroom door, there he was standing next to the tub with his robe in his hand, rinsing the robe in the shower. He noticed me and immediately said sheepishly, "I made a pet-sauce." Pet is the word up here for fart. Then I started laughing helplessly because there was a spot on his thigh where the robe must have brushed against him after having sopped up the pet-sauce. "Ewww, you've got it on you! Just get in the shower for chrissakes," I roared. See now if I had made a pet-sauce, I would have marched in to wherever spouse was to show him. He, on the other hand, felt ashamed and was probably trying to avoid something like, oh I don't know, me posting on the topic. He's just lucky I didn't get the camera. I thought about it, but that might have ended up being a declaration of war.

Spouse's mom reads this and this is for her : (Please don't tell him you know about this!)

See, he never bothers to read the blog unless someone tells him about some salacious story or picture. I suppose that while I'm at this post I can go ahead and tell another funny story. This happened while I was in Vegas. Spouse sent me some pictures of himself naked that he had spliced into works of art, such as the ceiling of the Sistine Chapel. The funny thing about the naked picture he used was that I had taken the picture and not told him about it. I think I mentioned it here, he was asleep on the couch, the sun was shining on him and though he had his robe on, it was open and his arm was hanging down. His goods were, what's a good word here, rather robust looking. Anyway, he must have found the pictures on my computer (easy to do, all pictures are sorted by month taken) and then had some fun with them.

The day after I had received the email, I noticed that other people were writing him to tell him how torrid and sexy the photos were that he had sent them. I was pretty shocked that he would send naked pictures of himself to family and friends. It seemed to me that maybe he had drunk a bit much and sent out the emails. I know I got mine at 2:30am. I mentioned to Laverne that I couldn't believe he had done that.

When I finally got him on the phone, he told me that NO, only I had received the naked pictures, everyone else got a PG version. I don't know why, but that made me feel all warm and fuzzy inside. Still, it really would have been funnier if he'd drunkenly done that. Here's one of the PG versions. The x-rated version is now my computer wallpaper. (Daniel, please note ; ) 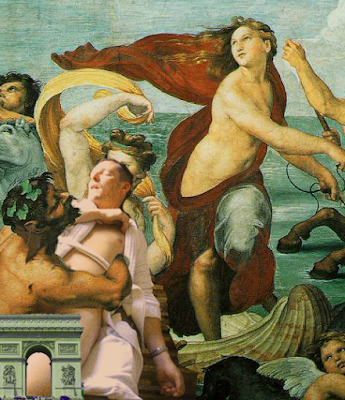 Posted by tornwordo at 6:45 AM

That's quite a classy cut ;)

I can see why your spouse got a web-design job :)

Pet sauce - lol, and ew at the same time.

happy birthday to you!!

Wow - good job with the photoshop.

And "Pet-sauce" - LOL. I've lived here most of my life, and I'd never heard that before

Oh man, you are in trrrrrrouble if Serge reads this.

You men and your "pet sauce."

I've not done that except for the time I had food poisoning. I think that excuses it.

And I'm glad I finally got to see a version of this picture!

I remember years ago while i was watching the TV, the bathroom door slightly creaked open, and a little timid voice asked, "Hey, could you bring me some new undies...." I knew right then that there had been POO POO UNDIES made. Hehehe.

I guess we were due.
Been awhile since we had a story about poo.
Alls I can say is, EWWW!

I need to take another shower now.

Robust looking...well that's ONE way to put it :)

I do love a good Shart story!

Pet sauce...that is one euphemism that is actually quite vivid.

I love the photo of spouse, he fits right in!

The 'pet sauce' story made me laugh out loud! The photo created a similar reaction. Too bad you didn't share the original.

Why should the pet be blamed when a wet fart leaves it's mark? I lol and can't stop grinning to think Serge had such a large Pet-Sauce that it went through his robe and wrapped around his thighs. ed

This is funny! I love the picture; very classy.

I just hate it when you can't trust a fart.

Great photoshop skills on your man.

Who knew L'arch de Triomphe was the different between PG and R!?!

Love the nymph picture of Serge!

Pet-sauce. That's a much better euphemism than, " I think there were some lumps in that last fart." ;-)

I think that Serge thought he was cropdusting but ended up fertilizing instead.

Do you tag all your poo posts? How many is that now?

Hey! Don't you knock before walking in on a guy trying to get rid of the evidence?

Serge was around when they painted the Sistine Chapel?

How did I miss this post? I demand a picture of the computer wallpaper. I deserve all the small distractions you can throw at me right now.

I thought they were called wet ones.