I brought home a bottle of Absolut Los Angeles. It was in the duty free shop at the airport. It's vodka infused with some things, most notably on the palate that of blueberry. It reminds me of a blueberry pop tart. Apparently this is the second of their limited edition city vodkas, interesting, but I don't really see the link between blueberries and LA. Nonetheless, I drank way too much of it last night.

Serge did a fabulous thing while I was gone. He had our place painted! He planned it all behind my back and had the guys here the day after I left. I can't believe how long we suffered with baby blue and peach everywhere - nearly two years. Now it's a pale greenish yellow (Serge is correcting me, apparently it's "sage") with a burgundy color which ties in nicely with the rug and the art. 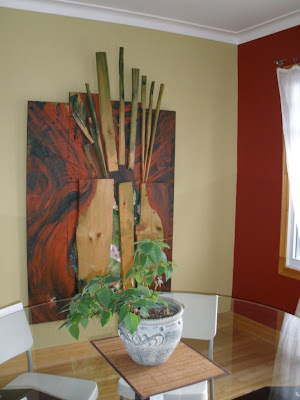 I watched a bunch of movies while I was gone. At mom's house, she has a pretty big library of films and I got to see several I've never seen before. Prairie Home Companion was a bit dull, but I liked both Johnny Depp films, Don Juan DeMarco and Finding Neverland. I saw something else at her house too but I can't remember what. Here's mom with her kids. 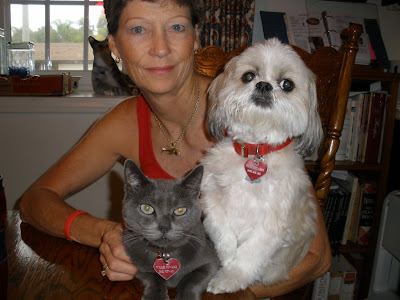 On the plane I watched 21, Ironman, What Happens in Vegas Stays in Vegas, Flawless and Made of Honor. That personal video system is the only way to fly. I liked all of the films I chose and am glad I did not spend $60 to see them at the theater. Now my vacation is over and I'm working Monday to Friday until Christmas. I thought we were going to ease into this, but no, my services are required daily.

And for those who are curious, today is my 47th day of smobriety.
Posted by tornwordo at 6:31 AM

Damn! I love those colors - especially with that art!

I enjoyed Finding Neverland as well. It send me back to research Barrie's life.

Absolut LA sounds like it should have a smoggy aftertaste.

Serge wins an award for surprising you like that. I bet he was busting at the seams to have you walk in the door.

Welcome back to the grind. The next time you get a vacation, there'll be snow on the ground. *sigh*

Hang your painting higher, so that those spikes nearly touch the ceiling. It's too low where it hangs now.

That is so, so cool. I love the idea of crankyman Serge planning a surprise for you.

And man, that's a lot of movies.

That Serge! I would have fallen down on the floor in a big heap of joyous tears if Derwood hired painters behind my back. Bless him!

You can make your own fruit-flavored vodka. It's totally easy!

Your mom looks so young! Her kids are adorable.

I really like those colors! Good choices. Baby blue and peach? Oh my gawd, how did you last as long as you did!

Ooohhh la la...a new sexy picture in the side bar, I see (or am I just behind the times??). As for the blueberry vodka, I had a drink last week called a Blueberry Ginger -- blueberry vodka, ginger ale, and minced chopped fresh ginger. Fantastic!

COngrats on the 47th day, and the new color scheme!

And I think your siblings are adorable!

I respectfully disagree with RJ March about the painting needing to be higher.

Many people's instincts is to hang paintings at eye level. My partner, who is an interior designer among other things, has taught me that in fact many works of art look best lower to the floor. Sometimes it's the opposite, depending on the work.

In this case, you have shown off the boards which stick up to best advantage, by having space above them on the ceiling. Very nice paint job, Serge! Wonderful homecoming surprise.

That new paint really looks nice. Serge did a great thing there.

Love the new color scheme--three cheers for Serge!! Agreeing with RJ though about raising that art just a little--it looks quite fabulous, but hidden behind your table!

Your mom's cat looks like a cousin to my boy.

"Smobriety"?!? I love that. Guess I haven't been hanging around QuitNet often enough yet to have picked up all the lingo...or have you been coining new words again? 29 days here!

Serge did a great job picking out the colors. Your place looks fab!

Congrats on your continued smobriety!

Just how long was that flight?

Go Serge! How sweet of him!

Wow - what Serge did - very very cool, that.

Ok, I'm in love with Serge now. What a sweet thing to do! I very much like those colors.

I like the new profile picture. The old one was a handsome picture of you, but the background had a piece of trim growing through your head. Very uncool.

I love your new word, smobriety! While it stinks to have no days off til Christmas at least you have money coming in. I've been off from school since June and the well is dry.

Nice picture of your mom. Holidays seem to go by too fast, but your past three were well worth it. I know I enjoyed the pictures, etc.