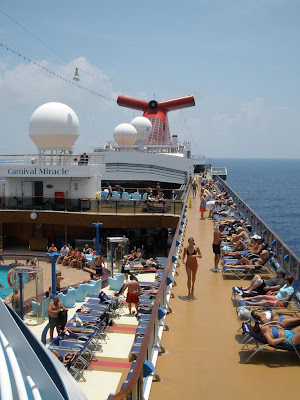 It's the last day of the cruise. We are headed up to New York City and overnight we left the tropics as evidenced by this morning's chill. As a treat, and because Serge was still sleeping, I decided to go to the dining room for breakfast. I had heard that eggs benedict was/were served there, and, well, if there's one thing I can't resist, it's an egg mcmuffin with hollandaise. Even the pussy (to be read as the adjective form of the word pus) eggs don't bother me since what is hollandaise anyway but creative yolks. When you arrive at the dining room they ask if you want to eat with others or not. Normally, I would just eat with others, but it being first thing in the morning and me being coffeeless, I opted for a table alone. I figured the book in my hand would have said it all, but they asked me anyway and showed me to a table that I could have turned around and touched. Protocol was followed though and the lead hostess handed her helper a menu and asked her to lead me to table 217 which, of course, we arrived at instantly. It was like if a cashier had an assistant to hand you your change. I gladly accepted this table figuring I was that much closer to having coffee flowing down my gullet. It also crossed my mind that this was a kind of punishment, that hogging a whole table to myself merited being seated in the worst spot in the room. Even though I had a book, I didn`t get much reading done because I was eavesdropping on all the patrons arriving behind me. It`s been a long time since I worked the door of a restaurant. Did I really tolerate such horrible treatment when I worked in the biz? I suppose I did but boy I wouldn't be able to now. Everyone who came in said something along the lines of, "Gimme a window table." No please, no may I , no would it be possible. Just an endless parade of I wants and give mes. The more outrageous wanted a table alone AND by the window AND far away from the kitchen AND with a particular server. Obviously the hostess was unable to seat everyone at the window, so you can imagine the displeasure expressed by some. You'd think they had just been told the restaurant was flat out of breakfast. Since this was happening behind me, I couldn't see who was behaving so boorishly. My imagination filled in the scene with a cavalcade of warted trolls and shriveled tanorexics shaking their rolexed wrists in anguish. Really, I've seen more polite teenagers, and that's saying something. When my plate arrived, I cut each of the eggs benedict in two and then each half into three giving me about 12 bites. They were quite delicious and though no one would have batted an eye had I ordered a second plate, I couldn't help feeling guilty for the humanity arriving behind me. These folks have enough trouble without the pig asking for more eggs benedict. When I left, the hostess thanked me cheerfully and reminded me that tonight was grand marnier souffle night. Thank god our table is far from the door.
Posted by tornwordo at 3:41 PM

I'll never understand why people are rude to people they need something from. It's gross and disgusting.
Mmmm... Grand Marnier soufflé... sounds delicious!

English muffin is a good base for many meals. I am happy to eat eggs Benedict whenever it is required.

I look forward to your return to blogdom.

Two people you are never rude to: The people who serve you your food and drinks and the people who teach your kids.

There are days, a lot of them, that I hate people...the society we live in....those we rub shoulders with. They are rude. They are greedy and arrogant...and I hate it. Having said that, I wish you a speedy trip home and happy journeys!

I wonder if the bounty of the cruise ship makes people more willing to say things like "Give me a table by the window". Because virtually everything is possible on a cruise ship, can it make them more rude than they'd be if they were actually paying for the meal at a non-floating restaurant?

Was that couple from the Jardin Botanique on board? My career in the food service industry consisted of 8 months as a dish washer. I didn't even have to deal with the diners, but I swore I'd never do that kind of work again. My next job was shoveling shit in a horse barn, and it was more enjoyable by far.

Oh, and the proper adjective meaning "pus-like" is "purulent." Another option would be "suppurative." I remind my staff of this frequently.

Hopefully the ship's crew have formed social relationships with each other so that they can vent about the annoying passengers in private.

Nothing like buffet breakfast on a cruise ship. Starting with smoked salmon and/or smoked trout; eggs to order, sausages, fruit, toast/ muffins. Enough calores for the day.

You're going to be in NY and didn't visit?!

Another reason I'm glad I'm not in the service industry.

Unfortunate for you but I'm glad your coming back home!