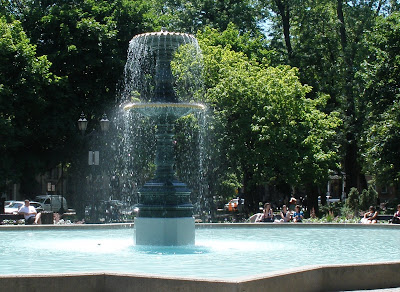 I took advantage of the gorgeousness that was yesterday's weather. Low 80's, dry, crystal clear with a breeze. Because my feet were doing alright, I went on one of my long walks. I haven't blathered about my feet and hand problem much but it's been maddening. I've had several day-long episodes where it feels like they are burning/tingling. If you research burning and tingling feet and hands on the internet, you'll find many others who experience it but no probable causes. It could be something as little as a pinched nerve or as major as multiple sclerosis. I've decided to start taking vitamins again hoping that does the trick. There are people out there who've had years of tests with no diagnoses and just have to manage the pain. I shudder to think. 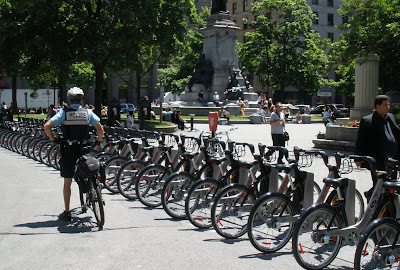 Haven't tried out the Bixi bike rentals yet. It sure seems like they are more often parked than used. It reminds me of the salad spinner we bought a couple years ago. Parked and never used. 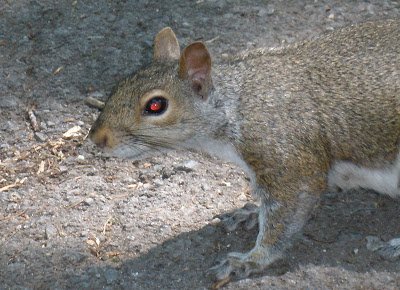 Strolling through Park Lafontaine, I wanted to catch a picture of a crow, pigeon and this guy all plucking through the same little square meter of grass. It was such an odd looking trio. As soon as I knelt down though, the squirrel ran right up to me and begged. So I took this pic of him and fished out a peanut from my bag which I carry for just this purpose. 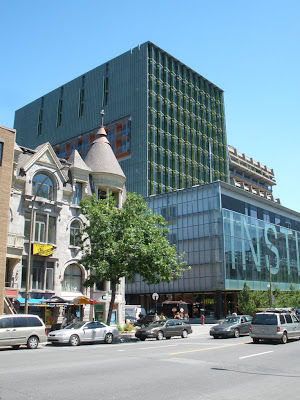 The blend of old and new architecture is one of the things I love about this city. Since I'm a born and raised Californian, this always impresses me. 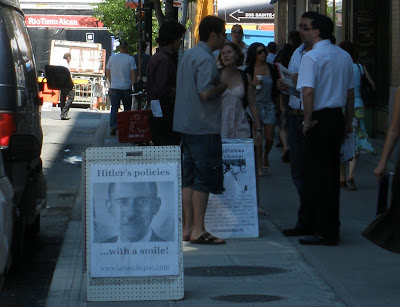 Okay this I don't get. I didn't stop to inquire either but check the website. It seems bizarre to have this in Montreal where we already have that nazi health care thing going on. (Smirk.) 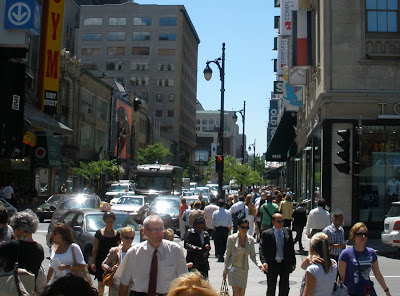 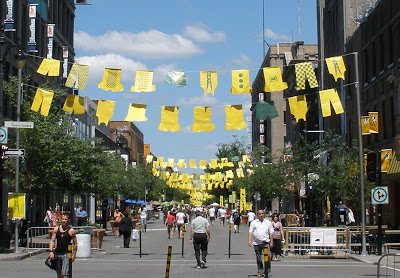 After I procured a pair of jeans at the Gap (on sale for less than half price) I went down to the village where they've closed down Ste-Catherine street to cars again for the summer. One thing that really struck me yesterday was the number of help wanted signs there were. It seemed that simply everyone was hiring. I've already got a full time summer gig starting July 20th (I've never had a summer gig) and I got two calls yesterday asking if I could work full time this summer. Bizarre! It's also interesting to note that real estate prices have never gone down here, they are still up, up, up. This is probably a North American anomaly. 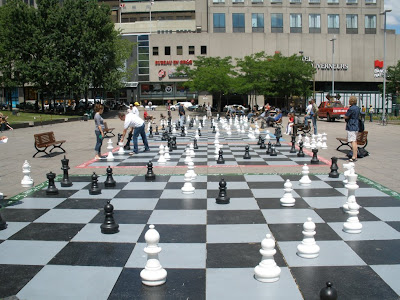 This was new too. Six huge chess games set up around Metro Berri-Uqam. I haven't played since I was a kid, but it looked like fun. 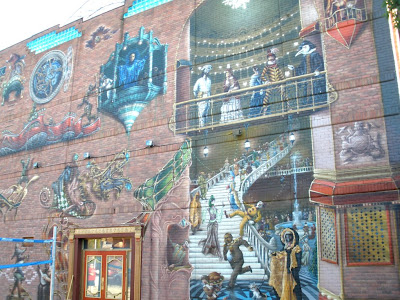 One of the tools to fight grafitti is to paint elaborate murals on one's brick. This one was especially bitchin'.

Today is the big Quebec holiday and the parade passes right in front of our house. We'll watch from the balcony and take a few pics for tomorrow.
Posted by tornwordo at 6:20 AM

Sorry to hear about your hands and feet. And you may be right, it's one of those things you'll have to live with, sad that medical advances can't cure all that ails us! I have a problem with my foot, it's a known issue called a neuroma, I've had it removed, but it came right back. It causes a severe burning / pain sensation in my foot when I ride a bike. It sucks big time :-(

Summer just makes everything (and everyone) look prettier

Squirrels are all evil minions of Satan, as shown buy this guy's red eyeballs. Evil, every one of them. :)

What about accupuncture? Maybe that would help the hands and feet. You never know! I've been thinking about going (for ALL my ailments) because a couple of people I know have been going for their ailments and it's helping.

I love it when you go out and about with the camera!

And house prices haven't really come down here either. And people are still hiring, you just have to look a little harder. Ahh the recession.

I know we all depend on Dr. Internet, but have you consulted with an actual, live MD about your hands and feet? I don't want to nag, but it might not be a terrible idea if you haven't.

Squirrels are just rats with a better wardrobe.

Bonne fête! Somehow I always think that St. Jean Baptiste is later, but I think I confuse it with Bastille Day. And 5.5 hrs southeast of you, we spent yesterday with rain all day and temps in the mid-60's.

We took to referring to the plaza at Berri-UQAM as "the junkie park" because of the crowd that hangs out there, and I think I forgot to mention to you that we saw one of your white squirrels in Lafontaine.

Beautiful mural on that apartment building! Unfortunately, that doesn't always solve the graffiti problem. In the little southeastern town in Arizona that I used to call home, my husband tried to address this problem by painting a beautiful mural on a graffiti-ridden wall.

It was graffiti'd over within 48 hours.

You've got our weather. It's been gloomy and foggy for at least three weeks.

I don't like parades unless I can watch them with a cocktail from a balcony.

If you've not done it, I'd go along with GayProf just to be sure it isn't something there is a cure for.

I'm sitting here with the temp reaching 54 F, and waiting on rain. Montreal looks like paradise.

Such great pics of Montreal! I love looking at them, but I still don't want to *be* there. The mural is fantastic. And I didn't even know they'd closed Ste-Cat for the summer. An idea that was long past due, especially given the smog warnings in the city each summer (and even in the winter).

Thanks for posting those. :)

Such a beautiful day...but that squirrel looks evil, very evil.

I wanted to enjoy the stroll, but I can't stop thinking about your health issues. Get yourself to a doctor ASAP. You are describing symptoms of nerve damage and, depending on its cause, that can be permanent if you wait too long. Get your system checked—blood work, etc.—to eliminate the serious causes. Don't wait! We want you around for a long time, so we expect to hear about your doctor visit soon.

What exactly happens on St. Jean Baptiste Day? Do you all go out and get baptized?

Montreal is a cool city. I didn't take advantage of my proximity to it (70 miles due south) often enough growing up. Montreal was a place to go for the ocassional baseball or hockey game. But the city really does have a lot more than that to offer.

Ottawa on the other hand, my family and I tried to make it there at least once a year to go bicycling (usually over Memorial Day weekend) and enjoy the sights, sounds and overall culture. As such I developed a bit of a pro-Ottawa/anti-Montreal bias (however rational/irrational that bias may be).

How wonderful that rampant unemployment and foreclosures are not the problem for Canada that they are for many places in the US.

Thanks for sharing your views of the city scenery. I hope that your hands and feet feel better soon. I'd hate to experience that for years. Hope the vitamins help.

You know how I feel about feet pain. I hope yours goes away with no further problem. But let's talk about something else like thanking you for sharing such great photos. You always take good pictures and give us a nice peek into where you live. Take care and as I said I hope your feet feel better soon

Adding to the "get thee to a doctor" chorus. Canada has freaking universal health care, so there is no excuse. Go to a doctor now. I'm a big fan of vitamins but they don't cure things, they just help keep you healthy if you already are. I'll say it again: doctor, ASAP.

We haven't had a sunny day like that in quite sometime. Send it down our way -- along with your positive economy.