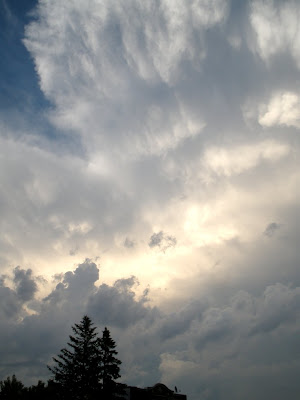 We finally had a thunderstorm yesterday. It was competing with the news of Michael Jackson's death so I was alternately outside watching and inside checking the television. It was strange how the joy and sadness competed for my being. I felt guilty for enjoying myself even though that's useless, I mean I didn't even know the guy. And poor Farah, having her death day overshadowed by his. It always saddens me when people are gone before their time. Ed McMahon's death we can understand, but Michael's? Just sad.

Today's my last official work day of the session. I say work, but really I'm getting paid to go out to lunch with my students. I'm hankering for a good smoked meat sandwich. After that I may pop out to the movies. It's housekeeper day and I hate being around when she is. Still, if there are more thunderstorms around, I'd rather watch the great big movie in the sky than be trapped in a darkened room. The decision will come down to a choice between sky, Up and Food inc.

We're on season three of Nip/Tuck now. We find a lot of similarities to this series and Six Feet Under, only this is two guys running a plastic surgery business in lieu of an undertaking business. Last night, there was a pretty good scene which demonstrates why I love the show. (Though not as much as I loved Six Feet Under. I don't know if it's possible to outdo that series.) Here watch if you have a couple minutes. The video is safe for work, the audio not so much.

Posted by tornwordo at 6:02 AM

I'm more sad about Farrah. She was the same age as my mom.

We had a little rain yesterday that was inhaled by the grass and everything else that is so parched. We need more though!

This is definitely one of my favorite over-the-top shows.

How much do I love your little giggling during the end of the clip?

Far too young. Far too sad. For both of them. I mean, I'm not so far behind.

I spent most of the day sad because these two people have been in the news my whole life! I was really sad for Farah in that I felt like she was owed her own day of sadness..... and all day I kept waiting for the news story to break that it was all a mistake about Michael. I saw him in concert at the Stad O. What a night!

In a way I feel like death may have been a welcome relief to MJ. As he aged he developed so many odd behaviors and inappropriate views. I truly believe he was mentally tormented. Very sad.

Glad you are enjoying Nip/Tuck.

It's not like she was asking them to load the Dishwasher. That is so funny. I wish I had Premium Cable. ed

Finally a thunderstorm??? Not where I'm at.

Judging from your photo, you had some of, or the same, crazy cloud activity we had (one hour NE of you). Weird, ragged black columns jutting up or down. Definitely a show in itself. I always hope I will not be stuck indoors somewhere when a thunderstorm comes around.

Now that you've finished 6FU, have you also turned to Dexter, in which Michael C. Hall ups his hotness factor by a few million megawatts?

I was sad for Farah. Not that his loss won't be important, but it seems likely that Jackson (either directly or indirectly) caused his own death through some drugs. Farah, on the other hand, had some really terrible luck and fought really hard to stay alive.

I totally get what the lady was talking about, but her sons are probably pretty messed up, saving their sperm for mommy's face and all.
A rich and vital brew!