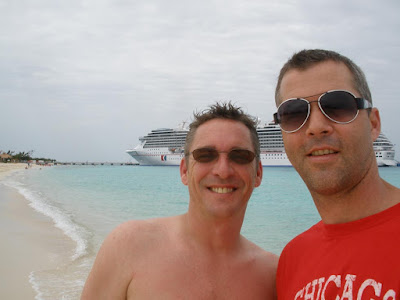 One thing I love about cruising is how all the employees come from exotic places. The bar server from Sri Lanka smiles and then remembers her heritage and stifles it. Our dining room waitress is Mila from the Ukraine. "But I'm really Russian," she tells us as though we surely understand the significance of this distinction. I love the Ruskies though because they are nothing if not blunt. We ordered a chocolate martini last night in the casino and Irina announced, "Is no good, I make you tiramisu martini instead. Is more money but you can afford." We waited for the giggle or smile at her little joke but instead she fired up the blender. At the barbeque yesterday, I was in line behind a lady while I studied the condiments available for the hot dogs and hamburgers. "I want a hamburger," she started in, " but not one of those overcooked ones on the left, give me one of those on the right there." I don't know how she did it, bit it was both an edict and a whine, and at the risk of appearing anti-semitic, I immediately hated her. The Indian guys tending the grill explained that they weren't allowed to serve half-cooked burgers but she wouldn't be swayed. "I don't understand why you can't give a customer what she wants." Not only whining now, but referring to herself in the third person. Suddenly I thought about how facebook status updates might be having a bad influence on us. Now if it had been me, I'd surely have let a bit of drool escape onto her burger but the nice Indan guy said, "I'll give you the less cooked one from the left side." Our room steward introduced himself as "Efran" even though his nametag clearly reads Erfan. I assume no one can ever get his name right so he just introduces himself this way. He is from a country in Asia, so of course he is quiet, polite and efficient. He remembers everyone's name. This morning as Maurice from Haiti bused our table, I said thank you, noticed his country of origin and said, "Ah, vous parlez français?" A stone couldn't have been more stoic as he replied, "Yes." Later I saw a crew member dart through a door marked "crew only" and I spied a sign with a big yellow smiley face. Under it in big letters was written "Give us a smile!" And this is when it struck me that maybe we are the weird ones. Smiling is more natural for us because we have been taught to put that face on, grin and bear it comes to mind. And of course this must make us all seem fake. I imagine too that it's pretty hard to feel smiley when you are working 7 days a week 12 hours a day. Still, many of them do manage a smile and I can only hope that this garners them more tips.
Posted by tornwordo at 3:28 PM

Glad you are enjoying the trip. I wouldn't let anyone trick me into buying more expensive drinks though. Smiling? let a smile be your umbrella...and your Ass will be soaking wet! ed

Go ahead and smile. It costs nothing and it might make someone feel good... even if he is unhappy with his job.

It's a whole lot easier to smile as a customer, and I try to make a point of it. I could never work in the service industry like ships' crews. I'd be like the Russians in that regard. "Here."

Thanks for checking in with us (and for the smiles)!

She can't understand why they won't give a customer what she wants? How about a piping hot cup of coffee, ma'am?

She was probably hoping to get sick from salmonella poisoning and be able to sue the cruise line.

In the words of Dr. Frank-n-furter, "It's not easy having a good time - even smiling makes my face ache." My last super-boss (boss of my boss) always "smiled"; looked like she was baring her teeth. She was a real card carrier, and I think she knew exactly how she looked. All sweet talk in your face and knife in your back, if you know what I mean. But I'm not bitter.

You're looking like a celeb in your Elvis glasses. Enjoy the rest of your trip!

And yeah, those sunglasses are something.

Glad to hear from you. I hope that you and Serge will continue to enjoy your cruise. Here is a little distraction for you. For some odd reason I immediately thought of you: http://banksy.co.uk/

so glad you were able to find a minute to update us! hope you're having a blast!!

This confirms that you are officially a full-blooded Canadian now because look how damn friendly you are being out there on the high seas!

Now I gotta go back and check out the shades...

I am glad that you are enjoying yourself. I barely survived my stint in retail. At one job, I remember that we rewrote the lyrics for an R.E.M. song to be "Cranky, Tarnished People" as it reflected our experiences with the general public more accurately than the original.

I die a little inside every time someone talks about a chocolate martini. A tiramisu martini is no better. I bet they're both vodka-based drinks. Martinis are made with gin. There's nothing wrong with drinking chocolate syrup and vodka, but I wish someone would come up with another name for them.

I'm so jealous - I could use a little cruise in the sun time myself right now...enjoy it!

At the risk of appearing anti-semitic? Did you know she was Jewish or did you just assume that she was because she seemed annoying to you?

And all people from Asia are quiet polite and efficient? Interesting.

How WOndeful that crusing is affordable now for even the middle class to become snobby a-holes !!!! smiling just doesn't work for everyone , somedays it just doesn't seem natural.