It had to be a jag

Whew. Had a bit of a scare yesterday when I received a notice from the car rental company asking how I planned to take care of the damaged rental vehicle. I sure am glad I took pictures and video of the rental car showing the non-existent damage to the vehicle, a little Kia Rio. It turns out since the other party (she a government worker, he a minister) called the rental car company to report the incident, the wheels were set into motion for this. For a second there, I thought I was going to be on the hook for more than the $700 I already paid to the other party. Yeah, they wouldn't go for the "mobile repair" service I had found who gave me a $350 estimate based on the picture of the damage to their bumper. Here, I can blur the license now so you can see how freaking minor it was. Can you even see the scratch? It's that little dot in the middle. 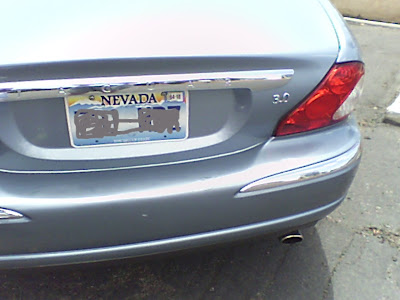 No, see, they insisted on having the dealer (I know) fix it and insisted on having a three day rental car to boot. The reason why they wouldn't hear of the mobile service is because they didn't want it worked on at their workplace and the rules of their gated mansion filled community (I know) prohibited such things. I whined how it was two weeks salary for me but they wouldn't budge. Actually, I liked their excuse because it made sense. I just didn't like having to pay an extra three fifty because of it.
Posted by tornwordo at 6:37 AM

A minister and he couldn't get the car worked on in the church lot? Pft.

Which just confirms my opinion that people who drive jags and live in gated McMansion communities are assbeagles.

That's kind of a cheap car for someone who lives in a gated mansion community, I bet it's a condo complex. Same rules though. I wouldn't bother if some Canadian tourist backed into my car doing such minor damage but I'm not that anal about cars, some people are. I had an incident where I totalled a rental car (not my fault) but the other guy said it was to his rental car company. Yeah, both rentals. He even got a citation for failure to yeild. It took months to straighten it all out. Ever since, I've made sure that my own auto insurance covers me driving any rental car anywhere! I seriously thought for a while that I was going to be on the hook for a Lincoln Towncar that I'd never be able to drive. Big relief when that was all over.

"Nevada" on the plate frame?? Don't you get it? They hit the jackpot. What ever happened to "forgiveness is divine"? They propably lease the car and have to return it next year with low mileage and no scratches.

A gov't worker and a minister can afford to live in a gated community of mansions and drive a Jaguar? I think a little investigation is in order. Could it be that Mr. Minister has his hand in the collection basket? Sounds like there's a Holy Crime going on there. Perhaps a phone call to their local newspaper or TV News station expressing some suspicion is in order.

Apparently no vows of poverty for them.

I'm sure the evil jesus will take this under advisment when they come knocking on the pearly gates , asswipes both of them !!

I totally feel your pain, and deep down I suspect this was a cash grab. However, if it makes you feel any better, I've been told that bumpers are only meant to take one hit. SO, no matter how minor the damage appears, it should be replaced. I'm not a car guy, so perhaps an expert can refute or validate this. Also, this low-end Jag in combo with the minister thing just screams "inappropriate touching" to me, but that's a different problem.

I remember when bumpers could actually be bumped...

I just got caught up on all your goings on and I'm sad to see I missed your birthday! I did manage to have several drinks, so let's just say I had one in your honor. :o)

Spain?! Hon, you're traveling so much this year!

The stereo/iPod dock? You will super love it! Put it on Shuffle and party all night.

And if you met me, I'd be the freakishly short one so we'd be even.

I had a somewhat similar situation a few years back when a multi-car pile up occurred in front of me. I screached to a stop but the license plate screw made a tiny indention on the bumper of the car in front of me. Rather than seeing the tiny indention as 'not worth fixing' like I did, it cost me nearly $400. to "repair" their bumper.

I feel your pain. I did the same damned thing to a BMW (or was it a Mercedes?) with the front bumper of my F-150. Just a tiny scratch, and they "had" to replace the whole damned bumper. Grrrr.