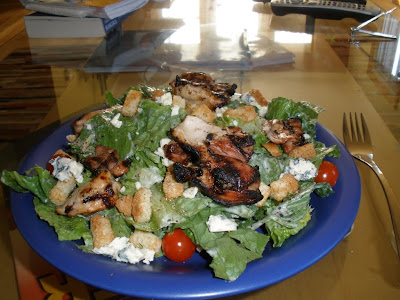 Well I'm just about finished up with my level zero guy except he added another 30 hours to the contract. That's good news since I have no other work at the moment. It's starting to look really sketchy with the contracts too this session. I've got an interview today at another college but the job is also contractual and because of the nature of the hours would preclude me from taking other contracts except the more flexible low (like half) paying ones. A dilemma. I hate to close the door on some of my long time contracters but somehow I'm going to have to put food on the table. Although I'm wont to panic when I'm insecure about income, I'm trying the little mantra "everything will work out". Because from all experience, it usually does.

Anyway, my student is starting to say some things spontaneously with the verb "be". Finally. Although it was kind of disheartening yesterday when he asked me what "and" was again. The good news for him is that he is getting approved for a thousand hour immersion program somewhere else. His more realistic goal of being able to join that progam without being totally lost is what I'm working on for the next two weeks.

Wow, this is really exciting stuff huh? There's also the exciting business of health ailments. Not mine, but spouse's. He's got a terrible ear infection and the antibiotics he was prescribed last Friday haven't helped. He didn't like that doctor though so he tried to find another. Unfortunately, there aren't enough family doctors for everyone to have one (yet) so if you're young and healthy like we are, you have to use the walk-in system. This can mean long waiting times, but not always. Last time I went, I got in in 20 minutes. It's because the doctors are paid less here and the US bleeds a lot of the doctors away. I don't know if that means the US has the best and brightest doctors though, it sounds more like they've got the greedy ones. What do I know though, I'm just a language teacher.
Posted by tornwordo at 6:39 AM

Congrats on the progress with your student. And good luck with the teaching gigs for the fall. Sounds tricky.

Your din-din looks so good I could eat it twice.

Hugs to Serge. I used to get ear infections as a kid and they are not fun. I hope the antibiotics kick in soon.

Dinner looks fabulous. I have this same thing at least once a week and it's on the menu for tonight. I love the huge chunks of blue (bleu?) cheese. YUM.

There are a few doctors I'd like to send back over to you..... Nice dinner.

With a salsd that nice who would notice clippers.

Are they strictly for toes or can you use them for fingers?

Heat from a low blowing hairdryer will help ease the discomfort of an earache says this mom.

The US has the greedy ones, most definitely. Hopefully they get him sorted quickly - ouch!

In our house, David's the one who would have the freak out moment if he saw clippers on the table. I've eaten around far worse than that.

If you hadn't said anything I wouldn't have noticed the clippers at all. In fact I had to hunt a bit in the picture to find them.

Re: doctors in the US.

Maybe just the greedy ones from Canada.

Man, I so need to learn multiple languages. Maybe next summer. . .

Sorry to hear about Serge's super-infection.

I've had enough of doctors - and politicians - here who are on the take. Thi$ i$ the be$t health care $y$tem in the world - IF you are a doctor, politician, or in$urance company.

Your experience with the Canadian health system is what I fear about socialized health care.

More often than not ear infections are viral. If he takes a decongestant it will relieve pressure on his ear so it won't hurt or get damaged.

Dinner looks amazing -- what is it?