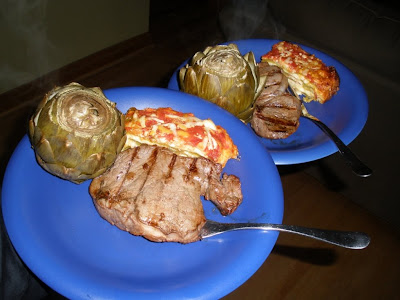 Ooh last night's dinner was good. Filet and artichokes with leftover chili relleno casserole. I suspect there will be excremental difficulties today, but it was worth it. That casserole is over half cheese and that tends to bind things up.

I was celebrating a bit with the filet mignon there. See at the beginning of the week I was getting panicky about not having enough work, depressed about pulling money out of savings and generally feeling all around cranky. By the end of the week I had scheduled more hours than I need between now and xmas. This session, it looks like I'm basically changing employers. I've been hired by two colleges to teach intensive courses. There will be some weeks that I'm in the classroom 36 hours but others with only 10 hours. And I'm teaching two night classes. This will put a chink in my routine since I'll finish up when I normally go to bed. I figure it'll be good for me getting out of my comfort zone. Anyway it's only 8 weeks. I will actually be making more money (about 5% more per hour) but receiving less since I'm now an employee and I have to participate in the teacher's pension fund. At least I won't have to pay taxes at the end of the year since they'll already have been paid.

Around home, we've noticed this summer that the vibrations from the big vehicles that pass in front of our house have been more vigorous than past years. It's like having a hundred small earthquakes a day. Irritating. Then last week I noticed that the puddle in front of our place never dries up. I went to check and sure enough there is water coming out of the sidewalk from what looks like a metal cap to some kind of pipe embedded there. Then I saw that a portion of our front yard and neighbor's is swampy. I don't know how long the leak has been going on but I suspect weeks or even months. It's hard to notice a permanent puddle when it rains every day like it has this year. So I called the city to tell them that there was water coming out of the sidewalk. Within 15 minutes a water emergency vehicle pulled up. The guy inside didn't get out of the truck and spent about a minute before taking off. Apparently not an emergency. That was last Sunday. On Wednesday, another city worker came, tried to turn off the leak but couldn't and then drew a big square in blue marker all around the spot. Then he left and it continues to leak. I think this is why the vibrations are so bad, the soil all around is saturated and conducive to passing on vibrations. I just hope all this vibrating doesn't harm our delicate foundation.

We're still looking for a tenant for downstairs. We hadn't been getting very many calls and I checked my ads and realized I had posted the ad in the San Francisco classified section instead of Montreal. Doh! That would explain it.

Rainy weekend here. Lots of puttering to do. Have a good one peeps!
Posted by tornwordo at 6:50 AM

About the ad, not the foundation. Yikes. I hope it gets cleared up soon.

You will probably have to keep after the city to get that repaired before it does become an emergency. Yikes.

That you had any calls at all on your ad puzzles me. Did people from Montreal read the SF ads and respond? That's amazing.

I imagine all the rain this summer hasn't helped, either, though I think you managed to stay a bit drier than we were. Hopefully it gets resolved before you get seepage issues.

The fact that a city worker marked the spot means that they'll show up eventually to work on it. Remains to be seen if they do it this year or next summer.

Congrats on the new employment load. Always have faith in your abilities and try to sustain the idea that things always work out. Fear of lack begets lack. Faith in plenty always pays off.

The water thing is a drag. I hope it is fixed soon.

That's great that you picked up all those unexpected hours.

I can't wait to hear all your "traveling when I should be sleeping" stories this fall!

I hate to say this for fear of jinxing the weather gods, but we've had no rain this summer. Everything has been so dead and dry, it's sad. And today is supposed to be hot. The sun is giving us weird light, orangy bright.

Oh, and let's hope that the leak is on the city's side of the property line and not yours. $$

We had a leak at the water meter once, but on OUR side of it. The bill that month was over $1000!! Hope they fix the leak soon. That's a pain. If they don't fix it before winter, will the whole thing freeze solid?

Congrats on the work for fall. You said everything would work out, and you were right.

San Fran instead of Montreal - oy!!

I sure hope that didn't cost you a lot of dough!!

congrats on the work thing working out!

You do like your artichokes, don't you. That's one food I never really acquired a taste for.

Since I am mildly lactose intolerant, dairy never binds me up, in fact I have to worry about the opposite reaction if I have too much.

I would think that the wet soil would mute the vibrations, as there is more "give." But then, I'm rusty on my physics, so who knows.

we could use some rain. There are several fires burning in the L.A. area. It's that time of year.

Glad to hear about the extra work.

Best wishes with that, the water department...and the post-"cheesal" issues. I hope it all works out...

Perhaps the vibrations finally vicitmized a water line and it broke. I'm hoping that your muncipal utility folks are better and more responsive than most.
I much preferred jobs for which the employer took out the taxes as I worked. It was much more painful for me to part with all that money at once than it was to slowly bleed it away. ;)

So were any of the city workers cute?

Congrats on having the work set up. Takes a load off I bet.

Hope that that leak gets taken care of soon. Good investigative work!

Something I like about your blog is that you guys often seem really content. You notice the small things in life and come across as pretty satisfied. I like it.

Hope the cheese stuff worked out. :>

Good luck with the water leak and the apt.