I think we're officially an old married couple. It was gay pride yesterday (even though they kind of have two pride events spaced two weeks apart) and instead of going down to view the parade, we stayed home in air conditioned comfort. I checked in on the live feed a few times only to see the same tired dance floats and drag queens and more importantly, the sweating hordes of spectators. Hot plus crowded plus pricey drinks equals stay home. Another pleasure in life, like Christmas, has been dulled through the tried and true method of repetition. It's like every joy experienced is on a kind of pendulum with each subsequent swing's force slightly diminished, until finally, the pendulum swings no more. This reminds me that we didn't even dance once on the last cruise we went on. Old.

I have been getting in inordinate amount of pleasure from the pink gladiolas I bought. I feel like they are shouting, "Hey, over here, check out our pink festoonage," every time I come into that room. Plus they were only 7 bucks for 10 stems. Such a deal. 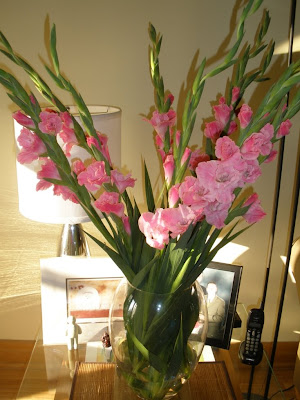 Did y'all see Em's comment yesterday? She doesn't understand why people are letting themselves believe the blatant lies that are being told, why people are not outraged that the public option is being taken off the table. She gave phone numbers and stuff too, so if you believe in actually changing the system, have a look and contact your congressman/woman.

Serge and I went out for breakfast yesterday to our fave little bistro to have the bagel au trou, which is a bagel with an egg fried in each hole of each half of the bagel and then topped with spinach cream cheese. It wasn't as delicious as the very first time I've had it, but the pleasure deterioration has been quite minimal. Damn good. It is such a laid back place too. I couldn't believe the waiter was wearing flip-flops. Flip flops! Maybe at a beach bar, but not in a restaurant with glassware and other sundry hot and sharp objects. The folly. Or maybe I'm just old and crotchety.
Posted by tornwordo at 5:54 AM

Lovely flowers. I bought a bouquet of lilies the other day for a similar price. Fresh cut flowers does wonders for the home.

I agree with your gay pride sentiment. Sometimes it's just over done. You've seen one; you've seen them all.

My theory on aging is that we have tried so many things and discarded them because we have found what we like. That narrows our preferences down as we get older. I think the secret is to continue to discover new things. You have a real sense of playfulness and curiosity that should provide you with all kinds of new experiences to replace the repetitiveness of tradition. To look forward to Christmas, do something new each year while holding on to the traditions that keep it "Christmas."

"I think we're officially an old married couple." I read that and couldn't stop laughing. I am so totally with you on that.

Ack the old married thing. This year Pride is in Oct, on Halloween weekend, so maybe that'll make it new and interesting. It won't be as hot, that's for sure. Pride in Atlanta in June is brutal.

I think Pride has become less interesting in relation to the number of corporate sponsors it has acquired.

The flowers are beautiful!

B'fast sounds yummy. I love me a good bagel and now I want to try this at home.

The glads are BEAUTIFUL!

I don't know. I'm the same age as you guys and I still like trying out new things.

And I love the gay pride parade. And yes, every year I complain that it's a little lame.

Maybe this year forces won't conspire against me and I'll sponsor a marriage equality float.

Because I think we're not going to see equality in RI for another year.

If you pinch the tips off the tops of the glads, the flowers will blown all the way to the top. Just a tip I learned when I had a flower shop. And hanging out with all these young kids has done wonders for me not feeling old or crotchety! A certain on in particular!

I'm going to look for opportunities to use "festoonage."

Despite the heat, I'm still sorry I won't be able to check out Carnival Parade in Provincetown tomorrow...but I _will_ be at work in the AC, so at least there's that.

I go to Pride every year. I consider it as much as a duty as a recreational activity. And I still find ways to enjoy it.

I did not see Em's comment and will get on that right away.