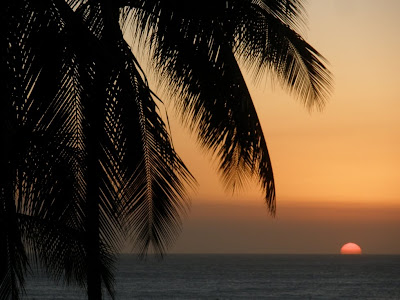 We made it back home after a very long journey involving three planes and 5 time zones. I toughed it out yesterday and stayed up until 7 and then popped a couple melatonin to reset my internal clock and slept 11 hours. I had been up for 30 hours straight, and this after having drunk like a fiend and sleeping only 4 hours on our last night. Oh my oh my that last night, so much booze and sex. We started out by going to the top of the hotel with the revolving rooftop restaurant for a sunset cocktail (or was it two?) before going to Nobu Waikiki for the chef's tasting menu. ($110 each but if you ever get a chance, it's exquisite. Get this mom, the "amuse bouche" was toro tartare.) The waitress suggested the house label wine "Nobu Chardonnay" and that was the first (and last) time I've ever ordered a wine without knowing the price. Later, when Serge ordered a second bottle, there was momentary discord since we've never had two bottles with dinner before (and we were already severely in our cups). Still we finished it and when the bill came there was another momentary discordancy, but what the hell it was our last night in paradise. The wine was seventy bucks apiece. Then we made our way to a little hole in the wall gay karaoke bar where they had a guy giving chair massages (you sat in a special chair while he massaged). We each had one, sang songs (shudder) and really did up that last night. There was a guy's email in my wallet the next day (he wanted a copy of the pics we took) but it wasn't until I reviewed the camera that I could remember who that was. Yes, we were seriously polluted. So then we had to deal with the aftermath of that while traveling home. I don't recommend this formula of traveling, especially when red eye flights are involved.

The best part of the whole day yesterday was picking up Georgie and how he howled (cried?) when he recognized us. He was so happy to come home although the kennel guy said he loved it there and stole everyone's heart. We already knew this about him, that he loves everyone and everything and this makes him compatible with most living things. Anyway, he fell right back into his routine back home. He's still sleeping as I type which is how he hangs. He loves to sleep in.

Serge has been posting pics on facebook along the way, but if you're not his friend you can't see them. I'm not in control of who he friends and doesn't so I'm going to have to put up a few pics later for you (Probably Saturday). For now, here we are on the last night before heading out.

Update: Slideshow here.
Posted by tornwordo at 6:56 AM

I am so happy you're both home! Arroooooo!

Glad you made it home. Can't wait to see some pics.

Loved getting to share vicariously in your Winter escape. One thing that makes coming home from paradise easier is having a happy dog to greet you. Sigh... Can't wait to see the photos, whatever I get to see, either here or on FB... why DO we have to earn money? I have so many things to do, I really can't be bothered. Again, sigh...
Glad you had a good time, even if the bacchanal of the final night made the flight home painful. You never said how the increased security was; did either of you end up getting patted down by a cute security guard?

Sounds like you boys had better get back to work to pay for the expensive wine! Welcome back to Paradise.

Oh, how I loved Georgie's welcoming back of you.

Of course, I'd love to know what songs you both sang during karaoke, but something tells me

I love that Georgie was so excited to see you.

Glad you had a great time. I almost barfed from memory alone of those kinds of nights. I'm impressed that you could travel after that. I can hardly walk.

I'm happy you made it home safely.

Aww. The Georgie part is touching.

I'm looking forward to seeing more photos of your holiday. You and Serge look beautiful together!

I know how my princess reacts after I'm gone for 15 minutes. I can imagine Georgie's delight at seeing you again!

Welcome home, guys! The pictures are great. Serge has some seriously beautiful eyes. The gorgeous trees and landscapes, the open lobby, and the boat drinks just make me want to visit Hawaii even more. Thanks for taking us along. Now get some sleep.

Yay you are back, I love reading your blog so much, I stumbled over it a couple of months ago and have found it an amazing source of entertainment, mine of information and the cute guys just make it better.
I always worry that the blogger(you) will decide it's time to call it a day and I will have to find somewhere else to lurk, LOL.
Off to peek at your photos and forget cold rainy England out the window.
Nick

Sounds like quite a night. Welcome back to reality.

user is used to seeing the comment form and filling out information in general. Filling out the name and email wont take me much time, and if you really wanted to go ahead and type the comment first, you can do so, not really that big of a work around. I’m .
study abroad