It was a pretty lackluster weekend. Serge and I don't observe Valentine's day, not that either of us dislikes flowers, candy or lovin', it's just that it's such a made-up day for the purpose of selling those items. So we don't buy them. Still being rebels in our forties I guess. I wonder when we're gonna really grow up. We did get some work done though and I started on the taxes. I have the privelege of doing the tax return for two countries. One country, we are married, and the other country I have to file single, since my marriage doesn't count there. So charming to be reminded of that each year. Up here, there is no distinction between hetero or homo, married or common law spouse. If you make a home together, you file together.

Georgie got a couple good afternoons at the doggie park. It's so amazing how much energy he has there when all he seems to do around the house is blob around. That's not true actually, he does spend a fair amount of time out on the patio, but I think it's more for observing the neighborhood happenings. At home sometimes he reminds me of a teddy bear sitting stoic on the couch or bed. He does this new thing lately where he comes in the shower to look at you while you're showering and then he licks the water off the side of the tub, the tile, and the shower curtain too. At first I thought he was going to come all the way in, but he never does.

Sunday was hard because I ate too much Saturday night and had indigestion dreams all night. I got up around 4 to start the cavalcade of bowel movements that ensued. Here's a pic. 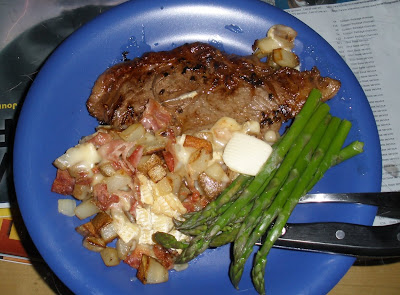 I think it's the tartiflette that did it. (Fried potatoes, 0nions, bacon and ton of cheese) I know it can't be right but I weighed 4 pounds heavier than Saturday when I weighed myself Sunday morning. But maybe it is right, I'm fairly sure I expelled a similar quantity of matter yesterday.

I'm off on a new group intensive this week. I thought it would slow down after that, but things are shaping up to be pretty full until the end of March. AND, I've had a few inquiries for lessons from my business, including one from a long ago contract. And of course we must not forget, Spain in less than a month! I have to practice my Spanish. Have a swell Monday.

So where in Spain are you going? I haven't been back for a visit since '92 and miss it horribly.

Hey, at least YOU can get married in one country. I can't even do that!

...and do not make fun of the 'blob' factor. I based my whole blog around it.

"I got up around 4 to start the cavalcade of bowel movements that ensued. Here's a pic." I thought we were gonna get to see your BM!

Yeah, I had that same split-second of dread before the pic, too.

Canada seems to be so grown up about so many things, marriage among them. Imagine being allowed to determine for yourself whether you consider yourself married.

I had to laugh about the cavalcade of bowel movements.

As to Georgie, he will step in at some point. For reference my experience is with a cat, and that cat would actually step in the shower with me.

Indigestion dreams are the worst!

Although married and common-law couples are treated as nearly-identical situations for income tax purposes, this leads many people in common-law relationships living in Quebec to assume they have the same rights and privileges as married couples in other legal matters, which is not necessarily true. In lieu of a proper will (and even then), it seems that being married is still the best way to ensure fair treatment in case a partner dies or leaves.

That asparagus is making my mouth water.

I wish I could have a calvalcade of poop. I'm a one shot pony. I think hormones are slowing me down.

Thank you for not sharing the pic of your bowel movement. Good Lord!

Good that your system is so efficient at evacuation. Zoe (Carl's dog) is like Georgie in that she is quiet at home, but man, she runs like crazy in the dog park. We live five minutes from one so it's great.

Good for you for bucking corporate-created holidays. Of course, I would totally sign on board if Maker's Mark wanted to sponsor GayProf Day.

Rick beat me to it. "I got up around 4 to start the cavalcade of bowel movements that ensued. Here's a pic." Man, I was afraid to look.

Our Callie prefers to lick the shower stall than to drink from her bowl. Outdoor puddle water is even better. I should bottle the stuff and sell it to American dog owners.

I'm sure you enjoyed it and I'm sure it is a popular dish, but the tartiflette just sounds a-w-f-u-l to me. I think my bowels would revolt against me, too.

"I got up around 4 to start the cavalcade of bowel movements that ensued. Here's a pic."

I thought you were going to show something much more graphic.