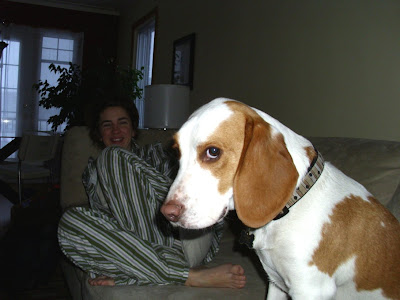 Good morning Georgie. Did you pester our overnight guest all night? Did you insist on sleeping with her, nay on her all night? You know we don't mind, but non-dog owners might have some issues with that. You need to sleep with your daddies. 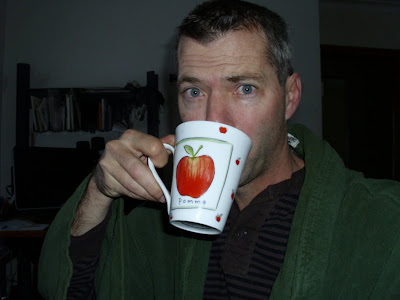 Must have coffee. And yes I did sleep in my shirt. Lately I've been sleeping with the last layer of everything. Socks, long underwear and undershirt. It's cozy and warm that way. Serge used to not let me have socks in bed at any time but he's mellowed as he's gotten older. 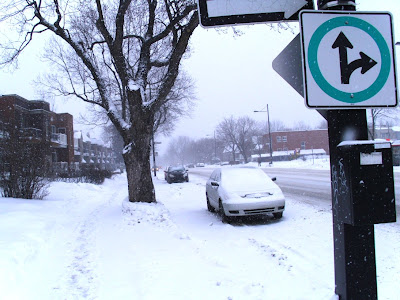 It was a snowy morning, but Georgie needed to go out and do his business. Even though our street is one of the major streets of this city, weekend mornings are very quiet. Our street leads right downtown but there's no rush hour per se on the weekends. 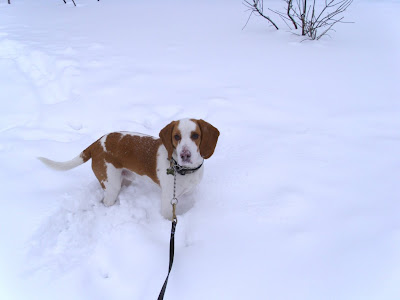 Georgie so loves the snow. His yin is the perfect antidote to my yang on the matter. As much as I'm coming to loathe it, he always makes me smile diving around in it. 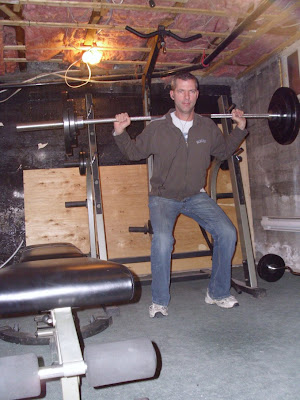 Weekends are workout days. And so I did my shift in the basement. I feel all manly looking at this shot. The bar is so heavy it's bending. There's 72.5 pounds on each side plus the olympic bar which I think is 35 pounds. So squatting 180. Ooga booga. 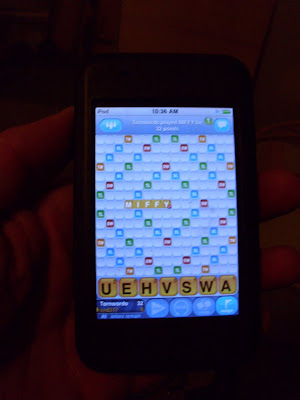 All through the day yesterday, I played words with friends on the ipod touch. I can only do that when there is a wi-fi connection as there is at home. Usually, I just play my turn when I'm (ahem) doing my morning duties. If you'd like to play, start up a game with me. I'm tornwordo. 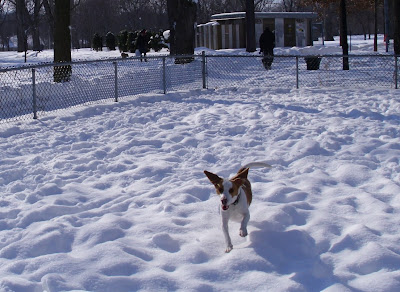 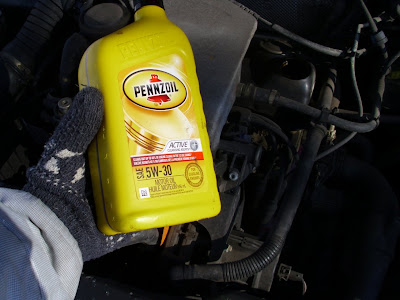 It's been on my list for two weeks and I finally got around to it. I audibly gasped when the cashier rang it up and it came to over $6. I remember getting a quart of oil for a dollar not so long ago. But maybe I'm dating myself. How much is a quart of oil in your neck of the woods? 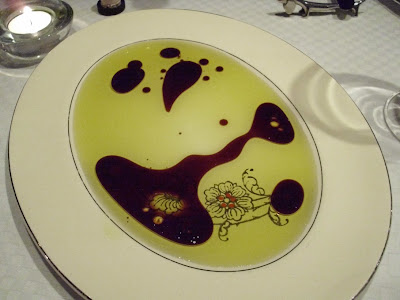 We went over to Dan's house for supper (Dan forbids photos of him posted) with our overnight guest Ida. Ida came to town (she lives in the sticks) for a one day seminar and when she was done, we went over to Dan's. We brought over coquille st-jacques, and incidentally, the Choix du President brand is the best! chock ful of seafood and the sauce is unctuous (is that a word in English?) and divine. This picture is of course the oil and vinegar for bread dipping. I thought it looked like abstract art. 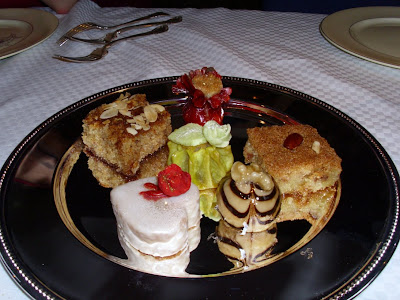 Dessert was prettier than it was tasty. But I've found that to be true of most "pretty" desserts. Chocolate mousse looks like a mound of doo-doo, but it's delicious. Ditto for souflees. The more gussied up the dessert, the more conflicting the flavors. These had lots of marzipan and coconut figuring into the mix. For me, if you put coconut in it, you've ruined it. 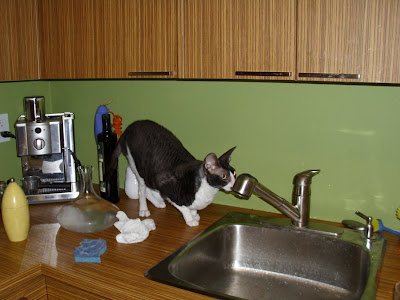 Dan's cat Emile. He was crawling all over the place and we were a bit taken aback when he was jumping up on the counter while dinner was being prepared. Dan said it's the one animal he's ever lost the war with. Thank god Georgie cannot jump up on the counter, because if he could.... 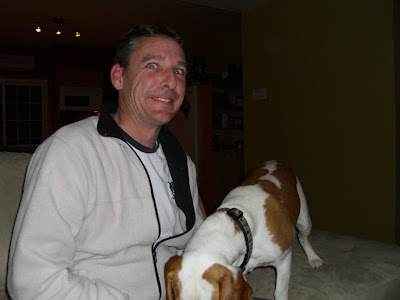 Back home, Serge took Georgie out for his evening poo/walk. When he got back he tortured Georgie by hiding his cookie. He didn't hide it there, but Georgie just wanted to make sure.

There you have it. Chad isn't sponsoring this anymore, so I can't direct you to others who have done a photo spread of the day. Update! He is sponsoring it for one more year. You can see other photo spreads here. I like doing it once a month because it gives an objective and a creative edge to the day. I hope you liked this one. Cheers!
Posted by tornwordo at 7:42 AM

Chad kind of is sponsoring it. You can go to his linky tools, but you also have to go there to see the other participants - they don't show up on his page.

Good photos. Love that Georgie ran and ran (repeat). He looks so guilty in that first pic.

I absolutely cannot wear socks when I'm sleeping. In fact, the most I can usually stand is undies and, when it's really cold, a snug-fitting t-shirt. When I sleep at work, of course, I also wear gym shorts, but never, ever socks.

My verification "word" is "squended". If I weren't so tired, I'd try to come up with a meaning for "to squend".

What a fun time. I feel like I was there with you. You do realize I adore Georgie. My cats are just like Emile; always putting their noses in everything. Cats know...they just KNOW!

Thanks for the guilt trip! I am supposed to do squats on a regular basis.....guess I better but I think I'll start just a tad lighter than you....like the weight of the bar!lol
Georgie looks like he had a blast in the park....I tell ya, a calendar would be wonderful just on Georgie.
My word verification was 'tedicat'.Appropriate I'd say.

And Georgie can keep me company all night long any time he wants.

The doggie park in Park LaFontaine looks so clean and white. No doggie doo anywhere. Perhaps Georgie had a small feast before you took the pic? ROFL

And Emile the cat - luckily my Angie isn't a counter cat. Instead she's a cat who when she needs to vomit comes up next to me and lets fly.

Unctuous is a word in english but it means having a greasy or soapy feel so maybe not the right one.
My spouse sleeps wearing only bedsocks as his feet get cold when they escape from the end of the duvet, me, wrapped up from neck to toenails since our house is cold.
I love that first Geogie pic, he looks so sorry about his behaviour.

my hangups are mayo and miracle whip - ew ew ew!

In that first pic, I think Georgie totally knows. Like most dogs, he gets extra happiness from snuggling with the non-dog owning peeps.

The best desserts are the ones that old ladies make, they're usually chock full of sugar and look great too!

My cat can't get up on the counter, but he does get up on the table. Drives me nuts. I'm forever running around with antibacterial wipes.

I don't know how much oil is but if you want to gasp, go to Costco and buy enough synthetic oil to fill a truck. That'll bring some shit to your shorts!

One can train a cat not to jump on the counters. It involves sticky tape. I'm not sayin', I'm just sayin'.

Thank goodness Indi can't jump up on the counters but she has shown countless times that she is able to lick anything within a four-inch border along the edge of the countertop.

You're even stronger than you think, TW. Olympic bars are 45 lbs.

Those desserts look wonderful. So naturally they taste like crap.

Words sounds fun. Love Scrabble but they won't publish a version for Droid. Does it play in real time with others? Does it have a CPU opponent?

Adorable doggy shots and some yummy food. That's all I need in a post! Now stop bitching about the snow, and follow Georgie's lead. It's Canadia, after all!

Georgie looks like he was up to no good in that first pic.

Squats are supposedly the single best exercise one can do bcs it works the largest muscle in the body, the thighs, so it burns a LOT of calories with each rep.

Great shots. I love this 12/12 concept. One of these months I shall do.

You know, my Words friend...I keep my Ipod at my bedside because I play games before I go to sleep. The other morning I heard the familiar Words chime around 7-730 AM and I thought to myself "Torn is taking a dump" lol

CoffeeDog made me laugh. Hard.

What a bummer... those desserts DO look so yummy.

Love the Georgie photos - his boundless energy running in the doggie park, the look on his face in the first photo... I'd let him snuggle up, I bet he'd keep a person warm!

Love the snow photos too!

Sorry I’m a bit late commenting – here at last (and my own 12 posted too). Just a busy time!