Not hearting the snow

Ugh. The storm track has moved back our way. First the 10 inches on Wednesday, then this morning there is another 6 inches on the ground even though they were only calling for 2 to 4 last night. They have been really bad about getting the quantity predictions right this winter. And tonight and tomorrow they are calling for another 4 inches. So what, does that mean 8? If human beings had evolved in the north instead of in Africa, our arms would probably resemble shovels.

One bright side to the incessant snow is that the city has to ramp up the snow removal operations. Although they have to start over today, during the snow removal operations if you don't move your car when you are supposed to (they put up signage with times) they tow the car to a nearby spot and ticket it. Well, if the van is still in this city and it's abandoned on some street somewhere, we'll be able to find it because the police will ticket it and find it has been reported stolen and call us. So far that hasn't happened but they didn't finish the operation from Wednesday's storm. So. Fingers crossed. 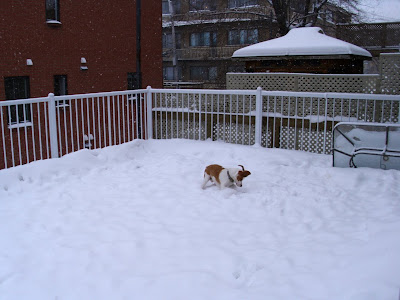 Georgie sure loves it. It seems that most of the dogs do. At the doggie park yesterday, all the dogs seemed more frolicky than usual. Georgie has been better at the doggie park. It must have been that particular mix of dogs that caused him to misbehave last week. Although he is still more vocal, he's just being a regular ole dog.

I'm so burnt out from the last three week's intensives. I have a break this week and only have to work two days. The other days I'll be prepping for the new course I picked up. And daydreaming about warmer climes. We do have something to look forward to though. The parental units have decided to take the family to Europe in October for two weeks. Yahoo! That is sure going to be a blast.

This is dull I admit so I'll let you go. I must do some shoveling now. Oh goodie gumdrops.
Posted by tornwordo at 7:06 AM

You work too hard.

I wish I had your parental units.

Meanwhile it was 25 degrees C in SFO yesterday. Weatherpocalypse!

Oh, I wish we could all see the world through a dog's eyes. Georgie must be having a wonderful time. On the other end of the spectrum, when I take my dogs outside, they give me that 'fish-eye' look. You know the one, where they cock their head at you as if to say, 'are you kidding me? You want me to walk in THAT?!'

Dachshunds...ugh! You know the Germans, they're neat, but yet SO stubborn.

The storm MISSED us last night.....we had a 'rain event' instead!
Sophie would have a blast with Georgie chasing each other through the snow.
I will DEFINITELY run this all by MY parental unit!!!

Remember in Rocky 4 when Rocky went back to basics and trained in Russia and got big and strong from shoveling snow and chopping wood? That's what I think of to get through the shoveling.

Get thee a snow removal machine! Seriously! You could blow that snow right off your deck and start having cocktail parties way before everyone else in the spring.

Yesterday they predicted one inch of snow. We got five. I so hate the shoveling.

You know how twos come in threes? Well, last night's was the third significant snowfall of the winter here in Montreal and, like the previous two, they underestimated the expected amount. So, for the rest of this winter, I'm going to assume that significantly more is coming than what is being predicted.

It could be worse, I suppose. My mom sent me pictures after Wednesday's storm in Moncton, and they were supposed to get 6 to 10 inches overnight last night and today. Based on how things looked as of last Thursday, heaven knows where they'll put that extra white stuff!

"If human beings had evolved in the north instead of in Africa, our arms would probably resemble shovels." Definitely the coolest thing I read all week.

We're snow exhausted down in Boston, too. But having grown up outside Rochester, NY, i've got snow in my blood. And i think it's my capricorn tendencies that actually allow me to like snow shoveling. You know, getting down to bare pavement making nice, crisp paths in the snow.

Hope you can see the snow through Georgie's eyes...he looks like he's having a ball!

Ugh, shoveling snow has to be the most despicable thing in the world! It is days like these I regret coming to Canada instead of going to South Africa, which was my alternative plan back in the day... I feel your pain, quite literally. Still, only six weeks or so until St. Patrick's Day, so spring can't be that far away

The only thing Tuck likes about the snow is running back inside to get away from it. Personally, I just accept it as a fact of winter.

Cool idea about the van being ticketed. I hope they find it and stick the theives with a hefty punishment.

Europe in the fall should be enough to get you through anything, right? I'm uber jealous.

Always love the snow pics. I'll never see any, so I appreciate it.

Damn, I would love some snow over here in Maui. We are blazing hot today....going to the beach to cool off. Yup.

Your dog is adorable.