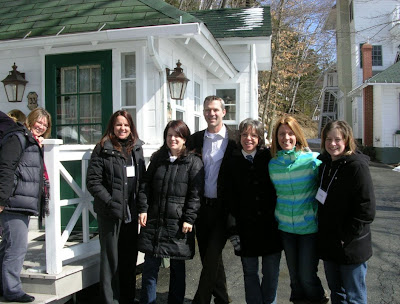 We had such fun this weekend. I spent the weekend with 23 women and barring about 7 hours for sleeping, we were together the entire time. The best part was the incredible food that we had at our five star hotel. I would really like to visit again in the summer with Serge. I don't know if we could afford that though. My job was sort of like activities director and we played games and I gave prizes on the bus and in the evening. One of the ladies kept saying it was the best weekend of her life. How can you not smile when someone reconnects with that childhood wonder. It still lives in all of us, but if you're like me, it doesn't make an appearance all that often any more. 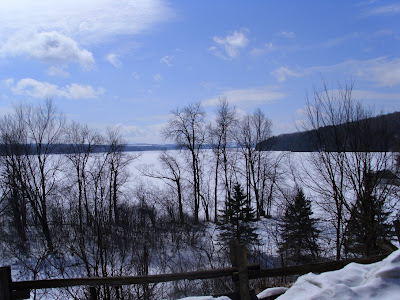 This was the view from my veranda. As you can see, winter is still firmly in control out there, but the temperature was in the forties, so it was pleasant for the two mini walks we managed to squeeze in. That lake was still frozen and I wanted to walk on it but since it's spring everyone advised against that. I threw big stones up in the air and they didn't pierce the ice but I didn't try it anyway. Too scared. Lots of people saw deer down at the lake. Sadly, I only saw the tracks. 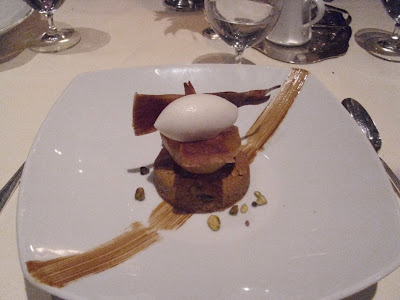 As I said, the food was phenomenal. This dessert was pretty good but I couldn't resist making skid mark jokes at the table. When will my inner teenager die? Perhaps when I do. The only complaint I might have would have been the time it took to have dinner. Granted there were five courses and 25 of us, but 3 hours and 45 minutes was a bit long. I felt like I do on a long flight. The menu was very upscale and even I didn't know what some of the things were. Turns out I adore pureed parsnips. 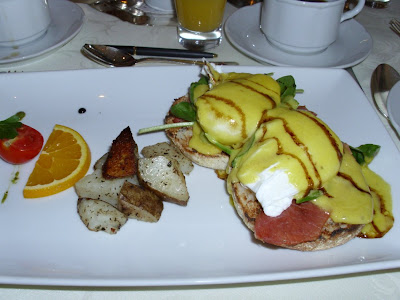 Even though it was your basic eggs benedict, it seemed like art to me. The eggs were amazing, I don't think I've seen such orange yolks before. They told me they were supplied by a local organic farmer and that they cost triple what supermarket eggs cost. I would definitely buy those eggs if I could. The service reminded me of when I worked at the Ritz-Carlton. We had the amuse bouche at dinner, the pre-dessert, the table crumbers, the gueridon service and I realized how much I don't miss being on that side of the dining experience. The waitstaff was so kiss ass, just like I used to be. It made me feel a little bit uncomfortable with them fussing around the table all the time. 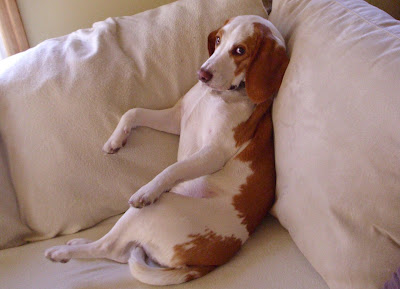 We can't have a proper post without our favorite pooch now, can we? He was so cute lying there on the couch like that. He sat there for several minutes like that so I got to take numerous pictures. I liked the look on his face in this one. Oh yeah, this reminds me, the camera is working again! I googled my camera model and "won't turn on" and I got the fix. It involved several steps of taking out the batteries and memory card, putting back the batteries but not the memory card, turn it on and take a picture on the internal memory, then take out the batteries again and replace them and the memory card. It didn't make any sense to me, but I did it and it worked! So now I can take pics again. By the way, thanks for all your kind words on the last post. I am grateful for them.
Posted by tornwordo at 4:56 PM

Glad you're back and that the weekend recharged your batteries!

The resort looks wonderful. Hope you can find a way to spend a weekend there with Serge (and maybe Georgie -- bet he'd have fun in those woods!).

Speaking of. . .all he needs is a martini and the remote and he'd look just like his dads.

Georgie's looking so demure in that photo.

The secret to really orange egg yolks is in the amount of yellow & red plant pigments in the chicken's diet. When I took livestock nutrition & feeding classes in undergrad, we had to calculate out how much yellow corn to put in rations to make sure pigment levels were adequate. If the egg yolks and chicken fat don't have the right amount of color, consumers won't buy them. When I was in India, every egg I ate had a yolk so pale it was almost cream-colored, because yolk color isn't a significant market determinant there.

You're right. I assumed the ON/OFF button issue had to do something with the hardware. The solution provided doesn't make much sense, but who cares since it's working now.

I thought of the SAME THING with the dessert "Who smeared poo on the plate?" Let's never change! :)

Georgie is so adorable, he makes me want to get another dog.

I probably would have "egged" you on with the skid mark jokes.

Torn, I love how you share the small things. It's an intimacy that few can do so well about what on the surface are just mundane events. That's what we keep coming back for. That—and Georgie. :)

What a good 'break' for you! Oh they could fuss over me all they want! Love being pampered!!
Georgie you have got to stop being so cute!!!

Looks like a wonderful place and great food - skid marks and all.

I love how there really is no original question to ask of the internet anymore. Someone else has already asked it and the answer is out there. Yay for self-help fixes!

Georgie looks quite comfy on his couch. I assume he still shares it with you?

I'm glad you didn't try the lake, I was nervous just reading about it.

What event brought you all together? Twenty three chicks and you. Be honest: did you switch for a night?

Man, you've got yourself one cute dog there!

Have you ever posted about your Ritz Carlton days? Love to read about that.