* Took the car in to get the oil changed and the summer tires put on. Of course they called back with things that needed fixing. So nine hundred dollars later we have new tires and a new muffler.

* They also informed us that the disks for the brakes were rusty. I said, "Really because it's you guys who installed them last year, 11,000 kilometers ago." The disks have a lifetime warranty but you have to pay the labor. Suddenly though, according to the mechanic, it wasn't a big deal if I didn't notice any braking problems. Why does capitalism so often equal ripping people off?

* I started the truck driver's course yesterday. They were sad that I wasn't a young 24 year old female. I didn't out myself though, they are at such a low level, they don't need to be distracted by such information.

* One funny thing came up though. Apparently, some trucks are equipped with (illegal) toilet holes so that on long hauls with a partner, you can plop down and squeeze one out. I was aghast. We laughed at the prospect of brown matter hitting the windshield of the poor hapless driver behind. And then we laughed some more at the thought of the windshield wipers smearing it all over. Can you imagine?

* It snowed yesterday. Also, ice pellets for a couple of hours. At least there wasn't much sticking going on. 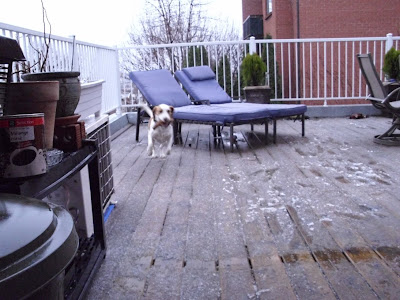 * Georgie got all excited though and tore around on the deck slipping and sliding all over the place. He's a blur in the shots I took.

* I keep waking up too early and missing that last cycle of sleep I need to feel good. Three days in a row now. Ugh.

* Finally did the taxes for Canada. And for the first time ever, I'm getting a refund. It'll just about pay for the tires and muffler.

* We started "Big Love". We're almost done with the first season. It has hooked us but there's something creepy about it. I feel sorry for the women. But I can't look away. I guess that's because it's good story-telling.

* I had this shot in my inbox this morning with the subject line "Life is Good." Serge must have got his photoshop on last night after I went to bed. 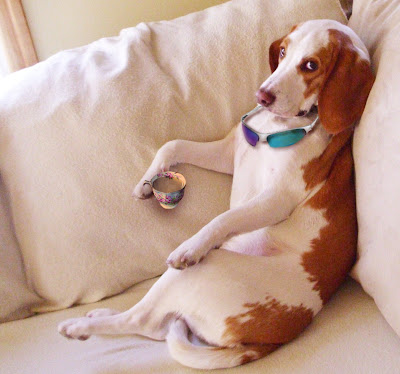 Posted by tornwordo at 7:56 AM

Love the photos, Georgie must think he is human.

Funny comment about the truck drivers, being at such a low level, I agree, why burden them LOL

Good catch on the brakes.

Oh also...Big Love. We LOVED that show and were so sorry to see it end. I think in the first season they make it a light and breezy, focusing on some of the shallow aspects of plural marriage. As the show goes on it gets darker and darker, and the women all grow and you feel less sorry for them.

I will be interested to see what you think as you progress through the series.

I seem to have missed out on the truck driving training - must go back and see what posts of yours I've missed. As ever, Georgie is adorable!

Your truck story left me speechless. Not an easy feat.
Georgie DOES have the life!

that georgie is one lucky dog! and so photogenic too!

So the toilet hole is like the really "lazy boy" recliner from The Simpsons, huh?

Georgie seems to love relaxing in that position. He's a cutie.

Hey there, Georgie Girl.....put your legs together.

Wait, did I miss something? You're going to be a trucker now?

Snowed here yesterday, too. Stuck around for half the day but melted soon thereafter. Still, it irked me no end.

The mechanic makes me bitter for what they tried to pull. Unless I loved them, I'd be moving on. Unethical much?

I could have gone all day without the poo story. Really, I could have.
:-)

That Georgie is quite a sketch. Adorable, too!

Leave it to humans to take Poo Flinging to a whole new level. Makes you think twice about having a convertible, doesn't it?