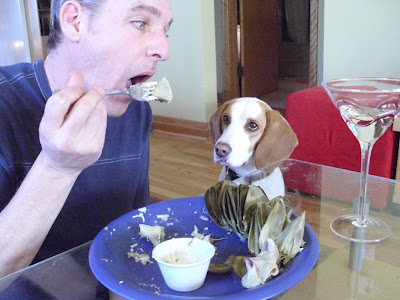 We've been eating a lot of artichokes lately. It may be my favorite vegetable although asparagus is a close contender. It just occurred to me that those are the two vegetables where it's perfectly acceptable manner-wise to eat with your hands. Maybe that's why I like them - a little tactile experience in addition to the taste and texture. Georgie usually sits next to Serge as he is more apt to give Georgie treats at the end of the meal. (I'm grinchier in that way, but on the other hand, I take Georgie to the doggie park which Serge never does.) Georgie follows the fork as it paces between the plate and the mouth. Often there are two strings of drool dangling from his maw in anticipation of possible morsels of wonderfulness.

I had my second class with the truckers. They're a good group of guys. The two "nuls" as we say up here didn't show up for the second class. They were probably intimidated by the general level of the others in the class or dissuaded by the 3 hour drive they have to make to come to class. Probably a little of both. We'll see if they show up next week. 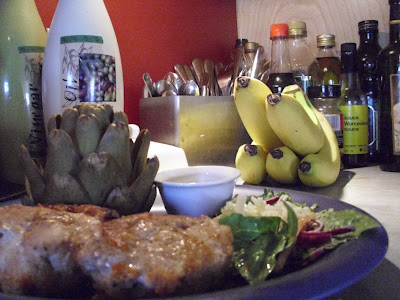 As I said, plethora o artichokes. I made an awesome osso bucco this week, a double batch so we had it two nights in a row. The bone marrow is so amazingly good, ranking right up there with foie gras for me, and SCORE, my husband doesn't eat it, so I get it ALL.

Well that's about it for now, there's lots of drama going on in our friend's lives, stuff I really shouldn't reveal here, but things are calm and undramatic chez nous. Here's wishing you likewise. Later~
Posted by tornwordo at 1:08 PM

Man oh man, I haven't had an artichoke in YEARS! Like, 25 years!

I love drama-free even more than I love artichokes and I'm crazy about those spiny things.

Makes me want to have an artichoke now. Glad all in the Torn household is calm.

look at georgie's "hound dog" look; he's trying to guilt you into giving him a treat!

Had stuffed artichokes this past weekend.

And lo and behold look at this display in the local supermarket:

Guilt, shmilt. That look on Georgie's face is the equivalent of "Did I say YOU could have that?!?"

Hope your friends' drama doesn't upset the applecart at Chez Sticky Crows. Remind them that anyone who sleeps on your sofa, whatever the reason, could be photographed while in an unflattering position with Georgie.

I too am the grinchier one when it comes to Bandit begging at the table. Chris is a sucker for the puppy dog eyes.

Glad to hear all is well.

Oh and can Georgie's ears BE any bigger?

'Guilty, your honour!' I too am the grinchier one as far as treats from the table for Sophie. Sometimes though I just can't resist THAT look they give us!

Artichokes.....will try them out, if I can get any around here. Asparagus, any day, everyday....love them!
Keep truckin'!

My husband is the soft touch around here, and all the animals seem to know this from the start. My daughter has moved back for a few weeks between moves and we are hosting her two cats. Both of them have latched on to the husband already. Me? I'm a piece of furniture, good for basic foundation as they move past.

Adorable picture of Serge and Georgie!!!

I love your blue plates. Always have. Artichokes remind me of Aloe plants, I half expect them to be full of that snot-like stuff.

My mother was one of the few in our Sacramento neighborhood in the '60s to serve artichokes, which is amazing in view of living only a couple hundreds miles away from the Artichoke Capital of the World.

Always thought they were a "fun" food to eat. Yeah, not much there, but tasty. I love them dipped in mayo!

I love artichokes, but I rarely prepare them. Maybe this post will inspire me when I go to the market later...

The concentration on Georgie's face: priceless!

I hate artichokes and asparagus. I hate all vegetable matter, except salsa

i love arti and aspar!!
how did you know i have DRAMA!?
it's only work drama, moderately boring and minorly juicy, call me....
xx
d

He use not to be a druler...now he is