Hey y'all, sorry but no Georgie pic to start off the post today. I hope he is doing well, and since there's been no news on the matter, I believe we can assume he is. We've been in San Francisco now for three days and have not stopped for a second.  But let's start with the flight out here. I was in the last row of the aircraft and the flight was FULL. About two hours before landing, there was an Asian lady and her daughter in line for the bathroom next to me. I smiled at the lady as her daughter had her head kind of buried into her mom's stomach. She didn't smile back. It didn't take long for me to realize why as a piquant odor reached my nose. The  young girtl had vomited and the mom was cupping much of it in her hands. The rest had tumbled onto the floor and to my horror, splashed upon my sock clad foot. Ugh! The flight attendants covered it with blankets and laid bags of coffee on the floor to camouflage the smell. In all honesty, I felt really bad for the little girl. Sick and embarassed, poor thing.

We arrived July 4th so it was a holiday. The weather was also nice and here in Dolores Park, the place was packed with beer drinking, pot smoking, bbq making people enjoying the day. There is a buck naked man lying face up in this picture. Can you spot him? We hung out with baby bro and bar hopped after getting an awesome burrito in the Mission district. The burrito was the size of a 2-liter coke bottle and I ate the whole thing. You just cannot get that in Montreal. Our hotel is awesomely located with a subway entrance literally steps from the front door. Plus there is a starbucks attached to the lobby and free wi-fi everywhere. I asked for two beds when we checked in and when she checked our reservation, she clucked, "Oh, you booked with Priceline, no two beds with Priceline." And then she made a few clicks on her keyboard and said, "room 557 two beds." So I slipped her a 20. They have rooms here with ONE double bed, so I was grateful. The hotel is from the turn of the (last) century and is very The Shining with wide high ceilinged hallways and ornate carvings all over the place. I dig it.

The next day we went over to the Exploratorium which is just behind the Palace of Fine Arts which is in the photo and a vestige of the Expo in 1915. We've been lucky with sunny days even though you really need a windbreaker as the chilly winds pick up in the afternoon. Serge and I spent 5 hours in the Exploratorium and we were both kids again. I just love that place.

Here's Serge playing with the giant bubble kit. We played with every single exhibit there which is why it took so long to get through it. Being a kid for a day was really fun. I highly recommend it. 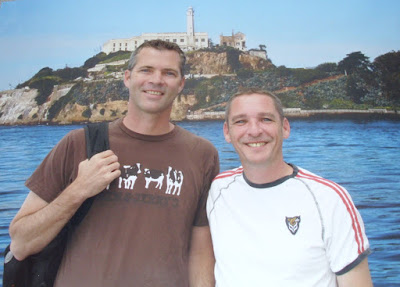 Yesterday, we took the tour of Alcatraz. We bought the photo they take of you before you board the ferry. This is a picture of that picture. It's rare we spring for such overpriced ($22 for 2 5x7s) tricks but it was a nice shot and hey, we're on vacation. It was an interesting tour and a bit spooky imagining being confined to such quarters. I think it's my first prison visit.

Of course we HAD to have clam chowder in a sourdough bread bowl. It's just a must-do here along with the cable cars (check), and Beach Blanket Babylon which we went to see last night. It's difficult to describe this singfest/comedy/hatstravaganza, but if you're ever in town, you should definitely go see it. It's been running for 37 years, and there's a pretty good reason for that. It's good!

﻿
After Alcatraz, we took in the Aquarium where we saw som fish and spooky creatures. Then we headed to the Musee Mecanique and played a bunch of old time arcade games, and saw how old we were since many of the machines I hadn't seen since I was a kid. 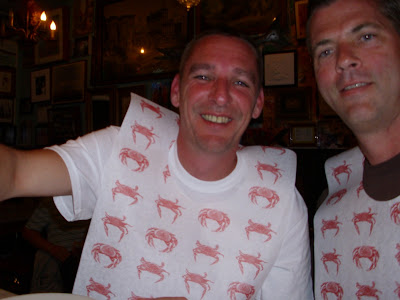 We had the best dinner last night in North Beach before the show. Crab Cioppino.  What you don't see in the picture is the ladle of seafood in Serge's hand. It was chock full of crab, shrimp, clams, mussels, scallops and squid. If you are into seafood, I highly recommend it instead of the overpriced chains down in Fisherman's  wharf.

So there you have it, we've got a couple days left here and the parental units are coming in  this morning for a visit too. We're off to the museum of modern art this morning and tomorrow I think we're going to the California Academy of Sciences. Plus more exploring and walking. I think we'll  have worn  out a pair of sneakers this trip. If retirement is anything  like this, sign me up. I could really get into vacation mode 100% of the time. We still have a week and a half, so best not to ponder the end.
Posted by tornwordo at 10:49 AM

Wow! What an amazing time you are having so far. I did enjoy 'where's naked dude' as opposed to Where's Waldo.

I lived in SF for 17 years and didn't do nearly as much as you have! LOL. I'm looking forward to more of your adventures. :)

I wasn't going to enlarge the park photo until you mentioned "naked" and then my hand involuntarily reached for the mouse...
You guys will need a vacation after this one just to recover. The cioppino and burrito sound excellent.
Have fun!

I found the naked guy right away, what does that say about me? Oh, and not only did I enlarge it (ahem, the PIC) but I clicked on him which zoomed in further. Gotta love SF and I do!

I drooled with envy at the pic of the Boudin lunch and was actually relieved that I couldn't see the seafood, my fave.

The Alcatraz pic is adorable.

Kisses to Georgie! (Sorry, I can't seem to end a comment without including that.)

But to be fair, I'm good about spotting nekkid men.

Curtains in My Tree said...

I being a middle aged widow lady spotted the naked man also.LOL

You remain one of my favorite travel bloggers. Can you spot the nekkid guy in this shot? One of 'em is Blobby!

I wish the US were half as casual about nudity as Europe. I'm so tired of people clutching their pearls over a little skin.

So, like... is nudity okay in San Francisco? So weird.

I saw Beach Blanket Babylon several years ago with Karen and Cicely; it could be compared (somewhat) to the Panto's in England. It was great, and I'd love to see it again.

You already know my opinion about the seafood.
Glad you are having a good time!

I'm pissed off! There weren't any naked men in the park the last time I was there!!

Try to get a copy of the official nude beach sign for your deck ("Clothing Optional. . .City of San Francisco"). Years ago, there was a place on the entertainment pier by Fisherman's Wharf that had them.

And you'd better hope and pray Georgie a) can't read English and b) doesn't have Internet access or c) you're both dead meat when you get home. Parks! Food! Uncle! Grandmom who made handsome Georgie quilt! Hotel room with a bed just for Georgie!!! He is gonna be soooooo jealous. . . . ;-)

And some BBB trivia---Chris March from Project Runway used to design costumes and headpieces for them---if you're at all familiar w/ Chris' work, you are now nodding your head and saying "of course!"

I like your version of "Where's Waldo?" much better. Maybe we can call it "Where's Willie?" Think about visiting Fort Point.

Ah, you're doing all the right stuff. Try to get in and see tales of the City if it is still running.

I think the run has been extended to the end of July. If you access their ad through one of the local freebie newspaper sites (Bay Reader?) you can get a discount on the tickets (40%?). I saw it at the end of previews. If you are familiar with Tales of the City and More Tales of the City, then it is a fun show.
PS Had no trouble finding the nekkid man. TMI

I did EXACTLY what Patricia did! LOL@ us!

I'm lovin' that you're lovin' your trip to San Fran! I hope to some day go there too, so I'm taking notes!

Aw, that sounds like a swell trip. I'd like to use your AWESOME bubble picture in a post I'm writing about the Exploratorium: http://bit.ly/HVftq7 I've put a link directly back to you, but if you'd prefer I didn't use it, of course I'll take it down. It's just a really perfect picture of how it feels to be there, better than most of the ones I've seen!