An outbreak of flags, herpes and lightning 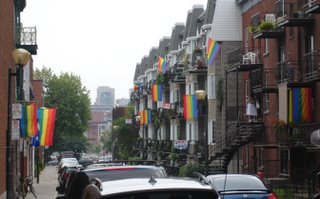 So this is one of the neighborhood streets in the gay village of Montreal. You know, I wonder what the thinking was when the 9th and 10th people decided to put flags up. "Just in case it's not clear that this is a gay street, we better put one out." (I mock, but I really don't care that much, whatever floats your boat yadda yadda)

The festivities and the heat around here have conspired to take me down. Yesterday's sore throat has now become a full blown cold. Fuck. Summer colds are the vilest. Watch now I'll get a cold sore to boot. (Also known as a fever blister, but we all know it's HERPES)

Last night we saw the most violent thunderstorm here ever. I've seen one similar crossing the Mohave desert, and spouse saw one like it in Hong Kong, but never here. It was the kind where the lightning is constant. And therefore, the thunder is constant, coming from near and far, crescendoing and waning. It didn't come out very well on the video, but I'm posting it anyway. I love how the final frame is during a lightning strike.

Posted by tornwordo at 8:43 AM

it's the gift that keeps on giving

summer sickness is the worst. the flags are amusing indeed.

I want to see Spouse dance!!! Maybe the mashed potato or the hustle!

Summer colds are the worst, drink lots of neo citran and sleep it off.

hope you get feeling better soon!

I love a good storm!

well damn I was going to read thru some of the posts but the titles are good enough! HA!

You didn't sound too excited, maybe you need some of spouse's Anti-Dullness cream. Why didn't you let him dance on your ass? If that's what he wanted to do. At least your tomatoes and Pot plants got watered.

I know you loved the thunderstorm... did it cool things down at all?

I woke up this morning with that weird throat tickle; meaning I'm coming down with something too.

Egads. Summer colds are the worst.

It's God coming to strike down all the homos.

At least that's what the angry mob with picket signs tell me.

Can we be "summer Cold" buddies?
Lame attempt to create a bond, I know, but I'd rather be grumpy with you than not.

I'm home with a headache, but no cold yet. Loved the storm sounds and video.

we love our thunderstorms!
the flags are kinda funny.
it's like the compilation of bumper stickers sometimes. democrat. pro-life. rainforest. rainbow.

It was so hot here last night that at around midnight I walked across the road into the neighbors field and just layed there while the heat lightning flickered across the sky.

Are you the guy I met Monday night?

Yes folks I think Montreal was hit with a serious bug of throat infections.

I love the flags. To bad they don't stay year round.

Did you see the trees in the streets this morning?

I have a chest cold myself. Sucks.

For some reason, yours is the second embedded YouTube video today that I have been unable to play. The counter stays at 0:00 and the screen stays black. Hmm.

You, my friend, are easily amused by electronics.

Thankfully I am easily amused by your videos.

Good to see everyone got involved. After my surgery I had the worst outbreak of Herp...er cold sores around my mouth that I've EVER had since I was like 11 or 12...appearently some surgeries trigger it too.

All I can say is L-Lysine (the over the counter amino acid) kills em quick.

I love the flags bit. More than the whole gay thing, I think it's wonderful that all of those neighbors are communicating. I don't eve know who lives in my own building!

We also had some crazy ass weather, but my vids weren't all that great.