* I have lost my scarf that I made. Over 30 hours of labor left on a bus somewhere. Sadness. 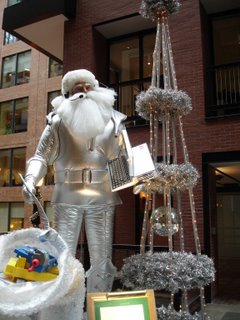 * One of my students is flying to the Arctic to collect a sample. Of water. From the tap of a federal building. Apparently, it must be brought back to the lab for analysis within 24 hours, and mailing could hazard it to be tampered with. Must be a human with the sample of tap water at all times. The cost? Five grand. Our tax dollars at work.

* One of my other students who is quite fervently muslim (yes, I know I'm supposed to capitalize it, but please don't kill me) bowed his head and prayed during each romantic scene in the film Hannah and Her Sisters. Apparently, it was evil for him to witness a man and woman kissing in a fictitious setting. And I specifically chose the film for its lack of female nudity. Sheesh. 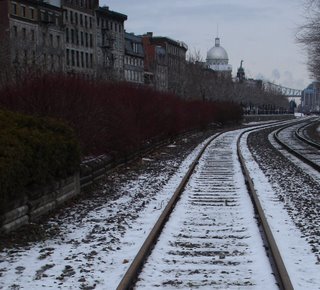 * Early December at the Old Port of Montreal (taken yesterday)

* Did you know that airlines do not only discriminate against overweight people when hiring, but also tall people? I was rejected by United way back when for my freak of nature height of 6'3.

* Do I care who's penis is currently entering Jennifer Anniston's vagina? No. Why is this information constantly in the news?

* I haven't ever been the best at anything. True story. (Except I guess at being me.) 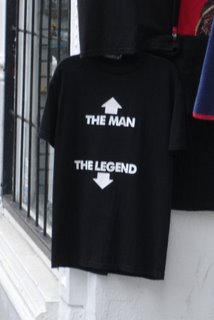 * I thought this shirt was funny. However, I would scoff at anyone wearing it.

* Eggnog is called "Chicken milk" or "Hen's milk" in French. Ewww.
Posted by tornwordo at 5:17 AM

[But I also do have to comment on the juxtaposition of the t-shirt picture and the line about being the best. The arrow for "the man" points right to it. I know you to be a crafty and subtle fellow, but somehow I'm not sure this was planned. However, it fits. Because you are "the man" and not "the legend" we come back here. HUGS!]

Sadly I usually bow my head and pray FOR female nudity in a film.
Fantastic photo of the Old Port!!

Noone can be you as well as you, well except for Alien body snatchers in which case I guess they would....

I want Disco Santa to deliver my presents!~

I love egg nog and can guzzle it like there's no tomorrow.

The muslim thing, doesn't that burn you up and make you roll your eyes?

I'd assume you choose most of your films for a lack of female nudity...
Eggnog is revolting.
Can you imagine the backpain you'd have if you stood in a plane for the entire journey. I think they have to discriminate like that just for the physical confines.

Interesting about the water. Not surprised about the airline. Shame he had to miss some good parts of Hannah. Sorry about your scarf.

"I haven't ever been the best at anything. True story. (Except I guess at being me."

In the end Torn, isn't that all that is really important...

I'm with Dickey - eggnog makes me vomit and is a waste of good rum/brandy.

I am so sorry to read about the loss of your scarf. But I must admit that I got excited just seeing the hyperlink thinking - oooh, is he going to show that great HNT shot? - followed by - he did! Sweet!

I am sorry that you lost your scarf too... It sucks when you lost something that belongs to you.

Hopefully it will fall into a grateful hands who need it and thank god for whoever lost it...

Someone in my office almost did not get the flight attendent job because he was almost Too tall too.

I'm sorry you lost your scarf. It looked really nice. I'm wondering if someone is wearing the scarf wrapped around their face. I know I would.

Love the pic of the Old Port. So bleak and cold-feeling.

Just think of all the annoying people you would have had to deal with if you worked for United. How many times a day would you have to remind people to buckle their seatbelt or tell them that their six-piece luggage set won't fit in the overhead bin?

Chicken milk makes sense to me, but is it pronounced like poo-lay-lay? Because that sounds really fun!

I care not for the entertainment news - except, did you hear EddiE Murphy knocked up Scary Spice?? Wowzers! And he denies it was him...the bastard. But really, Jen - who cares indeed! (Vince is free! He's mine all mine!)

Whatever you are be a good one! Hate Eggnog...ewww!!!Looks like Hen's Vomit. Did you buy that shirt? 'fess up! It will go with the Home of the Whopper briefs. hahahahaha!
The goal is to make all the world Muslim. Won't that be fun?
You are the best Spouse I know with the exception of Serge. It's a tie I guess. Feliz Navidad!

that santa is frightening.

have you checked with "lost & found" for the bus company? if yours isn't there, i bet there are thousands to choose from. although none of them as nice.

once again it is the time of year when i must seek protection for admitting that i actually like egg nog. and *sigh* some fruitcake too. but you didn't hear that from me!

* I know it's a bummer, but practice non-attachment and you will feel better sooner. You can always make a better new one.

* As long as he doesn't insist you do the same or think ill of you because you don't, I say live and let live.

* Snow! We need some here soon.

* You poor tall people. How you must suffer.

* I didn't until you put it that way, and then I got a little turned on.

* Same here. That's why I seek out small ponds to be a big fish in.

I love your random pictures.

You should steal the shirt and put it on the Santa thing as a joke. I doubt everyone would see the humor in it.

And being the best at being you is something people spend their whole lives trying to do - Congrats!

Ewww! That vid is terrible!

I miss eggnog. I might make some this year.

Also, I agree with live and let live too, which is why I get upset at the thought that a person who is so neurotic about sex that they pray during a movie is accorded equal rights when they want to curtail the rights of the rest of us.

I'm 6'4" and I suffer when I stand up on the subway--and bang my head on the grab-bar. Or when I shop for dress shirts (36" sleeve). Or when I don't get exit row seating on a plane.

LOVE the picture of the railway, btw.

That futuristic Britney-Santa freaks me out!!!

The double jointed kid is going to be riddled with arthritis some day. Yuck.

Frankly I think it's about time we started discriminating against tall people. Tall people and lepers.

United 93 didn't have any kissing in it. Oops, now I'm in trouble.

The t-shirt could be worse...it could have "The Legend" on the back...