* Marketplace busted the colon cleansing phenom on their show last week. I giggled every time she said poop. It's gross, but hard to look away. Here watch.

* We had our first 80 degree plus day of the year yesterday. I was reminded how crowded this city really is. One tends to forget over the winter. 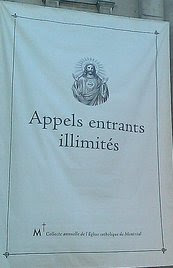 * I find this ad campaign rather irritating. There are unlimited incoming calls for Jesus. Yeah, tell me something I don't know.

* I had a good chat with one of my students yesterday as we had lunch during our final class. We were talking about culture, religion and upbringing and discussed the different ways we indoctrinate/brainwash our children. For example in America, we tell our children that they can do/be whatever they want. If they can dream it, they can be it. I talked about how I felt this was BS and if I had children I wouldn't push that message and instead push the following message: Find something you like doing and that you are reasonably good at and then try to do that. After all, not everyone can be a major league ball player.

* In contrast to America, he said that in Quebec they infuse kids with the idea that they are not superior to anyone else and if it turns out they have a special talent or skill, they should keep that information private. The result of this, he felt, was somewhat of an inferiority complex and he vowed that he would not instill this in his children.

* Oy, the don't ask don't tell debate again. Why doesn't the media point out that in military corps where gays are integrated, there have been no issues. Honestly, the straight men are so scared of being ogled in the shower or something. To that I say, "Get over yourself." Honestly, I want nothing more to do with a straight man sexually than I do with my parents.

* So clever that Homer.

* I'd have more but time is short this morning. It's the last day of my hellish schedule, hip hip hurrah. Hope everyone down south has a splendid three day weekend.
Posted by tornwordo at 6:13 AM

The colon cleansing clip isn't available in the US. Damn, now I can't find out the truth about why I shouldn't have cleaner than a whistle pipes.

Go Marketplace! Very interesting about the ideals of raising children, although I do think I like the sound of the Quebec way (not to hide a special talent, but to be humble about it). I agree that the 'you can be anything you want' thing is unrealistic. That seems to be pervasive in Ontario as well.

I don't think it matters where you're from, I think children should be instilled with the idea that they can be whatever they want to be, it depends on how hard they're willing to work for it. Granted some have more advantages and those with less have to work that much harder but still, I'd hate to instill my children with the idea of mediocrity. Guess I'm glad I don't have any, they'd be a mess! Ha!

I believe children should be encouraged to strive for whatever they want, as long as it is realistic.

I've told my kids they have the opportunity to do whatever they want but it requires effort. The oldest one is a mediocre student and puts forth minimal effort. The youngest? Tries hard and does really well. We'll see what she does.

I love your take on straight people! Did I ever tell you the story of when my dad found out one of my sisters' friends was gay? He said "I thought he was looking at me funny!" My sister replied, "Dad, just like not all women find you attractive, not all gays are going to find you attractive either!" He laughed when he realized he was retarded.

Enjoy that lack of a hellish schedule! I just read an article on how we teach/train our children to be this or that...and not how to grow up to be sensational human beings, no matter the job. Basically, it was saying to raise a CHILD, not a FIREFIGHTER (or whatever other job).

Oh MAN the straight guys who think we're ogling them, it cracks me up when it's not pissing me off.

I'm still trying to figure out what it is I think about work/talent/vocation etc. I think in talking to children I'd try to make some distinction between what we do and who we ARE. I'd stress finding work you like doing because that is how life is spent, doing stuff. If you tackle something ONLY for the rewards that may nor may not come, you're going to spend a lot of your life unhappy. Even if you DO get the rewards.

Obviously I'm still figuring this out. Probably a good thing there aren't any kids waiting to hear what I have to say.

word verification: slagiers. Is that French?

I was in the military before DADT..it was scary ..if you got caught you got kicked out and shamed.

But there was a ton of lesbian sex..oh the memories.

Wait -- What do you mean I am not going to be a major league baseball player?

It would seem from your conversation with your student that neither current brainwashing technique is good. How about we say: There are lots and lots of opportunities open to you. Try some, and when you find one you like, do the best you can at it.

DADT is making me ill. Its so ridiculous, as other countries have pointed out with their integration of gays in their militaries.

News Flash: some of us are ogling them. Or some of them. They aren't all worth a look.

Agreed on the child-raising stuff. I've read that kids are usually most successful when their parents praise effort, rather than rewarding them for everything or telling them they are talented.

And re: not ogling straight guys...that's kinda weird. I mean, yeah, you don't wanna feed into homophobic paranoia, but at the same time, I'm fine with ogling attractive lesbians even if I know they want nothing to do with me in that way.