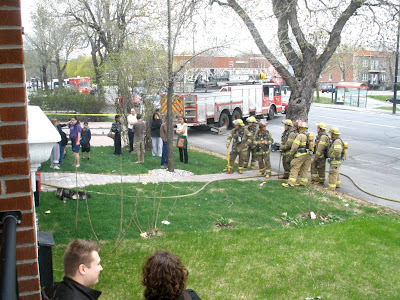 It was a little scary to see smoke pouring out of the building next door. A couple of firemen went in and the others were waiting with heavy duty equipment, I suppose in case they needed to go in and chop down walls and things. In the end, the two guys who went in first came back out with the blackened hood, no doubt the result of a grease fire. Later in the day, the occupants of that apartment moved out. We were just happy it didn't impact our building at all, whew. 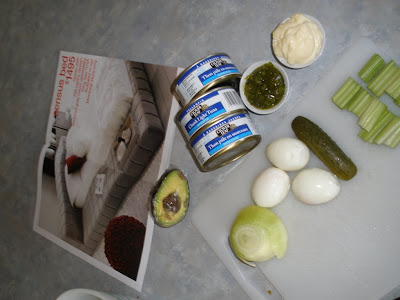 People were wondering how I make tuna salad. I made some more and took a pic of the ingredients. 3 cans of tuna, 3 eggs, 2 stalks of celery, half an onion, 1 dill pickle and a little mayo and sweet relish. Pepper to season. The avocado is for the sandwich and not part of the tuna salad. I also put tabasco when I make the sandwich. Also, the flyer there depicts the bed that serge and I are presently lusting over but not buying. Serge jumped up and got the camera and took a few shots of me like this. Later when I asked him why he had taken them, (I didn't ask when he took them because I was glued to season 4 of Six Feet Under) he said it was because he thought I was cute and looked "man". Well. I certainly don't see it, all I see are the sunspots, double chin and puffy eyes. I suppose the elbow is cute enough. Happy Monday peeps.
Posted by tornwordo at 6:14 AM

Living with Serge must be a scream.

Mmm, I love me some tuna salad.

You do look all manned up. If you only had a beer in your hand. A few holes in the T-Shirt would help too. We'll pretend you're watching sports.
I can't even stand the smell of Tuna Salad. ed

Ha! Living with Serve is a scream.

My momma's tuna salad has been bastardized with picklalilly! The Tabasco is a stroke of genius though so I'm stealing both items next batch.

You do look all man. I think it's charming he noticed.

Sorry that you got the crud. I deeply respect that you went out and saw the flowers.

I can't remember my hubs ever jumping up to get the camera because he thought I looked cute so no complaining!

Ha! Did you read that? "GLUED" TO SEASON 4! It's a funny little thrill when you love something and recommend it highly to someone, and they love it, too. SFU represent!

I think Serge's impulse to snap a photo is sweet, and yes, there is something "man" about the photo - even sans beer can.

Never complain when your spouse wants a photo. You look great, honey.

I'm sure that salad tastes great, but I'm a minimalist: mayo, sour cream, and celery. (Sour cream has less fat and it keeps the salad from going fishy the next day.)

I know you're sick, but no sex with the firemen? What a missed opportunity.

I hope you talked me up with the firemen.

I like my tuna with a little miracle whip and pepper. Your way sounds grown up!

It's cute when you and Serge love each other.

Haven't made tuna salad in a very long time now, but I would sometimes put a pinch of celery seed in it.

Even before I read this post I had tuna salad for dinner. There must be something in the spring sunshine, except that we had rain all day. Oh, well.

He loves you. You look just like his husband, and there's nothing more handsome than one's very own husband. I know, 'cause I think (though you are a cutie) my husband is the best looking guy on earth.

You must post more about Six Feet Under. I'm so glad you're enjoying it.

Tabasco in the tuna...interesting idea.

Glad you are enjoying Six Feet Under. Its such a well-written, well-acted show.

It's a good nose.

I say - get the bed. Life is too short to not have a good bed that you love.

Yes, the fire is kind of scary as is the photo - I mean I am looking at all the firetrucks and seeing this photo of a pickle some eggs and stuff and thinking, "What the...?" Is this what he has decided he MUST save in case the fire spreads? A single pickle (bring the jar!) - but it turns out to be tuna salad.

I think you look 'man' and actually rather someone I would trust, which is how I rate people when I mostly only get to see caregivers, so that is a compliment, I guess your inner values show through. But no, not seeing a hottie until you show some cleavage!

Glad to hear that all is well with your place. Your elbow is looking a little chafed. Get some Vaseline on it. ;-)