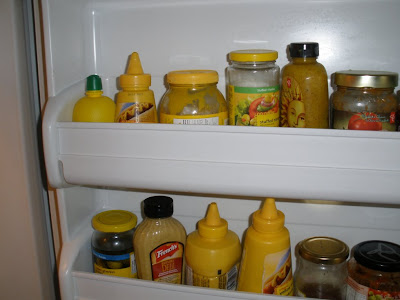 I brought home some mustard from the market yesterday because I wasn't sure if we needed any. When I got home I realized we had six jars in the fridge. I felt pretty lame but luckily it's the cheapest of condiments.

But I can even top that retardation with this bit. Here's how retarded I am. I bought a concert ticket for myself and then subsequently purchased a plane ticket for a flight that leaves the day of the concert. Neither is refundable. I'm going to try to sell the ticket, but I may end up having to toss in in the garbage, boo hiss.

Well we finished Six Feet Under. It cost $91 to watch the whole series. We probably should have just bought it. Now what will I do every evening? Honestly, we've watched nothing else for the past month. I guess I can catch up on 30 Rock and Old Christine now on the digital recorder. It wasn't until the very last episode that I realized that Michael C. Hall is not the Nate character but the David character. To be clear, spouse was (still is) lusting after the Nate character, or Peter Krause. When spouse finds me cute, he calls me Nate now. I feel depressed in that post vacation way, you know, it's all over and there will never be anything like that again. I've got to go back to that blog post to find other suggestions because it sure is fun to be able to watch the next episode whenever you want and not have to wait a week like on regular tv.

People were wondering out loud if I just record the news as a matter of course. Actually, it's the DVR that does that. It quietly records whatever you are watching just in case you want to back it up and listen to something again or pause it or whatever. That's how I am able to make videos of stuff I see on the news. Once I change the channel, the machine discards the recording. 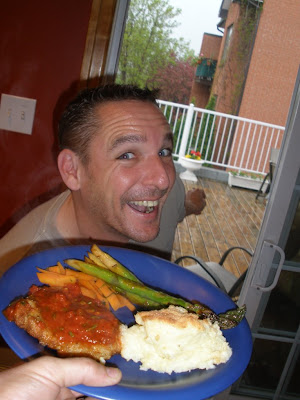 Friends are in town and came over to make us dinner last night. It was yummalicious. Here's the main course, pork parmesan with potatoes and veggies. The starter was a to-die-for seafood chowder. AND, there's a bunch of leftovers. This morning we're off to catch (a true) matinee showing of Star Trek on the IMAX screen. Happiness.
Posted by tornwordo at 6:35 AM

In fairness, Nate is fairly awesome, as a character and as eyecandy. I just loved all the characters on that program. They never seemed exaggerated and the arguments and good times seemed so genuine. I also instantly like any programme where they show a strong bond between two brothers. That's probably the main reason I watched Heroes.

Krause was in some US drama not so long ago, but it was a bit of a flop, I think.

I too felt depressed after the last Six Feet Under episode. It was probably the best television drama ever and t was a let down knowing there was no more.

I watched over it over several years -- most however, on DVD like yourself. In fact, liked watching on DVD better than the couple of years I had HBO.

I particularly loved the final episode. For once I didn't feel let down by a series not coming to a full conclusion.

Hope you enjoy Star Trex. Let us know what you think.

Oh, as for mustard you must try Nance's Sharp & Creamy. The absolute best!

If you find a spare moment and are in a reflective mood, please consider the idea of making an effort to quit tossing around the words "retard," "retarded" and "retardation" so easily. I'll still like you and I'll still read your blog regardless of the outcome of your reflection, but will feel better knowing you took a moment to ponder it.

Is there a reason you didn't want to borrow "Six Feet Under" from the library (the BNQ)?
I'm just starting season 6 of "24" which I've borrowed from them.
You'll never find it if you just drop by; but, you can reserve online. They call when it's available, and put it on a shelf on the first floor for you to pick up within three days.
Just wondering?

We kept doing that with Onions in our house. We'd go do some shopping and hub would say "Do we need onions?" and I'd say "No, I don't think so" and he'd say "Let's just get a couple..." Well, next thing you know we have like, 20 onions! It was retarded.

all that mustard made me laugh out loud!

The condiment kings! That's what I'll call you from now one.

Now, the $91? Don't you all have something like netflix there? I pay less than $10 a month, and can watch pretty much all I want.

And Seafood Chowder? I don't think "delicious" is the word I'd use for it.

Well, the mustard will keep on the shelf, as long as it's sealed. I probably have twelve bottles of organic ketchup because I keep thinking I'm running out.

Can't you get videos from your library? It might save CN$

I see Serge has his ciggie hand sticking out.

If you haven't seen the Sopranos, do so!

We saw Star Trek this weekend :-) It was good, but it was also very LOUD.

In your defense, it does look like you have a couple different kinds of mustard.

Heehee - I love all the mustard. I was like that with mayo, then I realized that every single bottle was expired. Barf.

i love mustard! yum! just writing the word made me want to have some!

I see at least 3 kinds of yellow mustard...yum yum!

perhaps a honey, a brown, and some unknown.

and some lemon juice.

BUT WHERE'S THE KETCHUP?

Whatever you do, don't waste a month of your life (that you'll never get back by the way) on the L-word. Oh sure, the first season is great (remember to suspend that disbelief) and sucks you right in, but then it's all downhill from there. The final episode is perhaps the worst final episode of a series *ever*

I lost interest in 'Six Feet Under' for a year after David picked up that hitchhiker. I thought they got WAY off track. ...that and the dead people stopped talking in Season 2.

Nate, great to look at, but kind of turned into a major asshole.

But if you like Peter Krause, you should really watch 'SportsNight'. He's great in it. They all are.

Mustard is so good and so good for you. Artisan or gourmet mustard is the way to go. If you can stand the thought, take action and ditch the French's, you'll be glad you did.