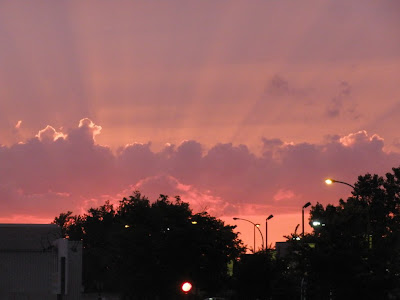 Oh my God you guys. My new class/student is killing me and I've only done three days out of 30. It is about as exciting as watching grass grow. Yesterday, he asked me five different times what "and" meant. Retention is really not one of his innate abilities it seems. Today will be day four of me repeating myself half a million times. He told me yesterday about how he was a truck driver (all this in French natch) and did long haul gigs over to Winnipeg. I asked him how he handled being in English Canada and he said he basically hid in his truck and communicated with no one. Never went to a restaurant except in Quebec. And he was making six figures. (This surprised me, I thought truckers had it hard.) He had an accident on the job which is why he is in this retraining program through workman's comp but he confided that he will probably just go back to trucking. He's just taking advantage of the years of free school and free money. He is darn proud of his milking the system too. Sigh. 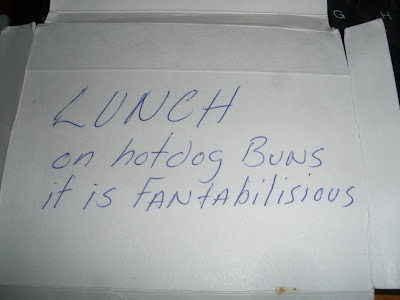 Serge's little note to me after he transformed the leftover chicken from the bbq into chicken salad. As far as I know, he coined that word (even though he spelled it wrong.)

I worked out a budget that we need to stick to if we want to maintain our lifestyle, frugal as it is. Basically we've got to gross 50k. That seems doable even though I haven't cracked 20k since I moved up here....nine years ago. That's all changed this year since I picked up these extra workman's comp gigs. Still, Serge is down to just 10 hours a week at the job and the rest has to come from new business/clients which you can never count on (though he does and it usually works out.) The really bad part of doing the budget was seeing that we spend as much on booze as food. (!) That has to change. Granted, booze up here is likely three times the price of whatever y'all pay, but still. What a waste of money.
Posted by tornwordo at 6:25 AM

Mrs Coffeedog used leftover hotdog buns for toast one morning. Why does Hebrew Intl only put 7 dogs in a pack, when there are 8 buns?

Booze - I am buying fixins for mojitos this weekend :-)

I sympathize about your student. Many years ago I had a very low-level Quebecoise (she worked in this factor way out in East Montreal which took 90 minutes by bus to get to) and it was two hours of pure blueface tedium twice a week. I dreaded it like a root canal.

The way I got through it was pretending that she was some secret terrorist and I was a spy in the guise of an English teacher: my goal was to make her talk!

Well, is he at least a hot trucker?

That's why I work with kindergartners, they may not know much when they first come to school but love to learn. As for the budget,we spend tons of money on eating out, a real budget buster and we should rein it in.

We can always send booze care packages, what's your poison?

I wonder what kind of upbringing the trucker had to have such an aversion to the English language?! So bizarre. Take it one day at a time. I don't know if he'll give you the Helen Keller moment you are waiting for but he may learn something eventually.

Maybe you and Serge should get a still and make your own moonshine?

Actually, when we go up to Canada we buy booze to bring back because it's so much cheaper! That could just be Washington state, though.

Just don't resort to booze in plastic bottles. It's a rule of mine that's served me well for nearly twenty years.

But it's the booze that's going to help you with this student.


Can Serge pick up a part-time job doing something else? Perhaps more meters need to be painted?

Oh, and the note? Too cute.

If you make up a word, you can spell it however you like. :)

With your trucker: try having him solve similar problems in French first and note his thinking processes. Ask him to describe how he arrived at his answer. That might give you the track to follow in English. Or not. Good luck.

sweet pea, here's an idea. stop traveling so damn much. this year alone you've been to L.A. (twice), vegas, vancouver, seattle, chicago, new york and the caribbean. a little hard to take you seriously when you practically live on a plane.

We are all so full of crappy advice, aren't we? ;)

My word verif: fonesses. That sounds like something bad in French.

Yeah, booze can certainly be big expense. You could always live off junk food, McDonald's and Burger King, albeit your waist size will triple.

That is a great picture! The colors are amazing!

an airhead who milks the system?! sounds like one of my bad dates! keep calm and carry on!

(Any chance you can get Serge to quit spending dough on smokes?)

Budgets. UGH. I hate them. It's bad enough to do them at work, but worse at home.

I can tell MY staff no, but I don't want nobody telling me I can't get something.

Careful...Mightn't you be sacked if the powers-that-be learned that you wrote about students on your blog?

Admittedly, it doesn't sound as he'd be able to find it. But he might have a friend who can...