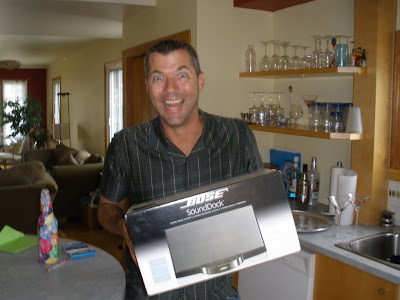 So spouse got me what I wanted. Of course I told him not to spend a lot but he said that the gift was for him too and he's worth it. Whatever. It works great and now we have music throughout the house. It's amazing how such a small gadget can vibrate the whole building. I don't know why but some songs on the Ipod are naturally louder so we have to be careful about the volume level when it's on shuffle mode. 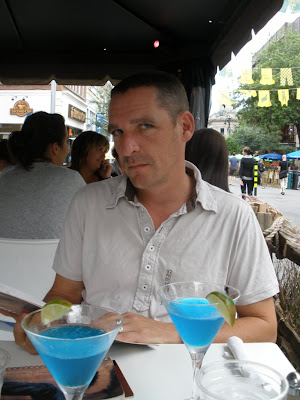 We went down to the village for dinner. I was perusing the martini menu just looking for a plain one when the waitress arrived to take a cocktail order. So I asked which one she liked and you see those in the picture. I can't remember what all was in them but look at the pretty color. I ended up ordering a burger (with bleu cheese and carmelized onions) and did not have cake. 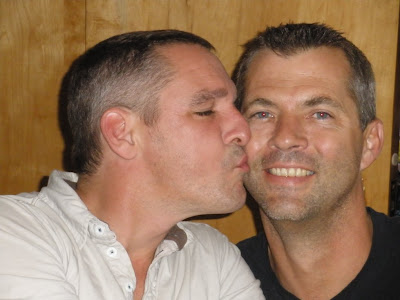 I got a birthday kiss too. You know birthdays get less and less exciting as you age. I can remember not being able to stand the waiting as a kid and now it's just pretty much another day. In fact, I worked my job which I haven't done on that day in ten years. (since I'm usually off at this time of year) I received 4 cards this year. Two of them had pictures of dogs on the front and two of them had pictures of little boys on the front. I'm not sure what that means but there it is.

Today I'm heading over to the bike rally to wave in the riders. They have ridden from Toronto to Montreal to raise money for aids patient care. I'll take pics and meet a couple bloggers.
Posted by tornwordo at 7:02 AM

I love that picture of Serge! What a cutie pie.

You can adjust the volume of your iTunes files under "File> Get Info> Options." Most new mp3 electronics can read it and change the output, but not all.

I have been wanting one of those BOSE things for a while. Glad you had a good day. Say hi to Snooze for me.

Do you have "Sound Check" turned on? It's in the options under Music.

"Sound Check is a feature that allows you to hear all of your songs at approximately the same volume. You can turn Sound Check on and off in the Effects panel of iTunes preferences."
John

Awww, you two or are so cute together...and so are the drinks, by the way...

I dunno... it looks like antifreeze in martini glasses to me.

I have a rule; I won't drink anything alcoholic if it's opaque or blue. It's served me well so far.

Also, you forgot... you got another card; with the guy in the gas mask?

I so agree with you about birthdays. As a kid, it seemed like agony waiting for the day to roll around. While I wouldn't say that I am totally unaware of my birthday, they don't hold much magic anymore.

I'm glad your birthday was good. The drinks look delicious to me.

Sounds like you had a wonderful day. We have a sound dock from Apple and it is brilliant and like you said it's amazing how much sound can come from such a little box.

I noticed that the drinks are the same color as the umbrellas in the background of that photo. Coincidence? I think not.

Sounds smashing. I must try one of those blue drinks...how neat.

Sounds like a lovely birthday. The photos are great!