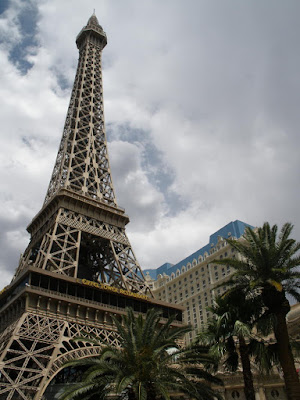 Wow, I've already been gone a week. It sure passes quickly. Vegas was a whirlwind of gambling and eating and we didn't lose too too much, which is just a hair less fun than winning. But only a hair. I have seen so many movies too. The trip started with me being upgraded to first class. I have no idea why and I didn't ask, I just thanked the universe. On the plane I watched Race to Witch Mountain because the version they made when I was a kid had made such an impression on me. I liked it. Then I watched Gran Torino which Birdie had recommended and WOW what a great flick. I could not stop laughing at Clint Eastwood's cantankerousness and the ending was one of the most satisfying I can recall. Then when I arrived in Vegas, Laverne's flight was delayed so I went to the movies and saw My Sister's Keeper solely because it was the next one showing at the time I arrived. Ugh. I don't go to the movies to have my heart ripped out, but that's what this one did. Can't say it was a bad movie, just a difficult one.
On the way to California from Vegas, I had a little automotive mishap, and when I say mishap, I mean I may have rear ended someone. Stupid old people don't know how to drive, but since I was behind them, some blame surely fell on me. What kind of car did I ding? A freaking Jaguar. I'd show you the minorness of the damage but I don't know how to erase the license number with my mom's computer (where I'm posting this from) but it's just a little bumper scratch. The rental car is fine too thank the baby Jebus. Still it kind of screwed up my mental state for a couple days.
On the 4th, I went on a big hike to a waterfall in the San Gabriel mountains and then visited the pappy on the 5th. We went to see The Hangover together which caused us to giggle helplessly throughout. If you like movies targeted to youthful males, this is not to be missed.
Now I'm camped out at mama's house until next weekend when I'll head back to Vegas for my flight home. Don't miss me too much now. Mwah!
Posted by tornwordo at 11:17 AM

We watched Race to Witch Mountain on one of our flights yesterday, too. I was really dubious, since I'd enjoyed the originals so much as a kid and since reviving a franchise so often doesn't work. This one was pretty good, though. Light summer fare, but enjoyable.

gosh - it feels like you've been gone longer than a week!

Wasn't Gran Torino just the best??? I was laughing so hard right up until I was bawling!!

Wow, sure sounds like you are making the most of your trip. Have a ball!

P.S. my verification word is "cookin"

I'll have to check out Gran Torino. Sounds interesting.

I had a tiny little connection with a car in front of me. It was on one of my trips last year. My 19 year old pick-up truck barely kissed the back bumper of, wouldn't you know, a Mercedes. The entire back bumper is one piece of molded plastic. There was an itty bitty bump right in the center, but this guy _had_ to get it fixed, because of course it was a Mercedes. The connection also bent my front bumper a tiny bit. I didn't get mine fixed. Why bother?

I hope the rest of your trip is as fantastic or more than that which has already passed.

Sounds like you're having a blast. Did you get to Laguna?

Good to hear from you. Glad the wreck wasn't too bad. Hugs!

Oh, I remember those movies! They were pretty cool.

Enjoy yourself. It sounds like you've been having fun, despite the Jag prang.

The Boy In the Striped Pajamas had a similar effect on me to what My Sister's Keeper appears to have had on you. Not a bad movie, just a difficult one.