We had a nice turnout for the barbeque yesterday. It's the first time we've thrown any kind of party in almost five years, since our wedding in 2004. The skies cooperated and though it got rather cool in the evening (we dragged out blankets for people to drape themselves with) there were no spoiling downpours. I prepped WAY too much food. I think I have forty hamburgers and 30 hotdogs and 6 chicken breasts left. It was pretty much a perfect night - good food, lots of drinks and oodles of laughter. This morning I'm rather hung but that was to be expected. 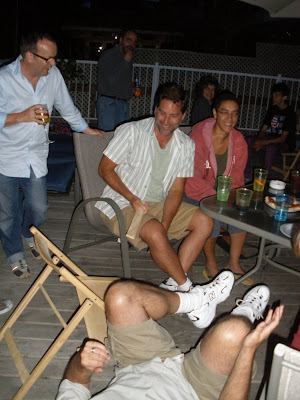 We had a couple of really funny moments. Here you see the collapsed chair next to Bryan who immediately shrieked, "I'm gonna sue!" Naturally him and his hubby had driven up from the states. They're old friends who recently moved to Boston from California so it was fun to reconnect with them and have an excuse to go visit Boston.

When it started getting cold I decided that I needed a sweatshirt so I headed for the walk-in closet. Unfortunately I didn't think about the fact that you have to go through our only bathroom to get to the closet. Without even thinking I barged in on poor Emilie who thankfully had just stood up from her pee. The look she gave me! All I had in my mind was the image of the sweatshirt hanging in the closet so I was kind of shocked too. Embarassing.

Speaking of girls peeing. When the party was winding down, someone made the observation that "they couldn't believe how many girls leave the seat up." I knew this one because I'm sure we've discussed it here on the blog before. "That's because they only sit down at home!" I clarified for him. Then I had to imagine all the female party guests in that awkward squat. I giggled at each image that conjured. I was thinking it was the booze, but I'm giggling still this morning. Happy Sunday peeps.
Posted by tornwordo at 9:49 AM

Perhaps Emilie was expecting you to whip out your camera.

David's plugging away on his "outdoor living room" project so that we can hopefully have some sort of cookout before summer's over. Today it actually feels like it might finally be here, though it may only be for the next two days.

I'm often amused by the absence of one word from a sentence:

"This morning I'm rather hung but that was to be expected."

Of course, maybe that was not an accident. In which case, how does one organize a party to achieve those results? :-)

I must be brazen because I always sit on the seat unless it's totally disgusting. I don't have the thigh muscles for squatting! LOL!

Glad you had a good barbeque! You need a chiminea on your deck to keep your party people warm!

I only squat over the public toilets, not at a friend's house. But, there are those drunky men too, who can't be bothered with actually hitting the water at times... so then it's squatting there too.

Agreeing with James above.

And, also, how do you prep hotdogs?

Glad you are back; I missed keeping up with you guys during your absence!

I can always count on you when it comes to people's toilet habits. ;)

No, no, no, people. "Auntie's a little hung this morning." Or something similar. It's definitely "hung."

Looks like fun. Why do you have to go through your bathroom to get to your closet? Sounds awkward.

If you visit Boston you must let me know! Although, if he sues you the friendship maybe at a pass. : )

Sounds like a great time! I remember the toilet seat wars when my daughter was at home. I'd put the seat down, she'd put it up. She claimed it was just as easy for her to put the seat up when she was done as it was for me to put it down. Talk about pottie parity.

If you make it to Boston, you should give me a shout! I'd love to meet you guys.

Where else can I find lengthy discussion on potty habits? Good morning, everyone!

Put Indy on that travel agenda, too.

Oh, teacher of English! "He and his hubby."

Glad the weather was cooperative for your event.

I wish that I still lived in Boston. So few people want to visit Decaying Midwestern Urban Center.

I am surprised that by the women who would not use a friend's toilet seat. Avoiding them in public restrooms, I understand. But shouldn't they give their friends the benefit of the doubt of being clean?

leftover food is a good thing! i always make too little food, so guests are starved and i have nothing to eat the next day when i'm hung over.

Your party pics on Facebook were hilarious...the ones with the broken chair victim. Looked like fun! Don't you love Party Afterglow?

I had to laugh out loud at the image of the girls squatting to pee because when I was a kid my mother told me never to sit on a toilet seat that wasn't my own or I would get ass rot and my butt cheeks would fall off. (Sadly, I believed that until college...)

Glad you had good weather for your soiree.

Walking in on Emilie = YIKES!!