Well I started a new contract yesterday and I'm surprised once again at how little someone who lives here knows English. Pretty much all he knows is yes and no. I'm sure it's the same with Americans in some of the southwestern states with Spanish. (Heck, I was one of them.) This new guy I've got is awful nice but has professed to having failed French in school, his mother tongue. I have a feeling I'm going to be pulling my hair out over the next five weeks. I'll be practicing my patience that's for sure. 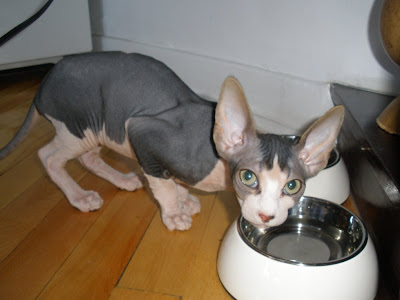 Here is our new upstairs neighbor's kitty. When Serge told me about the "ugly Egyptian cat" I went upstairs to check it out. So Cute! We were up there because Serge was changing a light fixture. I was holding the kitty (who purred up a storm every time you touched her) and Serge kept calling out to be careful because they cost $1200. Later on he told me we could get one if I wanted since they are easier to care for than a dog. I'll take both but if I have to choose only one, it's going to be a dog. Still, isn't she adorable? It's not really hairless, but the hair is so short it's like it was recently shaved. I thought she looked like something from Lord of the Rings.

Finally today, I've got a little video that I took at mom's house out in California. I had invited my cousin and her hubby and daughter over to play and I asked if they knew how to dive. They didn't! I got Carley to show me her "dive". The video is her second attempt. I think it's hilarious (in the lovingest possible way) especially since right after this video she asked, "Did my head hit the water first?"

Posted by tornwordo at 5:26 AM

Carley stole my dive! I perfected that!

That cat sorta skeeves me out. At least it was a nice cat. I'd take a dog over a cat any day.

That kitty is ADORABLE! Those ears are huge! We had a sphynx until last year when she died. Brings back some really good memories.

Funny how some people love sphynxes and some people hate 'em. I wonder if that could be a predictor of other personality traits.

That cat is too ugly not to love. It reminds me of a Friends episode where Rachel got a hairless cat. One of them asks, Why is that cat inside out??? and another says, Don't worry, it's not a cat!

I'd love to know what someone names a cat like that. Surely I'd be tempted to go with Fluffy, but that's just me.

Seriously ugly cat, but absolutely adorable. I know how velvety soft a cat of that breed feels, too.

I'd purr if you petted me too. Clearly.

That cat is a cat only its mother could love. So ugly that he's cute. But seiously, skip that cat and go for the dog. As far a diving goes, Carley "dives" just like me right down to the holding of the nose!

Cats are really easy to care for...

Even though I love my dog, when he's gone, I'm going to stick with cats. Cats are fiercely independent. A hairless one might be more dependent though and cuddly. Especially in the winter!

I like both cats and dogs. Cats have an advantage, though, if you travel for long weekends as they can maintain themselves.

Is this student paying the bill for lessons? That might motivate him in ways that previously "free" education didn't.

Because they have so little hair, sphynxes are serious lap cats. They spend as much time as possible trying to suck the warmth off of you. They're also prone to skin issues and tend to have upper respiratory problems from coming from catteries, but they're neat cats.

So what is that thing in the first picture? Like a Lizard or something? I remember that friends episode too. There wouldn't be hair all over the place like with a real cat. ed

If your cousin's family had been from Florida, they'd all be divers. Everyone learns how to swim by age five. (Next time you fly to FL, look at how many turquoise swimming pools dot the landscape.) Swimming is like walking; everyone does it eventually. My claim to fame: a clean one-and-a-half. (But not anymore.)

I have mixed feelings about the kitty. More pity than love, and I love kitties. I do find dogs more rewarding.

I thought that was a fake cat picture. That thing's butt ugly! But I suppose cute in its own way. I much prefer dogs.

I have to say, that is NOT one of the prettier cats I've seen. It DOES look like something from Lord of the Rings.

And your laughing just got me giggling. I thought everyone in California knew how to dive.


I remember diving off the high dive for the first time; I think I was 14. Now that was scary.

I used to mess around with this guy who had a Cornish Rex. They look somewhat similar to the cat in your picture, except they're uglier and more adorable. Except for being litterbox trained, that cat acted just like a puppy: all friendly and attention seeking. It was great. You should look into them. If I were in the position to have a pet, that's probably the sort I'd have, even though I've always been more of a dog person.

I'm a cat person, but that one does not really suit my fancy. ...and I am FANCY!