Oh boy is it cold here. I just can't believe how vastly different a place can be after less than four hours in a plane. We had windchill of minus 30C all day yesterday and the poor dog, though he wanted to go outside, once there he started limping all around because of his little tender feet getting all frozen up. He sure is different from Sara, nothing seemed to phase her. I caught him eating a steaming hot turd he'd just produced yesterday too. I banged on the window (he was out on the back patio) to stop him and then I ran to the kitchen and grabbed a baggie and ran outside (barefoot and in my robe) to get it, but he had already snarfled. It really is time to pick up some of that "forbid" product to add to his food. At least his poops are all perfect now. 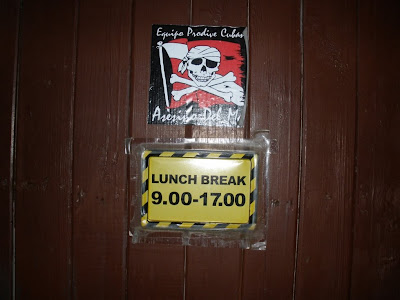 I think I left part of my heart in Cuba. (Besides with the beau Orlando) I always know I had a good vacation when I feel all bluesy back home. One of the great things about being there was the lack of connection to the outside world. Cell phone didn't work and though we bought a one hour internet card, we only used about half of it to check on email. Actually Serge did most of the checking since he was worried about his clients. I really liked the fact we were unreachable. I spend way too much of my time at the computer, so to blob around reading was heaven. 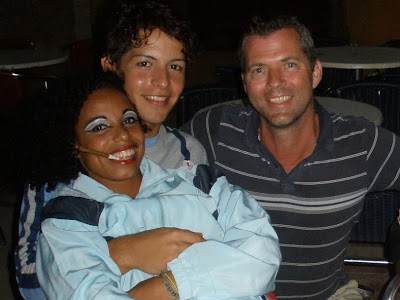 I keep thinking about when I can go back. A lot of what I liked was talking with the people there about their way of life. Although technically a "communist regime", the fact of the matter is that it's a military dictatorship in complete control. There were many sideways comments like, "Fidel always eats well." When I got them to talking, they were very careful about what they said if other Cubans were about. There is no free speech there and talking against the system in any way can get you into trouble. Well, not you, but them. Everything is controlled by the government, and I mean everything. There were two soldiers residing at the top of the hotel scouting the waters for any Cubans trying to get out to international waters. Likewise, when the plane was taking off, soldiers with long rifles stood watching to make sure no one ran out to jump into the airplane's wheel well. And all along the highways, there were military checkpoints. 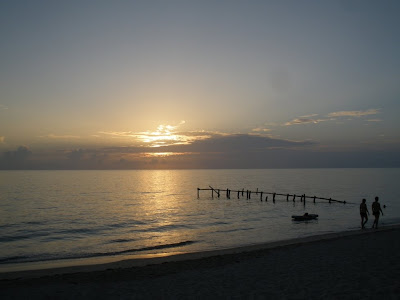 But when I asked every person (granted, the people I asked worked in the tourist industry so they probably had it better than many) if they were happy, they took a moment to reflect and answered with a genuine, "Yes." And they make under $20 a month in salary. Some of them get tips too which I'm sure makes them the envy of many. One of the worker's daughters got her first job as an accountant in town. Starting pay $6 a month. Can you imagine? There always seemed to be a lot of workers for not very much work. I heard that yes, they try to give as many people employment as possible. On the last night we had a farewell dinner at a restaurant in town. We were the only customers, 19 of us. There were 11 staff to serve us and then after we were treated to a show with 21 performers.

One of the guides was very open about things once we were away from prying ears. (They are encouraged to rat on each other.) She said that 20 years ago, before the tourist industry got going (a necessity once Russia stopped propping them up after the fall of the iron gate) people were happy because they didn't know what they didn't have. There was only state TV and no internet so they were isolated in their culture and didn't know much about the modern outside world. But now that they can talk with outsiders and see what they have been deprived of (freedom, the power to choose their leaders, the possiblity of wealth) there is starting to be some resentment. But what to do? Unless the military itself revolts, there's not much anyone can do. The people were really hoping for some change when Raul took power but that has not really happened. Kinda reminds me of Obama in that way. 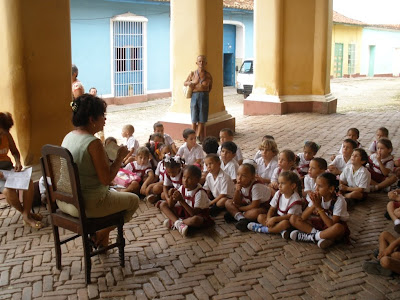 They don't blame the US at all (in fact almost everyone seemed to have a long lost relative residing in Miami) for the embargo, though that has surely negatively impacted their quality of life. The US doesn't want to support the regime (but cough China cough is no problem) because it's not democratic, but it only ends up hurting the common person. I wish Obama would loosen things up so that they could have more goods. We gave a pair of shoes away and you'd think we gave the person a car. Basically everything is scarce or reserved for the tourists. It was really weird to see the bottles of shampoo inside of a locked display case as though they were Rolexes. Still at $4 a bottle, that's like two weeks salary for some. We really are blessed to have been born here in North America.
Posted by tornwordo at 6:16 AM

On the other hand, despite the lack of individual freedoms and the poverty and the fact that just being queer is considered suspect (if not outright criminal), they've got nearly 100% literacy, lower infant mortality rates, free access to education (incl. university), and because the gov't recognises access to health care as a fundamental right, they have a life expectancy that rivals the US and an infant mortality rate that's even better than the US. So, yeah, more contrasts than just the weather.

Mrs Coffeedog's dad (a Spaniard) was raised in Cuba. I think he lived a comfortable life there, his family had $ back in the day. He is so much fun to hang around with, he english is good, but he still has his moments, and we giggle immensely at the way he days things.

Yeah, I don't understand why we cut Cuba off, they are harmless and like Mel says, everyone is taken care of so why are we miffed?

The whole freedom of speech thing would get me tossed in the clink if I were a Cuban. My mouth is definitely Canadian!

And we had that -30ish weather at the end of last week and it was awful for poor Tazzy. He'd squat to poop and it looked like he was dancing, he kept pulling all his paws up. Switch George's food until you find something that works in both the stool and the eating of stool departments. Taz still isn't eating his poop since I switched him to Purina Vet Formula, and he used to love the poopsicles.

I do accept that Cuba has so many downsides, but I also see the good points that Mel notes. The salaries are low, but they get goods subsidized. I would rather live in Canada than Cuba, but I'd much rather live in Cuba than most other Caribbean countries where there seems to be freedom to live in abject poverty and violence.

Cuba's military regime has also been bad to the gays (to say the least).

Very interesting! Thanks for sharing your experiences and photos.

This is fascinating. We know so little about this country that is a mere 90 miles from the southern tip of Florida.

I know why the embargo was begun, but those conditions no longer exist. I don't know why it continues. Like the answer to almost all "why" questions, I suspect it comes down to money.

Thanks for that post - it's pretty much exactly how I see Cuba - a place where so many things are scarce, but the people are happier. I've been in a funk since I've come back, and I dream of being able to spend three months out of the year there somehow. Just a sanity sabbatical. And the embargo - as asinine and selective as so many other US policies.

Welcome back to reality and the cold weather!

So glad you got to have a tropical break from the winter weather. The pictures are beautiful. Orlando is a cutie.

Your descriptions/experiences pretty much confirms my suspicions about life there. I will affirm your statement that we have been blessed by the accident of our births, but I would also feel a touch of sadness that people can be happy with so much less [in the way of material goods] than we have until they see what the Jones's have and think they need it to be happy. Certainly I do not envy them their controlled political society and the lack of free speech. Like one of your other commenters, I have too big of a mouth to live in such oppression.
I must also comment that I appreciated you aside on Obama. He has become a gross disappointment and becomes more so day by day.

I couldn't have enjoyed this more. Love hearing about your trips, especially to places I've never been!