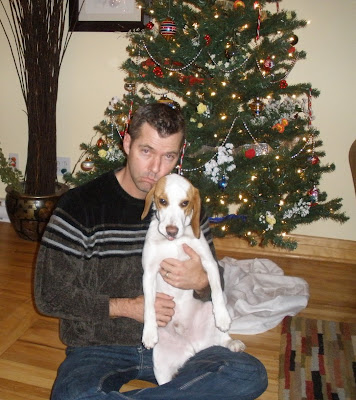 I decided to make a sad face like Georgie has. What I really want to know is why it looks like I wet my pants. Does it always appear that way with these jeans, hmmm. We spent a long time trying to get a good enough shot for an xmas photo. These are some of the cuter rejects. We finally settled on one, but you'll either get that in the mail or see it here on Christmas. 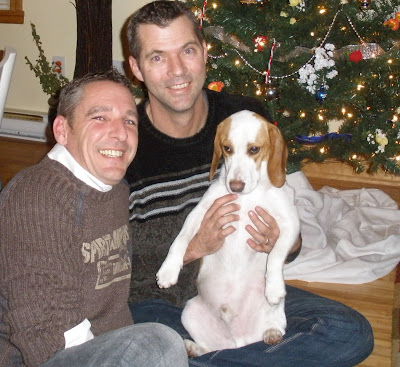 He really doesn't want to participate in this activity at all, but we were determined since we didn't do a photo last year. There was no doggie last year if you'll recall. 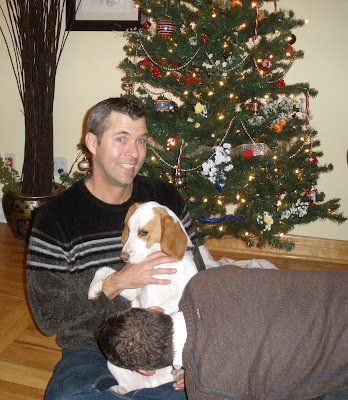 This was Serge's idea. Don't worry, no pets were harmed in the making of this photograph. Although it didn't make the cut, it made the final considerations. Finally, we decided it was pushing the envelope, but not too much for the blog of course.

Yesterday I had lunch with fellow expat blogger Frank and he turned me onto a little software program that hides your IP address so that I can view content that is only available to those on US soil. It's called Hotspot Shield and it works wonderfully. I can watch things on Hulu now and Comedy Central and the best thing of all, Pandora works again! Now I get why Amazon made it so difficult, it's because there's this kind of workaround when you are abroad. The company actually sells advertising for merchants who want to target expats since we are the ones most likely to be interested in such a product.
Posted by tornwordo at 6:48 AM

What a handsome group! I'll say it again that Georgie is one lucky dog. Could I take his place in that last photo? LOL!ed

I cracked up at pic3. I knew that Adam Lambert performance would spark a new craze.

Georgie doesn't like posing for a picture much, does he? You probably bribed him...

I like how you're riding the Adam Lambert wave with that last pic; it's very now.

That's great. I'm glad the site worked for you. We caught up on the 2nd season of Mad Men that way.

Uh -- Just what types of products are they selling to ex-pats?

Serge may need to work on his technique. Georgie's still making the sad face.

I was thinking old Georgie might like a modesty patch for his, um, junk. Maybe a holly leaf and berries? HA!

I need to finish decorating my tree.

Torn! I love you! I think I found Pandora through you. I had a really crappy night at work, then I read your post, loaded all this up, Pandora opened to allof my old stations and led with Eva Cassidy. Perfect. Thanks! Jen

OMG! It works for British stuff too! Channel 4 on demand works. BBC works. I know I said I loved you before, but now I *really* love you! Jen

in that pouty picture it looks like you have a halo!

What is it with Georgie and the camera? Sara didn't like to be filmed, either. Does your camera look like a monster or something?

Oh those pictures are adorable

You guys are too funny! Can't wait to see the final shot on the blog.

I love the expression on Georgie's face in the second photo... so sad...

I'll have to remember to pass on that warning to my son about the lack of availability of things to expats. That may be important to him.

With the very first picture, I thought maybe you both had peed on the floor again and Serge had scolded you. :-D

Admit it. You really did wet. You were trying to imitate Georgie to a tee.

I'm with Fatinah: you're a sad angel in the first pic. I wonder how JeepGuy gets all those happy dog shots of his pup. (Ours makes a sad face too.)

I'd like you whether your pants were wet or not. I'm just that kinda' guy.

I'm surprised Georgie's that big! Somehow, I had him pictured as a smaller dog. Doesn't dimish his adorableness though! :)

Just a friendly warning from another expat. Occasionally Hulu "catches on" to HotSpot and says "it appears you are using a proxy server...." and won't let you access the site...relax and try another day. It never lasts.

Georgie looks rather distressed in the last photo. Perhaps Serge needs to work on his technique?

What a bunch of cuties. Georgie will be so happy when you guys get home from your travels!

No doubt Georgie has a sad face in the photos because you're holding him up and showin' all his bidness under there. The one of Serge "inspecting" Georgie is kinda gross. Georgie is a good sport to put up with the likes of you two! :-)