* I know I'm not the only one, but dang do I love that show Glee. And the music! I just had to have Golddigger and Hate on Me. When we were in Massachusetts, I picked up the CD for the music only to learn that a second CD will be out next week. Anyway getting the CD was great because all four of us immediately ripped it to our computers. Itunes makes that kinda difficult and I was actually going to buy it on Amazon, except that they don't sell MP3's in Canada. Amazon had a three dollar coupon which I wanted to use on an import that is $27 at the store but only $5 on Amazon.com. Whenever I try to shop there from up here, they tell me they can't sell to me (hear that music industry? refusing to sell to people, excellent business model!) because I am in Canada. So imagine my surprise when they still wouldn't sell to me when I accessed the site from the states. I fired off a letter - I am an American Citizen, using a US bank credit card but I still get refused. Turns out they won't sell to me because the billing address for the credit card is in Canada. So lame, I can walk into a shop and buy any music without divulging my residency, why would Amazon do that? Makes me not want to shop there now. My friend let me use his card though so I still picked up that import for two bucks. Maybe I'll give them another chance. 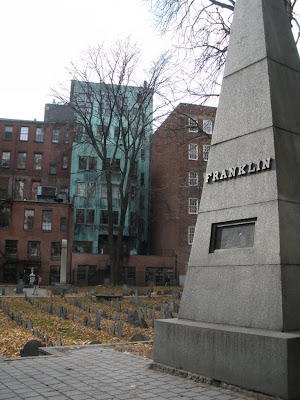 * Thanks everyone for pointing out the correct location of Benjamin Franklin's grave. But you know, Ben was big in Boston too, born there in fact, so one naturally assumes that the big monument to Franklin in the cemetery is his grave.

* Having lived up here for 9 plus years now, it is surprising that I have never once eaten at one of the middle eastern food chains. That all changed last night. Serge is always chastising me for my tendency to always want to do the same things, eat at the same places etc, but whenever I cave to his mix-it-up pep talks, I usually regret it. In the place I went, called Amir, they had pictures of everything but it all kind of looked the same. I decided to try the thing that looked easiest to pronounce. It was called Shawarma, which I imagined to be named after some arab version of Jeannie from I Dream of Jeannie. I didn't hate it, though I suspected the red thing was beets that was in it. Not a big fan of the betteraves, moi. It came with garlic potatoes which might have been more aptly called potato garlics. My poor students in the class I taught right after that.

* It's already December and the Christmas cards haven't even been started on yet. We've been trying to get some kind of holiday picture done to include with the cards but we are having a rough time of it because Georgie refuses to hold a pose of any kind. We're toying with other ideas for the picture now. Here's a failed attempt: 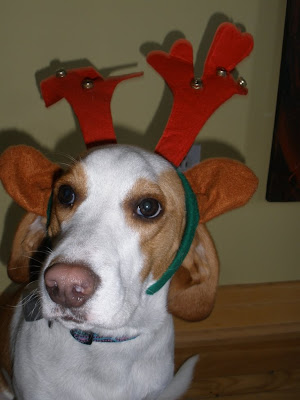 * The tree is up but it's not a real one. I finally decided that it would be better to have an artificial one so that when we go away, we don't have to worry about watering it. My only complaint is that it's too perfectly shaped. That doesn't seem real to me. I might tweak some of the branches to give it a couple flaws. Oh and a little pine odor spritzer so I can pretend to have a live tree. (Why do I want to say "be having" instead of "have" there? It can't be right but it sounds more like what I want to convey.) 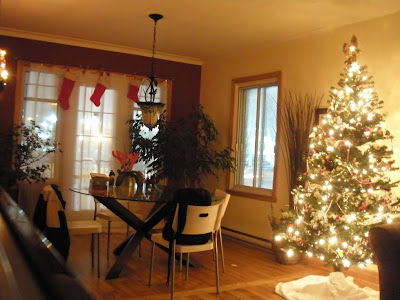 * Okay the news. We're taking off next week to undisclosed Caribbean location. I'm super excited since it's another place, country in fact, that I've never been to. It's a gift which is wonderful. We're lucky to have such generous people in our lives. Anyway, I can't really talk about where we're going in detail because, well, you're just going to have to figure it out. Think Desi Arnaz. A week of tropicality and cocktails, woo hoo! Now I must go and work on the Christmas cards. Happy hump day peeps.
Posted by tornwordo at 7:06 AM

Nice to hear I'm not the only one who seems to be trying to wear the tracks off the GLEE CD. Love that show...and those tunes.

Georgie's just adorable. Just a shot of his adorable nose would make a lovely Christmas card.

You'll have some 'splainin to do about your trip. I want pictures.

Georgie might hold still if you get that headband off of him. Animals always look so sad when we try to outfit them. Poor thing. So cute. (My kids do the same thing to Sophie. She looks like she's being punished.)

Your apartment looks great with the tree and stockings and all. I think this is the first time I've seen that view of the table, too. I remember when you bought it, but I don't think I've seen such a good picture of it. It looks really nice.

Tropicality?? Is that a word? Sounds lovely, nonetheless. We've been having the same trouble getting a picture of the three of us for a Christmas card. Mason just doesn't want to do it -- he'd rather play the baby jesus in the church production. Cheers.

Izzy runs any time I pick up the camera or looks like he has just been chastized. Love the tree! Are you going to Porta Rica?

Yeah, I get annoyed at Amazon, too, when there is some stupid hold up because I live in Canada. What really irks me, though, is if you buy something at Amazon.ca it's STILL more expensive than buying it on the US site and paying international shipping. I blame Canada for that!

Very nice looking tree and the puppy is so cute.

The Glee soundtrack is my favorite album of 2009! Golddigger and Defying Gravity are my two favorites. iTunes has this new feature that you can share the music with the other computers in your house. I haven't tried it yet. I'm a music hog.

I can't believe you have your tree up! I gotta get after this tree business!

I wish that I could travel to Cuba. Stupid retrograde U.S. foreign policy.

Maybe you can get around the Amazon thing by having a US-based credit card with the billing address of your mom or your friends in Boston. When the bill arrives, they simply write "Forward to..." and your actual address and let the postman forward the bill to you.

I haven't started our card either, nor have I assembled or decorated our tree. LOVE the photo of Georgie with the antlers!

I think you can go there from Canada, just hoop jumping from the U.S.

Georgie's pic is just fine for a card. Cut him a break.

As for amazon, I feel the same way about iTunes from other countries. They have other music not in the U.S. and alternate takes, etc, but I cannot purchase them b/c ....well, I dont' know why not. Stupid.

I got it! You're going to 623 East 68th Street, New York, New York -- which is really in the middle of the East River, so you'll be spending a week on a party boat of some sort. Say hello to the Mertzes for us.

And Georgie don't need no silly Xmas headwear. Just find the right picture of him and give it a good caption. Like that one of him sleeping on the afghan -- "...while visions of sugar plums danced....". See?

Fabulous, all of it, tree, puppy, tropicality. Subtle clue there as to location. Do you have to be a bit cagey about it because of your dual citizenship? I mean, Canada doesn't have a problem with it, right? Have a fantastic time, can't wait to see photos.
And I say dispense with the Christmas cards all together; just post a great photo and send all your loved ones the link. Life is too short.

It's early December and you are worried about xmas cards? I usually send mine out Dec. 26 with a note saying "I'll do better next year". No one believes me, so it's cool.

Have fun on your trip. Cuban men are H-O-T!!! Take lots of pics.

Tree looks fine to me, but then what do I know?

Good shawarma is delish. I love it. We have very few Middle East chains in NYC, mostly street carts. Chickpea is the only one we have and it's Israeli, not Arab.

Oh, and have fun in Cuba.

I *love* Hate on Me, and I love the way Mercedes performed it on the show. It rocked.

I used to have that problem while living in Japan. All the time, actually!

Your tree is just lovely, and I hope you two have a great getaway. :)

tankmontreal said...
This comment has been removed by the author.
12:25 PM